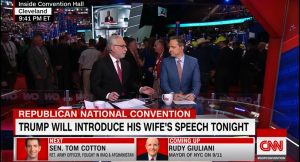 Darryl Glenn in his customary political spot: Wayyyy in the back.

Let’s be clear from the get-go here: Republican Senate candidate Darryl Glenn is not going to defeat Democratic incumbent Sen. Michael Bennet next week. Not only is Glenn going to lose to Bennet — it’s a good bet that Glenn will lose by more than 20 points, which would exceed the combined margin of victory in the last four U.S. Senate races in Colorado combined.

Reality aside, we fully expect Glenn to declare victory in the 2016 Senate race at some point in the next eight days. Claiming victory against Bennet would be the obvious next step for a candidate who would once again have you believe that a new poll miraculously shows a blowout race to be coming down to the wire.

Here’s an excerpt from another Glenn fundraising email that we received this morning: 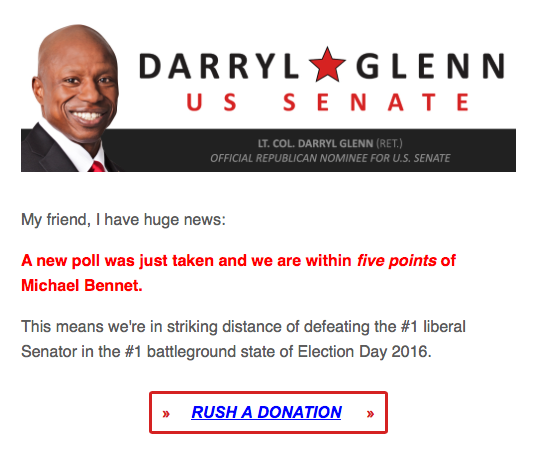 You may recall that Glenn sent out a similar fundraising pitch just three weeks ago in which he confidently claimed that he was “polling in a virtual tie with Michael Bennet.” Glenn’s campaign appeared to have been pointing toward a Gravis Poll — commissioned by Breitbart — that inexplicably showed the El Paso County Republican with a two-point lead on Bennet (Gravis later showed Bennet ahead by 10). A few days after Glenn’s “virtual tie” claims, Quinnipiac University released new polling data indicating Glenn to be 18 points behind Bennet, which more or less lined up with the rest of the publicly-available polling in Colorado’s Senate race.

Glenn doesn’t actually link to a specific poll in today’s fundraising email, though there is apparently some new data from YouGov indicating a five-point margin between the candidates. We haven’t bothered to look at the methodologies of this new poll because it is so far removed from the trend lines in this race that it defies credibility. According to Real Clear Politics, there are 17 available polls on Colorado’s Senate race dating back to July; 11 of these polls show Bennet with a double-digit lead over Glenn. There were six public polls in this race conducted during the month of October, and even if you include the results of this dubious YouGov poll, Bennet still averages a 12-point advantage over Glenn.

Campaign time is almost up for Glenn, the man we’ve called the “Worst Statewide Candidate in Colorado History.” If he wants to spend his last week as a U.S. Senate candidate pretending to be on the doorstep of victory…well, whatever. Reality will intervene soon enough.