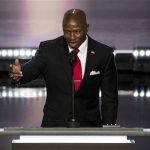 That’s why he spends a lot of his time in DC, not Colorado. That’s why he’s pulled out of or declined at least SIX invitations to appear with me, one-on-one, in the last month alone.

What he doesn’t understand is that this election is for the people- not for himself. Like I said: Typical Washington insider.

But the thing is I can’t really blame the guy. Because with less than 29 DAYS to go before Election 2016, I’m polling in a virtual tie with Michael Bennet. And right now, he’s scared. [Pols emphasis]

A “virtual tie!” That is shocking news for this race–so shocking that we resisted checking the facts to make sure it’s right. But after a few minutes of telling everyone who would listen about this dramatic turn in the Colorado U.S. Senate race, we figured it would be a good idea to make sure there’s some truth to it.

That’s odd–Real Clear Politics’ average of polls has Michael Bennet leading Darryl Glenn by an average of 11.3%? In fact, according to RCP there has only been one poll of this race inside the margin of error since July?

We were really excited for Glenn for a moment there, but unless his campaign can produce a poll that actually shows him in a “virtual tie,” or for that matter anything other than polls showing him getting his ass kicked by a lopsided margin, we’re going to have to conclude, as much as we want to believe it, that this claim from Darryl Glenn to be in a “virtual tie” with Michael Bennet is factually deficient. Or, perhaps Glenn misspoke and meant to say that he and Bennet both “wear ties” sometimes.

*Never mind, we can’t do this with a straight face. It’s a goddamn joke.