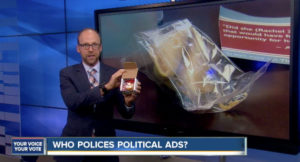 You’ve seen plenty from us in this space about the so-called “China Girl” attack ads taking place in SD-19 (Arvada, Westminster), which we’ve called “The Most Knowingly False” advertisements in Colorado politics. On Monday, Marshall Zelinger of Denver7 reported on the latest iteration of these patently false claims — now including fortune cookies — which have long since crossed the line of negative advertising and have risen to the level of outright fiction.

In the past three months, Denver7 and its partner, PolitiFact, have rated two CCAG campaign mailers attacking Zenzinger “Pants On Fire,” the worst rating reserved for ridiculous statements.

On Oct. 19, Zenzinger filed a complaint with the Jefferson County District Attorney’s Office accusing CCAG of repeatedly attacking her with the same false campaign mailer: She had voted to use taxpayer money to take a trip to China.

The fortune inside the cookie says, “Past actions are the best predictors of future behavior, so remember Zenzinger’s actions” and directs you to a website that does not reference the China claims.

The cookie also comes with a business card that reads: “Please enjoy this fortune cookie to commemorate Rachel Zenzinger’s vote for a taxpayer-funded trip to China while serving on the Arvada City Council.”

Zenzinger has never been to China and ultimately voted to not use taxpayer funds for a trip to China. [Pols emphasis]

If you haven’t been following this story about Republican attacks on Democrat Rachel Zenzinger, that last sentence above is the key here. Third-party groups like the GOP-aligned “Colorado Citizens for Accountable Government” believe that this narrative is the most effective line of attack they have against Zenzinger, and they may be correct; the problem, obviously, is that this isn’t even sorta true. Not only has Zenzinger never been to China, but she also was adamant on the city council that public funds would not be used on any sort of “sister cities” trips for public officials. Again, from Denver7:

The current mailer that the DA is reviewing cites a comment that Mayor Williams made to PolitiFact in July. “Did (Zenzinger) support a motion that would have funded through city funds the opportunity for her to go? Yes, she did,” the mayor said.

But the flier doesn’t mention that the mayor stressed that Zenzinger also made the subsequent successful motion “with the explicit direction that no city funds be used.” [Pols emphasis] The mailer also left out that the mayor said: “My negativity toward their ad is that it implies that she actually took that trip, and she didn’t.”

In reality, Zenzinger actually did the exact opposite of what these attack ads continue to claim. There is a law in Colorado that prohibits the dissemination of “knowingly false” information intended to sway voters in a particular campaign, but Zelinger quotes an election law attorney in his story who calls the statute “toothless.” In his television report, which led off the 6:00 pm news on Monday, Zelinger rightly asserts that most SD-19 voters won’t know about these falsehoods unless they are watching Denver7.

As Zelinger also notes in his story, “Colorado Citizens for Accountable Government” isn’t exactly standing proud behind their attacks:

On Monday, an official for Colorado Voters for Accountable Government told Denver7 the group’s lawyers advised them not to comment on the dispute because of the pending complaint with the district attorney

This is a big issue, and not just for the 2016 election cycle. It doesn’t take a whole lot of imagination to see where this goes from here; if these sort of attacks are allowed to go unpunished, the political mudslinging will soon reach an entirely different level of terrible. If you can claim that a politician took a taxpayer-funded trip to China that never happened, what’s to stop someone else from producing advertisements that another candidate is a serial rapist who has direct ties to ISIS?

If Jefferson County District Attorney Pete Weir doesn’t prosecute this “China Girl” case, then there’s no point in even having these laws on the books. This shouldn’t be happening in 2016. It definitely can’t be allowed to continue in 2018.