We’ve been talking quite a bit in recent days about a false allegation being used repeatedly against SD-19 Democratic candidate Rachel Zenzinger–a claim that Zenzinger “voted to use public funds for a trip to China as Arvada City Councillor.” This allegation was originally used against Zenzinger in her 2014 race, where it was swiftly ruled “Pants on Fire” false by fact-checkers. Not only did Zenzinger introduce a motion requiring that no public funds be used on any such trip, Zenzinger never went to China.

After another mail piece from Republican-aligned attack group Colorado Citizens for Accountable Government featuring Zenzinger wearing a Vietnamese-style hat arrived in SD-19 mailboxes last week, Zenzinger’s campaign filed a criminal complaint with Jefferson County DA Pete Weir. But then just a couple of days later, before anyone could even address that complaint, a small package began showing up in SD-19 mailboxes: 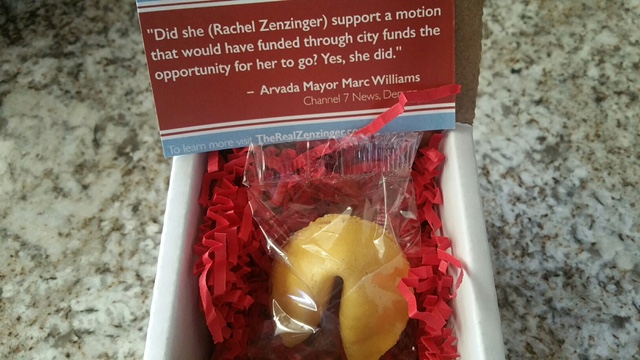 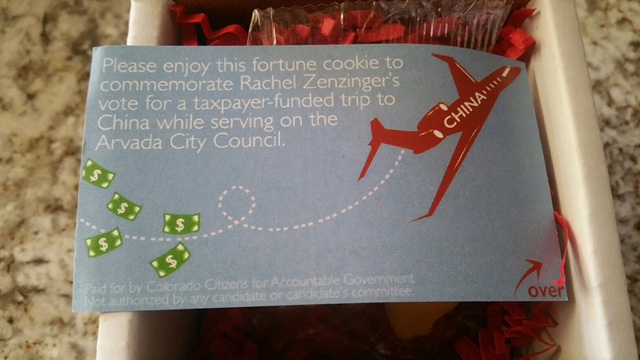 A press release yesterday from Zenzinger’s campaign makes no attempt to conceal their anger–and at this point, who wouldn’t be?

Demonstrating the highest degree of disregard for the Jefferson County District Attorney’s office, a Republican group called Colorado Citizens for Accountable Government sent the packages with the false message that the cookie commemorates “Rachel Zenzinger’s vote for a taxpayer-funded trip to China.” Zenzinger has never been to China.

Just two days previously, Zenzinger had filed a complaint with the DA’s office about false mailers that implied she had taken a personal vacation to China using taxpayers’ money. In public statements following her interaction with the DA’s office, Zenzinger called upon her opponent, Sen. Laura Woods, to disavow these false ads. Woods has not responded.

“As far as we can determine, this strategy by Woods’ supporters represents a new low in Colorado political campaigning, and in fact it is not a strategy at all,” said Zenzinger. “The word strategy implies some element of creativity, and there is none here. Some desperate Republican henchman decided at some point it would be better to create this outright lie, rather than lose the election and possibly lose majority control of the Senate.”

The majority leader in the Senate is Bill Cadman, who has publicly acknowledged that he will do whatever the Koch Brothers tell him to do, with no regard for ethics or even legalities. It is a violation of Colorado Revised Statue 1-13-109 to distribute material in an election that is knowingly false, and the crime is considered a first class misdemeanor.

“I’m looking into the future, and I would say fortunes look bleak for the people who concocted this criminal ad campaign,” said Zenzinger.

Ever since it became clear that this Republican attack group was focusing almost solely on a proven-false allegation, doubling down on it after adverse fact-checks and even deceptively quoting from those fact-checks in new mailings, we’ve been trying to figure out the real motive for this almost unprecedented campaign of lies against Zenzinger. Obviously, the “China Girl” attack polls well for the GOP, but there’s more to this strategy at this point. Is it possible that Republicans are hoping the backlash over this lie will help them some way? In these low-information downballot races, everyone is looking for an edge to cut through the noise and raise awareness about the race any way they can.

After some deliberation, we do think it’s possible that this is a test–to see if the continuous application of an demonstrable falsehood in a low-information race, with all the outrage, criminal complaints, and hostile press coverage that this falsehood is ginning up, can still be a net positive for the Republican candidate.

On an objective, nonpartisan level, it’s a test everyone should hope they fail.