We’ve talked a number of times about a specific line of attack targeting Democratic SD-19 candidate Rachel Zenzinger, falsely alleging that Zenzinger had “voted to use taxpayer money on a trip to China” while serving as an Arvada city councillor. As Politifact Colorado and every other objective look at this accusation has found, it’s completely false: not only did Zenzinger never visit China, she introduced the motion barring the use of taxpayer dollars on any such trip.

The “China Girl” attack on Zenzinger was thoroughly debunked by in 2014 when it was originally used, which made its recycling in 2016 much more arguably a case of making a knowingly false statement in a political ad–a crime under Colorado law.

Regardless, this week the organization responsible for the ad ruled “Pants on Fire” by Politifact Colorado, Colorado Citizens for Accountable Government,  sent another mail piece to SD-19 voters making the same false charge: 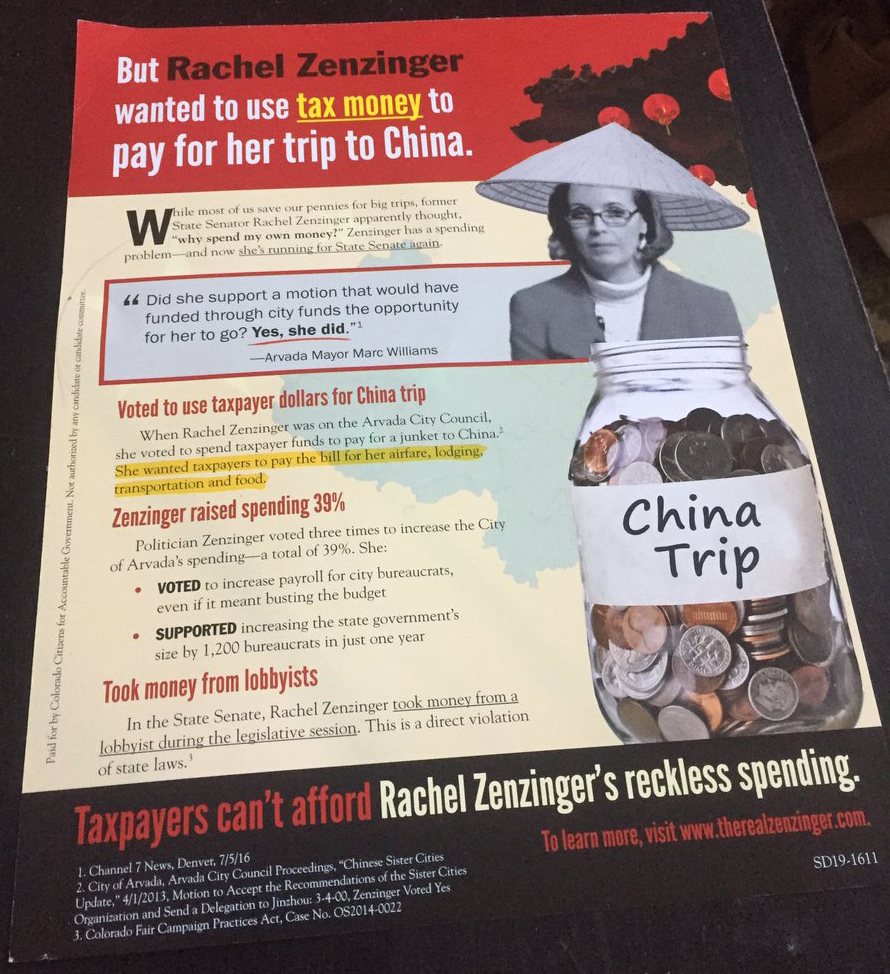 Now, the first problem with this mail piece is the eye-poppingly racist Photoshopping of a traditional Vietnamese straw hat, known as a non la, onto Rachel Zenzinger’s head. We shouldn’t even have to point out that this ad is about an alleged trip to China, which is not Vietnam, and they in fact wear different straw hats in China.

We assume nobody at Colorado Citizens for Accountable Government could, you know, tell the difference.

But as bad as the racism in this latest mail piece is, that may not even be the worst part. Looking closely at this ad, you can see they quote the Mayor of Arvada, Marc Williams. The citation for that quote on this mailer is “Channel 7 News, Denver, 7/5/16.”

Understand this, folks: that’s Politifact Colorado’s fact-check! The one that ruled this claim “Pants on Fire” false! The mailer conveniently omits the rest of Williams’ statement in that story:

[Williams] stressed that she also made the subsequent successful motion “with the explicit direction that no city funds be used.” [Pols emphasis]

This mail piece was produced after Politifact Colorado’s July 5th fact-check of CCAG’s previous mailer on the same subject. That means that Sen. Laura Woods’ allies at CCAG read that fact-check, disregarded its conclusion, and used a hacked-up quote for it to further mislead voters about the same completely debunked charge.

The only reasonable conclusion with all these facts in mind is that CCAG knows they are lying, and are overtly contemptuous of the media’s ability to correct the record. They have concluded that more voters will see their false accusation than will ever see the debunking, and they simply have no sense of accountability to anyone. We can’t imagine what Alan Gathright and the folks at Politifact will say about being given this brazen middle finger by a major Republican 527, but that’s obviously what they’re doing.

If that is not outrageous to every voter on an objective level, we don’t know what is. And if there was ever a case ripe for prosecution under Colorado’s much-debated law against knowingly lying in our elections, this has to be it.