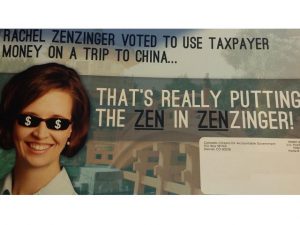 A new fact-check from Politifact Colorado’s Alan Gathright posted at Denver7 is most unkind to new mailers hitting in the pivotal SD-19 race in Arvada and Westminster, where an old and already proven false allegation against Democrat Rachel Zenzinger has apparently been recycled for the current election cycle:

For the second straight election, a conservative group has attacked a Democratic Colorado state Senate candidate with the same claim: “Rachel Zenzinger voted to use tax dollars to take a taxpayer-funded junket to China.”

In late June, political mailers started arriving at homes in the northwest Denver suburbs of Senate District 19. They featured a photoshopped image of a smiling Zenzinger wearing sunglasses with dollar signs on the lenses and an ornamental Asian bridge in the background…

The same group attacked Zenzinger for a taxpayer-backed junket to China in 2014. But just as before, there are key problems with these attacks.

“I’ve never been to China,” Zenzinger told PolitiFact. “I was joking to friends, believe me if I had been to China, I would have had so many pictures on Facebook they wouldn’t have to Photoshop my picture in the ads.” [Pols emphasis] 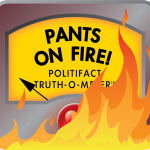 Even better, and again this is all well-reported common knowledge after fact-checkers tore the claim apart in 2014:

Also, while on the Arvada City Council in 2013, Zenzinger made — and then voted for — a successful motion explicitly prohibiting use of taxpayer funds for a proposed sister-city delegation to China.

In short, not only is there zero truth to the allegation that Zenzinger “voted to use taxpayer funds to visit China,” everyone knew there was no truth to it two years ago. To reuse this debunked story in new attack mailers against Zenzinger strongly points to a conscious disregard for the truth in the state’s most important legislative race. It’s one thing to make stuff up, it’s another to keep using made-up stuff after it has been debunked.

That takes an additional degree of chutzpah.

It’s against the law in Colorado to make false statements in political communications, but the statute has proven notoriously difficult as a means of bringing actual charges–mostly because prosecutors are reluctant to criminalize such speech-related “political questions.” With that said, it’s pretty hard to argue that this lie was not knowing and deliberate, because it’s not a new lie. We’ll be interested in seeing if that makes a difference.