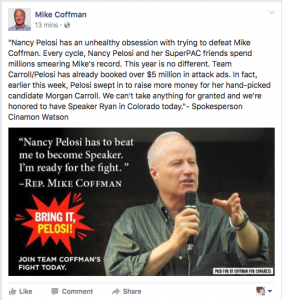 House Speaker Paul Ryan was in Wyoming this week for a big meeting of major Republican donors and associated advisors. Today, Ryan is in Colorado helping Rep. Mike Coffman (R-Aurora) to raise money at a super-secret luncheon of some sort.

We can’t tell you much more about where Ryan is stumping with Coffman, or for how long, because Coffman’s own campaign won’t really talk about it. Check out the weird statement that showed up this morning on Coffman’s campaign Facebook page, in which Democrat Nancy Pelosi’s name is mentioned four times before Ryan’s name comes up.

“We can’t take anything for granted and we’re honored to have Speaker Ryan in Colorado today,” says Coffman spokesperson Cinamon Watson.

Anyhoo…so, the Speaker of the House is in Colorado today, and nobody wants to talk about it.