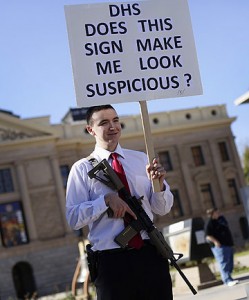 As posted moments ago by the National Rifle Association's Institute for Legislative Action:

Tomorrow, April 3, President Obama and Governor Hickenlooper will be promoting gun control at the Police Academy in Denver beginning at 2:30 pm.  We ask all Second Amendment supporters to join the NRA in protesting this event, and to stand and fight for the Second Amendment.

Although this event is closed to the public, we are asking that you attend and protest this event in Denver and respectfully let President Obama and Governor Hickenlooper know that you are strongly opposed to their anti-gun agenda.  Take a stand for the Second Amendment and let your voice be heard tomorrow.

Details for this event are provided below:

Send a clear message to President Obama and Governor Hickenlooper that we will stand and fight for the Second Amendment!

Please spread this message to family, friend and fellow gun owners. You are also encouraged to bring signs.

The chance to protest President Barack Obama and Gov. John Hickenlooper in one spot tomorrow, despite the fact that the event is closed and located indoors, probably falls somewhere between Woodstock and a spiritual pilgrimage in terms of importance your average Rocky Mountain Gun Owners devotee. Short notice or no, if Obama and Hickenlooper together doesn't churn out an epic pro-gun mob, it's tough to imagine what will.

Somebody should let the banner plane guys know they usually close the airspace over the President.