Vanquished 2022 gubernatorial candidate Heidi Ganahl, as we’ve discussed in this space a number of times, was and remains a dyed-in-the-wool ideological “movement conservative” who, when given the chance to reinvent herself into a more electable image after winning the June 28th primary, instead doubled down on her conservatism and campaigned against vaccine requirements, embraced election conspiracy theorists, and promoted fringe rumor-mill moral panics like the “furries” supposedly taking over the hallways of Colorado public schools. Ganahl also vowed to undertake just plain kooky actions like repealing every single one of Gov. Jared Polis’ executive orders, which includes disaster declarations and the state’s condemnation of Russia’s invasion of Ukraine.

After Ganahl’s approximately 20-point trouncing one week ago today cemented her status in history as a hopelessly overmatched placeholder candidate, one might have thought that Ganahl would take a break from the crazy rhetoric of the campaign trail, if for no other reason than the race is over. But again, Ganahl being the committed ideologue that both powered and doomed her campaign she is, can’t help but continue hucking spitwads from the sidelines: 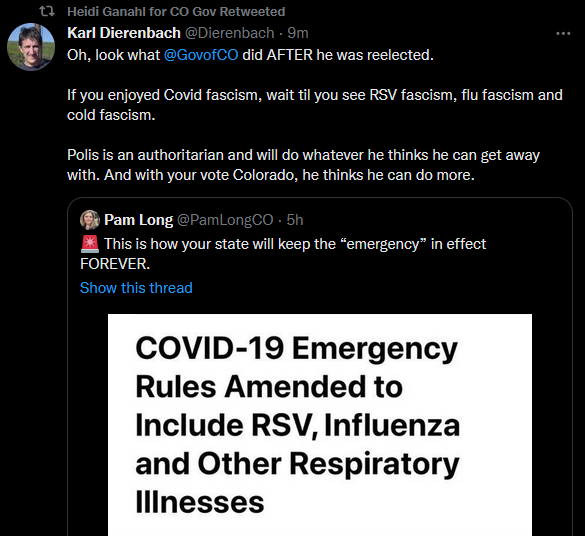 If you read the executive order issued by Gov. Jared Polis last Friday, you’ll quickly discover there’s nothing “fascist” about it. Polis is responding to this year’s very large outbreak of Respiratory Syncytial Virus (RSV), as well as what’s forecast to be a nastier-than-average flu season due to these illnesses’ resurgence after the lifting of COVID restrictions. There are no public health restrictions, mask orders, lockdowns, or any other such measures in this order–it’s about allowing hospitals filling up with sick kids to function under staffing shortages and ensuring emergency room patients aren’t ripped off by surprise billing.

This is what you learn when you take five minutes to understand what’s actually happening before lighting your hair on fire and crying “fascism” on social media. We expect that elementary critical analysis from every responsible citizen, to say nothing about someone aspiring to be governor. Ganahl’s friend Dennis Prager, who caused a one-man public health scare when he deliberately tried and apparently succeeded in catching COVID-19 at a Ganahl campaign event, might approve. For the rest of us, this unhinged reaction to a necessary public health measure is precisely why Ganahl deserved to lose by 20 points.

It won’t be the last time Heidi Ganahl shows how Colorado dodged a metaphorical bullet.

But here’s one for the record.