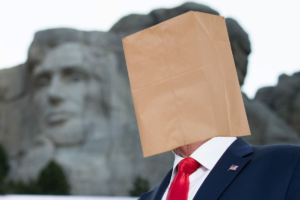 Despite the unexpectedly poor showing for Republicans across the nation in last week’s midterm elections, especially but not limited to Republicans loyal to and boosted by ex-President Donald Trump, all news reports as of this writing indicate that Trump plans to proceed with his “very big announcement” tomorrow at Mar-a-Lago that he’ll be running for President once again in 2024. CNBC reported Saturday:

“We had tremendous success — why would anything change?” Trump told Fox News on Wednesday.

“I spoke with the President Trump this morning. He was on the golf course and I talked to him about Tuesday which is really his focus,” Miller said on the podcast of Steve Bannon, a former senior Trump advisor, NBC reported.

“He said, ‘There doesn’t need to be any question. Of course I’m running. I’m going to do this and I want to make sure that people know that I’m fired up and we got to get the country back,’” Miller said.

As the New York Times reports, Trump’s determination to get back in the ring seems to have only hardened since last Tuesday’s election despite the bad night for his favored candidates–meaning Trump is not listening to Republicans begging him to put off this announcement until after the U.S. Senate runoff in Georgia next month:

Mr. Trump’s plans to run for president, which he is expected to announce on Tuesday, could force the issue in ways not seen since his first campaign, as party leaders are asked to declare their allegiances to him or to other potential rivals…

Representative Elise Stefanik of New York, the third-ranking House Republican, endorsed Mr. Trump for president on Friday ahead of his anticipated campaign announcement on Tuesday.

“President Trump has always put America First, and I look forward to supporting him so we can save America,” Ms. Stefanik said on Twitter.

Rep. Elise Stefanik, as readers recall, tried to expand her sphere of influence to include the Republican nominee in Colorado’s brand-new CD-8 by endorsing both Barb Kirkmeyer and primary rival Jan Kulmann. Stefanik is still considered upwardly mobile in the House GOP caucus, and a candidate to someday replace GOP House Leader Kevin McCarthy. Last week, Trump endorsed McCarthy’s re-election as GOP Leader and Stefanik as GOP caucus chair, and it’s hard to imagine McCarthy not returning the favor.

And we assume Colorado’s Rep.-by-a-thread Lauren Boebert will be on hand tomorrow evening in Palm Beach.

From there, Trump’s campaign will impose a loyalty test that every Republican will have to reckon with for themselves. After the violence on January 6th and many Republicans including McCarthy turned against Trump briefly only to come crawling back, realistic hope that this party might someday stand up to Trump was largely dashed. If Trump blows through his primary opposition this time as he did in 2016, Republicans will face the question Joe O’Dea stumbled over disastrously on the campaign trail: whether to vote for Trump if he wins the nomination, or commit the greatest sin any Republican can.

In the end, even Joe O’Dea was prepared to dance with the Trump who brought him.