What Trump is doing here is actively sabotaging O’Dea’s chances.

In order to have a chance at pulling off an upset against Bennet, O’Dea needs the Trumpist Republican base fully behind him and the support of independents and moderates across Colorado. He can’t win without both parts of that equation – and Trump just made it much harder for O’Dea to keep the GOP base strongly aligned behind him.

The back and forth is just the latest example that Trump cares about himself first, second and third – and does not put what’s best for the Republican Party anywhere in that mix.

So much for Joe’s coalition outreach/party unity effort to #Trump voters. 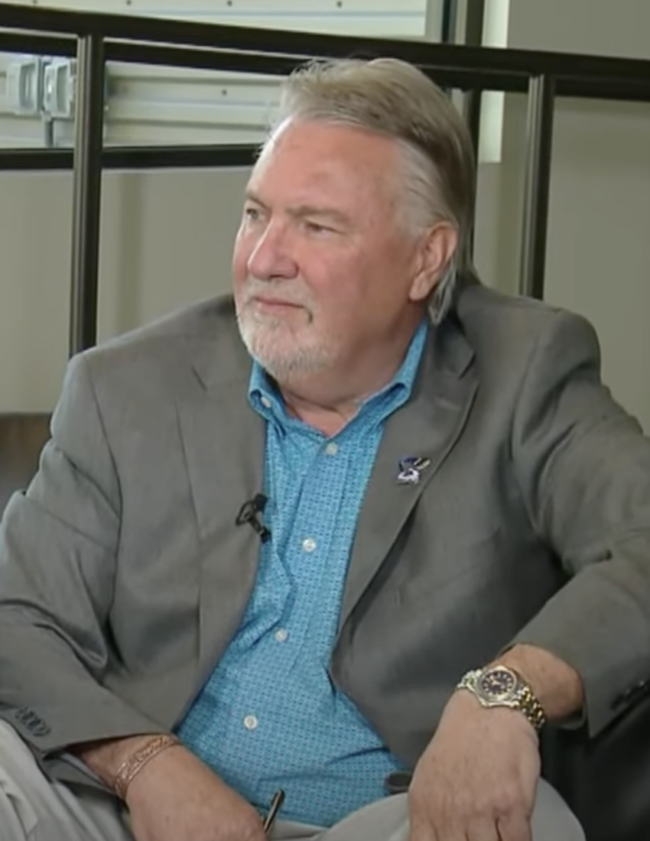 Speaking on CNN’s State of the Union yesterday morning, Republican U.S. Senate candidate Joe O’Dea was asked about his evolving position on former President Donald Trump, progressing from promising to support Trump in 2024 if Trump wins the GOP nomination to walking this back after winning the Republican primary–though very careful to avoid promising not to vote for Trump if he wins the GOP nomination. As reported by Business Insider:

O’Dea, who is running as a center-right candidate, called Jan. 6 “a black eye on the country,” adding that he has been “very vocal” in saying he thinks Trump “should have done more to keep the violence from heading towards the Capitol.”

He continued: “I’m going to actively campaign against Donald Trump and make sure that we’ve got four or five really great Republicans right now.”

First of all, as readers know, O’Dea had a very different view of January 6th during the  primary:

“I had friends that were out at January 6, they went nowhere near the building,” O’Dea said. “That’s a rally in my opinion.”

But we’ll set that aside for a moment. Joe O’Dea is certainly not unique in “evolving” away from deeply unpopular ex-President Trump after winning his Republican nomination in order to appeal to the general election audience. But voicing this opinion on the national Sunday morning news appears to have finally put O’Dea on Trump’s radar. This morning, Trump personally responded to O’Dea’s disloyalty with a trademark nastygram sure to cost O’Dea support among the Republican base: 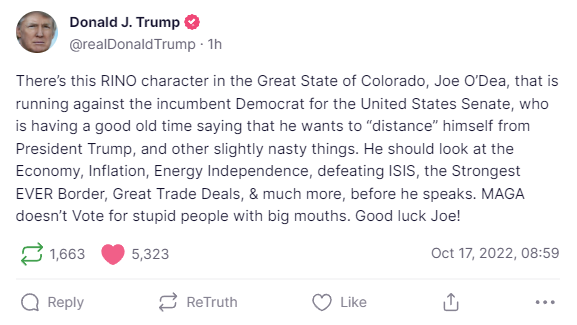 Trump’s broadside against O’Dea this morning is prompting some hot takes suggesting this attack from Trump might be helpful to O’Dea. There may be some number of swing voters in Colorado not yet aware that O’Dea is running a triangulation game in this blue-state underdog race, but at this point there probably aren’t that many. On the other hand, there is a very large segment of Republican MAGA base voters who have resolved to hold their proverbial noses and vote for O’Dea despite his feints to the left, and they all just got told in the clearest terms Trump can manage not to vote for Joe O’Dea.

It’s a dicey game that O’Dea has been playing from the beginning, and the calculation has always been that triangulating off the former President’s unpopularity was worth more in attracting swing voters than it cost O’Dea with the loyalist Republican base. The great risk in running this kind of counter-brand campaign is that one can end up with no base of support at all, or a base so tepid after being maligned that they’re demoralized and unmotivated.

The one thing we can say for sure is that if Joe O’Dea loses as every poll predicts, Trump will want the credit.