Sabato’s Crystal Ball: Governor’s Race is Over, CO-08 a Toss-Up

Many Colorado voters will be receiving a ballot in the mail one week from today. As we inch closer to actually voting in Colorado, it looks like the political environment is trending in the left direction.

According to the prognosticators at Larry Sabato’s Crystal Ball (The University of Virginia Center for Politics), there’s significant movement in Colorado: 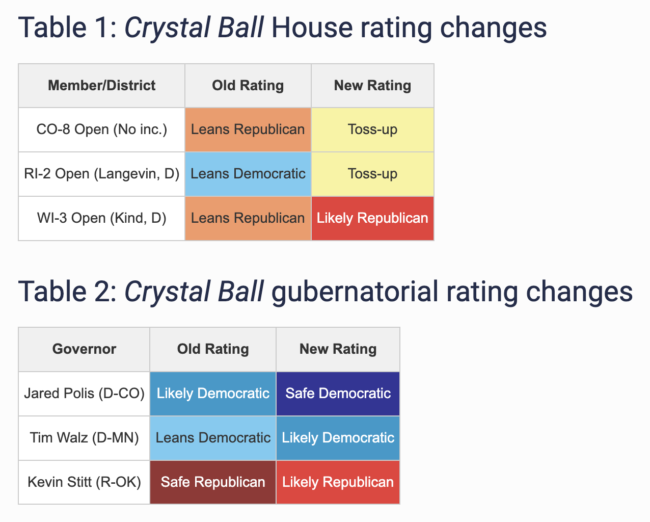 We can’t argue with either assessment here. Let’s start in Colorado’s newest congressional district, where “Sabato” is rethinking some old thoughts:

We may have been a bit too bullish on Republicans in CO-8, the newly-drawn district that Biden won by about 4.5 points. This is the kind of swing seat that an opposition party should be able to flip in a midterm, but it remains close and competitive with heavy and bipartisan outside spending. Moving this seat to Toss-up also helps to balance out the Leans Republican group a little bit, as the GOP grip on a number of these is tenuous… 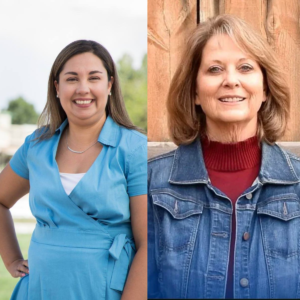 The battle between Democrat Yadira Caraveo and Republican Barbara Kirkmeyer continues to generate significant outside spending — it is now among the top dozen most expensive House races in the country — which is another reason to believe that CO-08 is a true toss-up. If CO-08 was the Republican-leaning district that the GOP thought it was, this kind of spending wouldn’t still be necessary.

In the race for Governor, “Sabato” sees the same thing that everyone else does: Incumbent Democratic Gov. Jared Polis is in no danger from the bumbling carnival that is Republican Heidi Ganahl’s campaign for governor:

In Colorado, we are confident enough in Gov. Jared Polis’s prospects that we are upgrading his contest from Likely Democratic to Safe Democratic. Republicans fielded University of Colorado Board of Regents member Heidi Ganahl — who is the sole remaining GOP statewide official left there — but the race hasn’t emerged as a top contest.

Recent polling has shown Ganahl trailing Polis by 17, 17, and 18 points, respectively…and those polls don’t fully account for the tremendous damage Ganahl inflicted on herself with 10 days of crazy talk about “furries” invading Colorado schools. At the beginning of October we changed “The Big Line” to give Polis to a 95% chance of winning, and that still might be too conservative.

Finally, here’s what “Sabato” has to say about Colorado’s Senate race:

A late Republican break could also endanger Sen. Michael Bennet (D-CO), but as of now he appears to be fine.

Incumbent Democratic Sen. Michael Bennet is also theoretically in danger of being struck by a meteor. Bennet isn’t as safe as Polis, but national Republicans are still “keeping an eye on” Republican candidate Joe O’Dea despite the fact that voters are going to start marking ballots in less than a week. If Republicans haven’t dropped significant resources on O’Dea’s behalf within the next 10 days, it will be too late to change anything.