UPDATE: Not just Rep. Lauren Boebert–here’s the chair of the Colorado Republican Party welcoming a kinder, gentler fascism’s return to power in Italy:

Italy’s first female Prime Minister is a strong pro-life woman who believes the family is the foundation of society and that every human being is precious. pic.twitter.com/0OSIzZdxjx

All we can say is “Dio, patria, e famiglia!” We can’t wait to find out if Joe O’Dea agrees.

Giorgia Meloni of the Brothers of Italy.

CBS News reports on the results of elections in Italy this weekend, bringing to power the closest that nation has had to a fascist government since Benito Mussolini made fascism a thing exactly one century ago:

Italians have voted in the country’s most right-wing government since World War II. Giorgia Meloni is the leader of the Brothers of Italy party, and after the weekend vote she’s set form a coalition government and become Italy’s first female prime minister…

Meloni, a 45-year-old firebrand politician, insists she’s no fascist, just a proud conservative and nationalist. She is comfortable, nevertheless, with some of the hallmarks of Italian fascism, including a motto she often utters from podiums: “Dio, patria, e famiglia!” Or in English, “God, fatherland, and family.”

Exactly 100 years ago this fall, dictator Benito Mussolini, as the leader of Italy’s National Fascist Party, staged his historic March on Rome. He eventually marched the country straight into two decades of dictatorship and, alongside Adolf Hitler, into World War II.

Although the Brothers of Italy’s rapid rise from the fringe of Italian politics to leadership has alarmed the international community, as ABC News reports, the people of Italy appear to be, at least for the moment, substantially less troubled–and for students of history, that could be the most chilling aspect of Giorgia Meloni’s rise to power:

In general, the party’s neo-fascist roots appear to be of more concern abroad than at home. Some historians explain that by noting a certain historical amnesia here and Italians’ general comfort living with the relics of fascism as evidence that Italy never really repudiated the Fascist Party and Mussolini in the same way Germany repudiated National Socialism and Hitler. [Pols emphasis]

While Germany went through a long and painful process reckoning with its past, Italians have in many ways simply turned a willful blindness to their own…

The restoration of a government that lives up to the tenets of fascism even if they don’t like the word, in the cradle of historical fascism, may be ominous to many outside observers. But for Colorado’s freshman GOP controversy magnet Rep. Lauren Boebert, it’s nothing less than a triumph of the will: 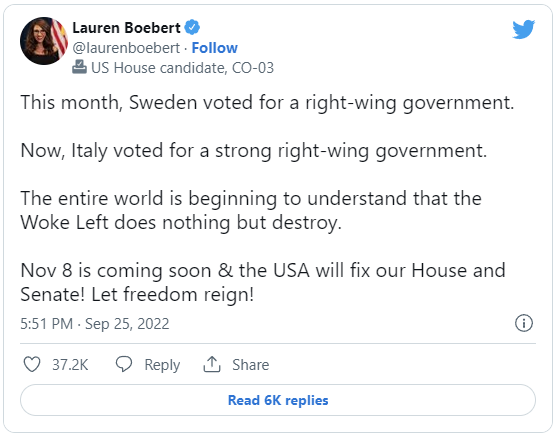 We grew up with the expression “let freedom ring,” but under the circumstances “reign” might be more appropriate? Especially in the event that Italy’s second flirtation with fascism fails to resemble anything you’d call free. It’s not a surprise, but it is another warning–for the voters of CD-3 to ignore at their peril.