UPDATE: Ernest Luning of the publication formerly known as the Colorado Statesman reports on the response from the various campaigns to today’s polling numbers.

Up first, the frat house that is the Joe O’Dea campaign strikes back with its familiar brand of inexplicable chest-pounding:

A spokesman for O’Dea’s campaign disputed the poll’s findings in a text message to Colorado Politics.

“If this is a 10 point race, Joe Biden’s inflation crisis was transitory and Michael Bennet is a professional fly fisherman,” said Kyle Kohli, O’Dea’s communications director.

Saying his candidate has “massive appeal to voters who are sick of both political parties,” Kohli added that the campaign feels as good about O’Dea’s chances as they did when he won the primary in late June despite massive spending by Democrats to boost his more conservative opponent.

Righto! O’Dea spokesperson Kyle Kohli should have erred more toward this response from the campaign for gubernatorial no-hopeful Heidi Ganahl:

Ganahl spokeswoman Lexi Swearingen said her candidate is “looking forward to surprising people again this November,” noting that the Republican won the CU regent’s race six years ago amid predictions she wouldn’t.

This statement is significantly less ridiculous than the one from Kohli, though it wrongly presupposes that more than a handful of Coloradans had any sort of opinion whatsoever on the 2016 CU Regent race. But at least Ganahl’s campaign is taking their lumps with a modicum of grace.

Finally, here’s what the O’Dea and Ganahl campaigns SHOULD have done:

Bennet’s and Polis’ campaigns didn’t respond to a request for comment.

The numbers speak for themselves. 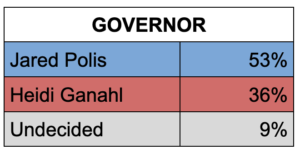 As The Hill newspaper reports:

Sen. Michael Bennet (D-Colo.) and Colorado Gov. Jared Polis (D) are on track to win their reelection bids in November, with each man holding a double-digit lead over his Republican challenger, according to a new Emerson College Polling/The Hill survey released Thursday.

Fox 31 is trying their best to make these numbers seem less terrible for Ganahl, but no amount of sugarcoating can change the taste for Republicans:

Of the respondents, 53% said they would vote for Polis if the election were held today, while 36% would vote for Ganahl. But a significant minority of voters said they are still undecided — 9% for this race.

Even if Ganahl picked up every last undecided voter in this poll, she’d still be trailing Polis by 8 points. 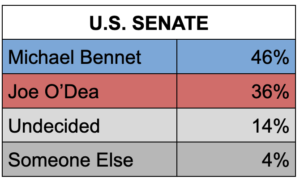 Meanwhile, in the race for U.S. Senate, incumbent Democrat Michael Bennet is polling 10 points ahead of Republican Joe O’Dea. The poll shows that 14% of Colorado voters remain undecided, while 4% plan to vote for “Someone Else.”

As The Hill notes, these numbers do not comport with recent claims from national Republicans:

Sen. Rick Scott (R-Fla.), the chair of the National Republican Senatorial Committee (NRSC), told reporters on Tuesday that O’Dea is “barely behind” Bennet in the polls and has a real chance of ousting Colorado’s senior senator this year.

If Scott and the NRSC really believed this, of course, then they would be spending at least some money in Colorado to support O’Dea. But they aren’t. 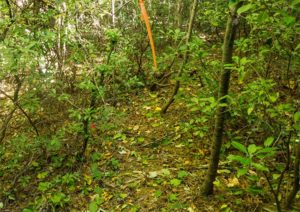 The Republican path to victory in Colorado is in here somewhere. Maybe.

These new numbers certainly track with other recent public polling in Colorado’s Senate race. Even conservative pollster McLaughlin and Associates had Bennet with an 8-point lead over O’Dea in its mid-August survey. There has been less available public polling in the race for Governor, largely because no serious political professional has been able to find any daylight for Ganahl’s bumbling campaign.

Interestingly, both Ganahl and O’Dea are stuck at about 36% support. This doesn’t suggest a ceiling for the Republican candidates, but there’s not a ton of room for potential growth based on top-ticket races in Colorado over the last decade. Bennet may not be polling at 50%, for example, but recent history suggests that he can win re-election handily regardless; in the last three election cycles, no top-ticket Republican candidate has finished with more than 44% of the total vote in Colorado.

Of course Democrats (and Republicans) still need to keep pushing hard through Election Day to turn out every possible voter, but we’re starting to get a pretty good picture of how things might look in November.