Hoping for Turnaround, O’Dea Gets More of a “Turn Away” 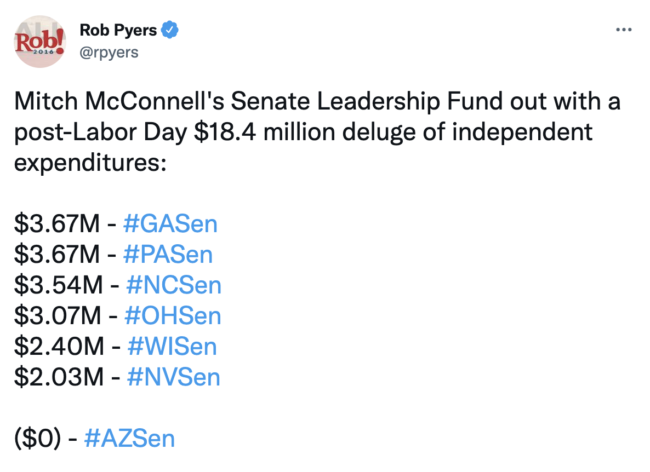 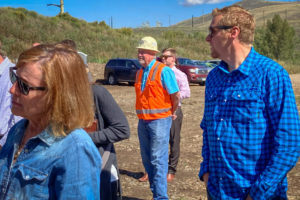 Joe O’Dea waits for someone to pay attention to him during event on the Western Slope last month.

Ballots will begin arriving in the mailboxes of Colorado voters in about six weeks. Little-known Republican Senate candidate Joe O’Dea is in desperate need of a cash infusion from national Republicans if he is going to get his name and face in front of enough voters in time to make a difference before voting begins.

From the look of things, that money may not be coming.

The Colorado Sun reported today on something we’ve been discussing for the last week in this space (HERE and HERE): All of the talk from national Republicans about how Colorado could have a competitive Senate race in 2022 hasn’t resulted in any significant spending thus far.

Just under $9 million worth of TV ads have aired or been booked in the Senate contest this year, according to a Colorado Sun analysis of contracts filed with the Federal Communications Commission through Wednesday.

That compares with the nearly $46 million worth of TV ads that had aired or were booked before Sept. 1 in Colorado’s 2020 Senate contest between Republican U.S. Sen. Cory Gardner and Democratic former Gov. John Hickenlooper.

O’Dea’s campaign has thus far been relying on its own meager fundraising for media buys, and sources tell us that his campaign is currently buying ad space on a week-to-week basis. It’s obviously more cost-effective to purchase TV ad time in advance, but only if you know that you’re going to have the money to pay for it. In recent weeks, O’Dea has been outspent by incumbent Democratic Sen. Michael Bennet by a 3-to-1 margin.

According to a new story from NBC News, national Republican groups are putting together sizable ad buys in a handful of states…none of which are in Colorado:

While the National Republican Senatorial Committee has enlisted former President Donald Trump to help reverse lagging fundraising, much — if not most — of the money will come from the Senate Leadership Fund to start. The group, aligned with Senate Minority Leader Mitch McConnell, had already been on-air in Pennsylvania, and this week will begin to deploy the rest of a $169.2 million advertising plan across key states…

…At the moment, McConnell’s Senate Leadership Fund seems the likelier bet for a bailout. Multiple sources who spoke with NBC News said they viewed that group, and not the National Republican Senatorial Committee, as the cavalry capable of financing the bulk of the fall push. The senatorial committee had just $23 million on hand at the end of July, according to its latest filing with the Federal Election commission, giving it far less capital than the Senate Leadership Fund.

The Senate Leadership Fund ad blitz that begins Tuesday includes $37.1 million in Georgia, $27.6 in North Carolina, $28 million in Ohio and $15 million in Nevada and Wisconsin. That’s atop an existing $34.1 million commitment in Pennsylvania. Overall, the group has reserved $169.2 million in ad spending for fall campaigns. [Pols emphasis]

O’Dea probably can’t expect much help from the National Republican Senatorial Committee (NRSC); under the leadership of Florida Republican Sen. Rick Scott, the NRSC has pissed away 95% of the money it had raised — much of that on questionable online small donor fundraising schemes. The small amount ($241,000) that the NRSC spent on ads for O’Dea in August appears to have come from an NRSC legal fund, which is probably not…legal.

NRSC is basically daring Democrats to file a complaint.

One person briefed on the NRSC's decision to use legal funds this way said it was, in part, because the NRSC can use those same legal funds to fend off any potential formal complaints or fines.https://t.co/Fx6BI5CwSq

As The Colorado Sun reports, whatever money the NRSC does have does not appear to be earmarked for O’Dea. And despite Senate Minority Leader Mitch McConnell’s claim in July that he would be “all-in” for O’Dea in the fall, the Senate Leadership Fund (SLF) remains frustratingly vague (for O’Dea, at least):

The NRSC spent $241,000 on cable TV in August with an ad linking Bennet to Democratic President Joe Biden. But NRSC and Senate Leadership Fund have yet to schedule TV time for the fall, which is a major indication the race isn’t a priority, as is the fact that national Democratic groups haven’t started spending in Colorado to shore up Bennet.

“It’s a race we’re keeping an eye on,” said Jack Pandol, a spokesman for the Senate Leadership Fund. “We continue to be impressed by the race Joe O’Dea is running in Colorado.” [Pols emphasis]

In other words, Joe: You’re probably screwed. Again, Colorado voters will be marking their ballots in about six weeks. The NRSC and SLF are waiting to board a plane that is already pulling away from the gate.

Meanwhile, in something of a last-ditch effort to generate interest in Colorado, local Republicans are still promoting a poll that may or may not exist that allegedly shows O’Dea within striking distance of Bennet. These results would be completely at-odds with all of the known public polling in the race thus far, which is probably why Republicans literally won’t show it to any reputable news outlets (as the Sun reports today, they “asked the state party for a copy but did not receive one.”) If the local GOP really has poll results filled with good news for O’Dea and they are refusing to show anyone…well, let’s just say we’d be in completely uncharted territory at that point.

We’ll update this post if we get word that any of this might be changing. If we’re not updating within the next week or so, it will be time to stop looking.