Cook Moves Colorado Senate Race, But Not Why You Think 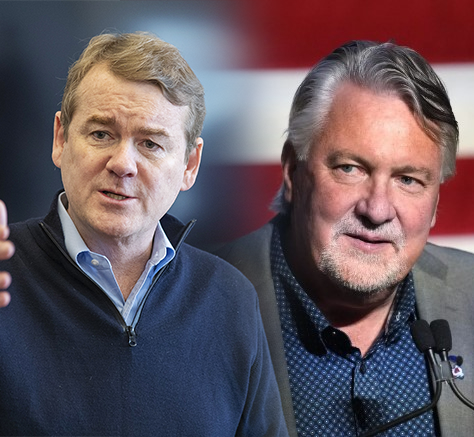 Yesterday, Cook Political Report updated their election forecast rankings in several U.S. Senate races, including Colorado’s where the rating for our race was downgraded from “Likely Democratic” to “Leans Democratic.” It’s a change that left some heads scratching after a poll at the beginning of the week by Republican-leaning McLaughlin and Associates showed incumbent Democratic Sen. Michael Bennet with an eight-point lead over Republican challenger “Rando” Joe O’Dea.

But as Ernest Luning of the Colorado Springs Gazette’s political blog explains, the change in Colorado’s assessed competitiveness by Cook may not be due to anything on the ground in Colorado at all–but rather a deteriorating situation for Republicans in other states narrowing the GOP’s path to a Senate majority, in ways that will obligate more attention to Colorado:

The move coincides with Cook downgrading to a toss-up the GOP’s chances of winning a majority this fall in the 50-50 Senate, [Pols emphasis] where Democrats hold the gavel owing to the tie-breaking vote wielded by Vice President Kamala Harris.

In part, Cook’s Jessica Taylor says, that’ because Republicans have nominated “weak, divisive candidates” in several of the GOP’s must-win states, including Mehmet Oz in Pennsylvania and Blake Masters in Arizona. Colorado’s rating change appears to be partially a byproduct of the GOP’s less-than-stellar standard bearers in other states once considered riper targets, leaving national Republicans strategists “hav(ing) to find other plausible races.”

Cook cites Senate Republican Leader Mitch McConnell’s remarks last month calling O’Dea “the perfect candidate” for Colorado and a declaration that national Republicans are going to get involved in the race. Democrats, meanwhile, “acknowledge this isn’t in the bag and is closer than many people think,” according to an unnamed Colorado GOP strategist quoted by Cook. The same strategist acknowledges that key constituencies could be difficult for the Republican to carry unless the election is primarily about the economy and not abortion or other social issues.

This is very important to understand, and kudos to Ernest Luning for looking past the headlines to see what’s really going on here. It’s not that Joe O’Dea has demonstrated any real strength in this race. The only thing O’Dea really has going for him at this point is not being Mehmet Oz, Herschel Walker, or Blake Masters. As Republican Senate campaigns in more winnable states sputter under weak candidates, Colorado moves up in importance for Republicans by default, not by choice.

The collapse of Oz in Pennsylvania makes Georgia look relatively good, as Herschel Walker is still hanging around, even if he’s trailing. There’s no getting around it: Walker is a disappointing candidate who is struggling to improve his communication skills on the trail…

[T]he narrative that Republicans are blowing their chances in what should be winnable races because they nominate deeply flawed, relatively unknown, far-too-Trumpy or extreme candidates has a lot of evidence to support those contentions. Blake Masters has yet to look all that strong against incumbent Democrat Mark Kelly in Arizona’s Senate race, which was expected to be one of the most competitive races of the cycle. The hopes that Joe O’Dea would give incumbent Democrat Michael Bennet a serious run for his money in Colorado have yet to bear fruit. [Pols emphasis]

In war as in politics, there’s a huge difference between being on the offensive to victory and becoming the fallback option as the tide of battle turns against you. As Republicans fumble more winnable Senate races in other states, they’re looking to O’Dea out of desperation more than hope. But the fundamentals still apply: O’Dea is still a candidate with zero political experience, struggling to distance himself from the locally toxic Republican brand, and reliant on his personal fortune and political consultants to manufacture his aura of competitiveness.

And yes, he’s not Ron Hanks. But that’s not going to be enough.