Can’t Make This Up: The “America First Candidate Carnival”

Thursday evening at the Oasis Christian Church in Pueblo West, a family-friendly event for Pee-ebla “patriots”–don’t accuse us of besmirching the word, it’s organized by the Pueblo County Patriots–who want their face patriotically painted and don’t want to hear from any softie gone-Denver Republicans in Name Only: 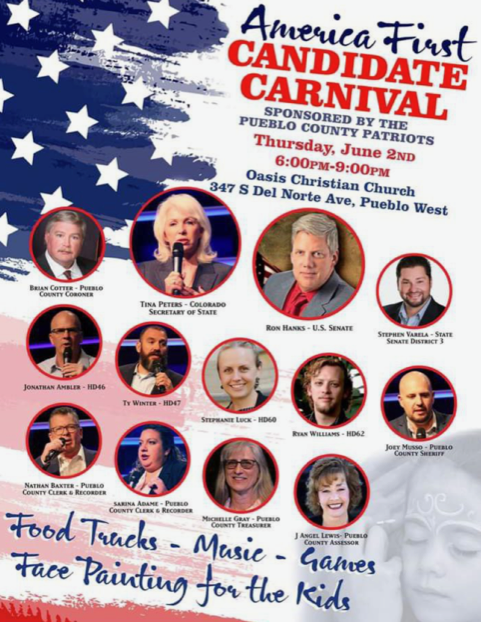 We don’t know what Brian Cotter, who is apparently the Pueblo Patriots’ favored candidate for Pueblo County Coroner, did to get himself on the top tier of candidates along with Tina Peters and Ron Hanks, but the possibilities are creeping us out. Also curious is Stephen Varela, running for Leroy Garcia’s old Senate seat, sharing top billing with Hanks and Peters. SD-3 is on the list of Senate seats Republicans would like to pick up in November, and Varela has been pitched by Republicans as a curveball in this politically volatile district.

Apparently he is, just not the way anyone was thinking.

For the headlining carnival barkers (sorry, it’s just too easy) Hanks and Peters, it’s another opportunity for them to present themselves as the natural favorites of the Republican base with no opposition from their primary opponents. Both of these candidates have made up for other deficiencies–Hanks’ financial and Peters’ criminal–by aggressively campaigning in person at every possible event where Republican primary voters are likely to congregate. Peters has the added advantage of having substantially outraised her primary opponent, while Hanks has zeroed in on his opponent’s weakness on banning abortion to wedge his low-budget campaign into contention. With ballots going out in just days, Hanks and Peters have all the momentum.

It’ll all be on display Thursday at the (we’re still chuckling) “America First Candidate Carvinal.”