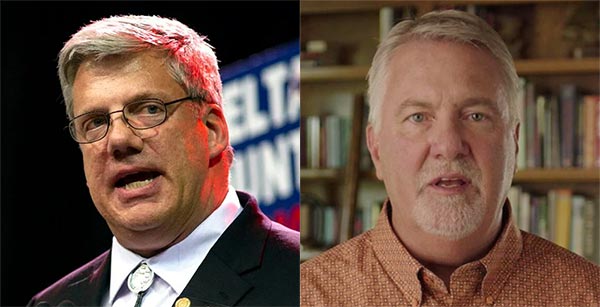 With just two weeks left before voters begin receiving their ballots, Colorado’s Republican U.S. Senate primary is heating up over the issue of abortion rights.

State Rep. Ron Hanks of Penrose, a far-right election conspiracist who secured the top ballot line on the June 28 primary with the highest vote share at the GOP state assembly last month, has attacked his opponent, Denver construction executive Joe O’Dea, as a “pro-abortion” candidate at odds with most Republican voters.

In an interview with conservative radio host Dan Caplis on Tuesday, O’Dea affirmed his opposition to the Supreme Court’s expected reversal of Roe v. Wade and said he’d support a limited effort to codify abortion rights nationwide through legislation in Congress.

O’Dea said he supported a wide range of limits on abortion rights and access, including prohibitions on abortions later in pregnancy, preserving the ban on public funding for abortions and parental notification requirements.

But his support for a bill establishing a nationwide right to abortion puts him at odds with most GOP voters, 68% of whom oppose such a policy, according to a recent CNN poll. Hanks, whose campaign kept a low profile following his assembly win and raised little money, has gone on the offensive in recent days, slamming O’Dea’s abortion-rights stance.

“Joe O’Dea is now not only running as a pro-abortion candidate in a Republican primary, he’s siding with the radical Democrat lobby set on taking away states’ rights on the issue,” Hanks wrote in a May 20 post on his website.

Neither Hanks nor O’Dea responded to a request for comment. Democrats and abortion-rights advocates, for their part, say that both GOP candidates, who are vying for the nomination to challenge incumbent Sen. Michael Bennet in November, are out of step with Colorado voters. O’Dea has criticized both the Reproductive Health Equity Act passed by Colorado Democratic lawmakers this year and the unsuccessful abortion-protections bill proposed by congressional Democrats in the wake of a leaked draft Supreme Court opinion earlier this month that indicated the court’s conservative majority is poised to overturn the 49-year-old Roe v. Wade decision guaranteeing abortion rights.

“Ron Hanks and Joe O’Dea are enemies of abortion rights – and their anti-choice views go against the majority of Coloradans and disqualifies them from serving in the U.S. Senate,” Colorado Democratic Party spokesperson Nico Delgado said in a statement.

‘Somebody I cannot vote for’

Hanks challenged O’Dea directly on the issue in a debate in Denver on Saturday, drawing cheers from the crowd at the Grizzly Rose concert hall as he called his opponent’s stance “the same as the unrepentant pro-abortion Nancy Pelosi.”

“I’m personally pro-life, but I also know that we need balance in America,” O’Dea replied. “And that’s where I’m at.”

Hanks — a first-term lawmaker who has repeatedly spread debunked conspiracy theories about the 2020 election and was present outside the U.S. Capitol during the Jan. 6 insurrection — was one of just four House GOP members to sponsor a 2022 bill “abolishing abortion in Colorado,” with no exceptions for rape, incest or life-threatening complications like ectopic pregnancies.

Colorado voters have soundly rejected a series of attempts by conservative activists to limit abortion rights at the state level over the last decade. The most recent, Proposition 115 in 2020, would have banned abortions after 22 weeks of pregnancy — roughly the same limit endorsed by O’Dea in his interview with Caplis this week — and suffered an 18-point defeat.

Abortion-rights advocates say that abortions later in pregnancy, which account for less than 1% of procedures, are highly personal and complicated decisions that often follow the diagnosis of a terminal genetic or developmental condition in the fetus. Though the phrase “late-term abortion” is favored by conservative politicians, medical professionals reject the term, which they say “has no medical definition” and is used misleadingly and inconsistently.

Under pressure from Caplis, O’Dea declined to say when he believes human life begins, and said he wasn’t open to reconsidering his position. Repeatedly pivoting to concerns about inflation and gas prices rather than what he called “social issues,” he argued that his stance represents the Republican Party’s best shot at unseating Bennet in a state that has trended towards Democrats in recent elections.

O’Dea and his backers — who include much of the state’s Republican establishment — hope that kind of strategic message will be persuasive to GOP primary voters next month. But it didn’t persuade Caplis, or multiple listeners who called into his show to express their disappointment with O’Dea after the interview Tuesday afternoon — including Hanks himself.

“I’m grateful for the chance to build this distinction here. It’s important for the voters of Colorado,” Hanks told Caplis.

“I’m sad today because Joe is choosing murder and death,” Caplis said later in his show. “It just makes me very sad, because somebody I had viewed as a very strong and credible GOP candidate is now somebody I cannot vote for.