Get More Smarter on Tuesday (March 29)

March isn’t really going out like a lamb or a lion. Let’s Get More Smarter. If you think we missed something important, please include the link in the comments below (here’s a good example). If you are more of an audio learner, check out The Get More Smarter Podcast. And don’t forget to find us on Facebook and Twitter.

► Russia says it will scale back attacks near the Ukrainian capital of Kyiv as peace talks continue. There is some hope that negotiations are bearing fruit that could lead to a potential ceasefire.

► NATO is increasing its forces in support of Ukraine as Russian forces continue to get bogged down in their invasion. From The New York Times:

NATO is doubling its battlegroups on the alliance’s eastern flank in response to Russia’s continuing war in Ukraine, the group’s secretary general said on Wednesday before a major summit in which President Biden will meet with European allies in Brussels in the coming days.

The secretary general, Jens Stoltenberg, also focused on what import Russia’s potential use of any chemical or biological weapons in Ukraine could hold for NATO, saying that such use would “fundamentally change the nature of the conflict.” And he upped the rhetoric on China’s role in bringing the conflict to an end, cautioning Beijing not to provide material support to Moscow.

Meanwhile, The Associated Press reports that Russian casualties from the war in Ukraine have surpassed 15,000.

► Things keeping looking worse for former President Trump as investigations continue into the insurrection on Jan. 6, 2021. From The Washington Post:

The seven-hour gap also stands in stark contrast to the extensive public reporting about phone conversations he had with allies during the attack, such as a call Trump made to Sen. Mike Lee (R-Utah) — seeking to talk to Sen. Tommy Tuberville (R-Ala.) — and a phone conversation he had with House Minority Leader Kevin McCarthy (R-Calif.).

The House panel is now investigating whether Trump communicated that day through backchannels, phones of aides or personal disposable phones, known as “burner phones,” according to two people with knowledge of the probe, who, like others interviewed for this report, spoke on the condition of anonymity to discuss sensitive information. The committee is also scrutinizing whether it received the full logs from that day.

One lawmaker on the panel said the committee is investigating a “possible coverup” of the official White House record from that day.

► Meanwhile, a bombshell federal court ruling against John Eastman, the former visiting professor at the University of Colorado who helped Trump try to plan his 2021 coup, seems to indicate that Trump likely committed a crime in his pre-insurrection dealings. This is also bad news for Republican gubernatorial candidate Heidi Ganahl, who was a big Eastman booster in her role as a CU Regent.

► As The Colorado Sun reports in its “Unaffiliated” newsletter, Trump’s big silly border wall is back as a talking point for Republican U.S. Senate candidates. Republican hopefuls Eli Bremer, Gino Campana, Deborah Flora, and Ron Hanks all agreed at a recent candidate forum that the United States should get back in the wall building business. 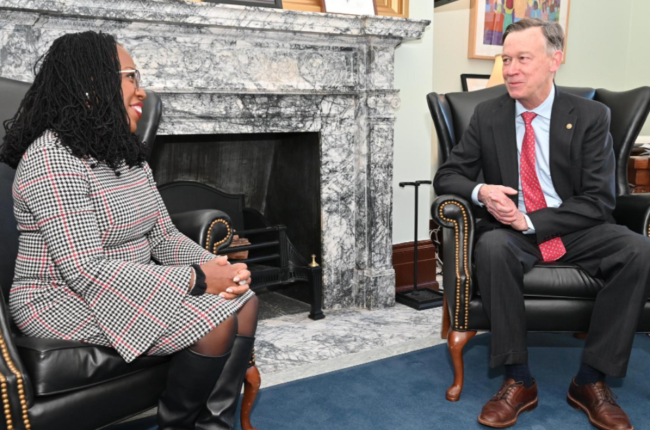 ► Colorado-based Ball Corporation is pulling its business out of Russia.

► Things are going to get really weird one week from today at the State Capitol. Bring your pillows.

► The Colorado Sun’s “Unaffiliated” newsletter breaks down the various property tax initiatives competing for space on the 2022 ballot.

► State Sen. Barbara Kirkmeyer has qualified via petition to make the ballot for the Republican primary in CO-08.

► Another effort is underway at the State Capitol to ban the use of cell phones while driving.

► The Colorado Times Recorder reports on a proposed ballot measure seeking to increase salaries for teachers.

► As Charles Ashby reports for The Grand Junction Daily Sentinel, embattled Mesa County Clerk and Recorder Tina Peters has something else to complain about:

Peters bemoaned having her concealed-carry handgun license revoked during the Mesa County Republican Party Assembly over the weekend.

In addressing the assembly, Peters pointed a finger at Mesa County Sheriff Todd Rowell for revoking her license, saying it was suspended, but saying nothing further as to why.

“I could go on about the night I spent in jail while my father was dying,” she said, according to a Colorado Newsline report. “I could go on and on about two lawsuits against me, but I won’t. What God has called you to do, he will call you through.”

Rowell’s office couldn’t confirm last week when asked by The Daily Sentinel if Peters’ concealed-carry license had been suspended because it is barred by law from revealing who has a concealed-carry permit.

State law mandates that concealed carry permits be suspended for anyone charged with a crime in Colorado. Peters faces 10 counts — 7 of which are felonies — because of her efforts to break into her own county’s election equipment.

► The Colorado Supreme Court struck down parts of Colorado’s cyberbullying law because of free speech concerns.

► Former President Trump claims he recently made a hole-in-one while golfing. The Internet is, shall we say, skeptical.

► We probably don’t need to tell you that this isn’t really true.

► This week on The Get More Smarter Podcast, hosts Jason Bane and Ian Silverii talk with Congressman Joe Neguse (D-Boulderish) about his public lands efforts, specifically a bill to create the Amache National Historic Site.