(Toxic is as toxic does — Promoted by Colorado Pols) 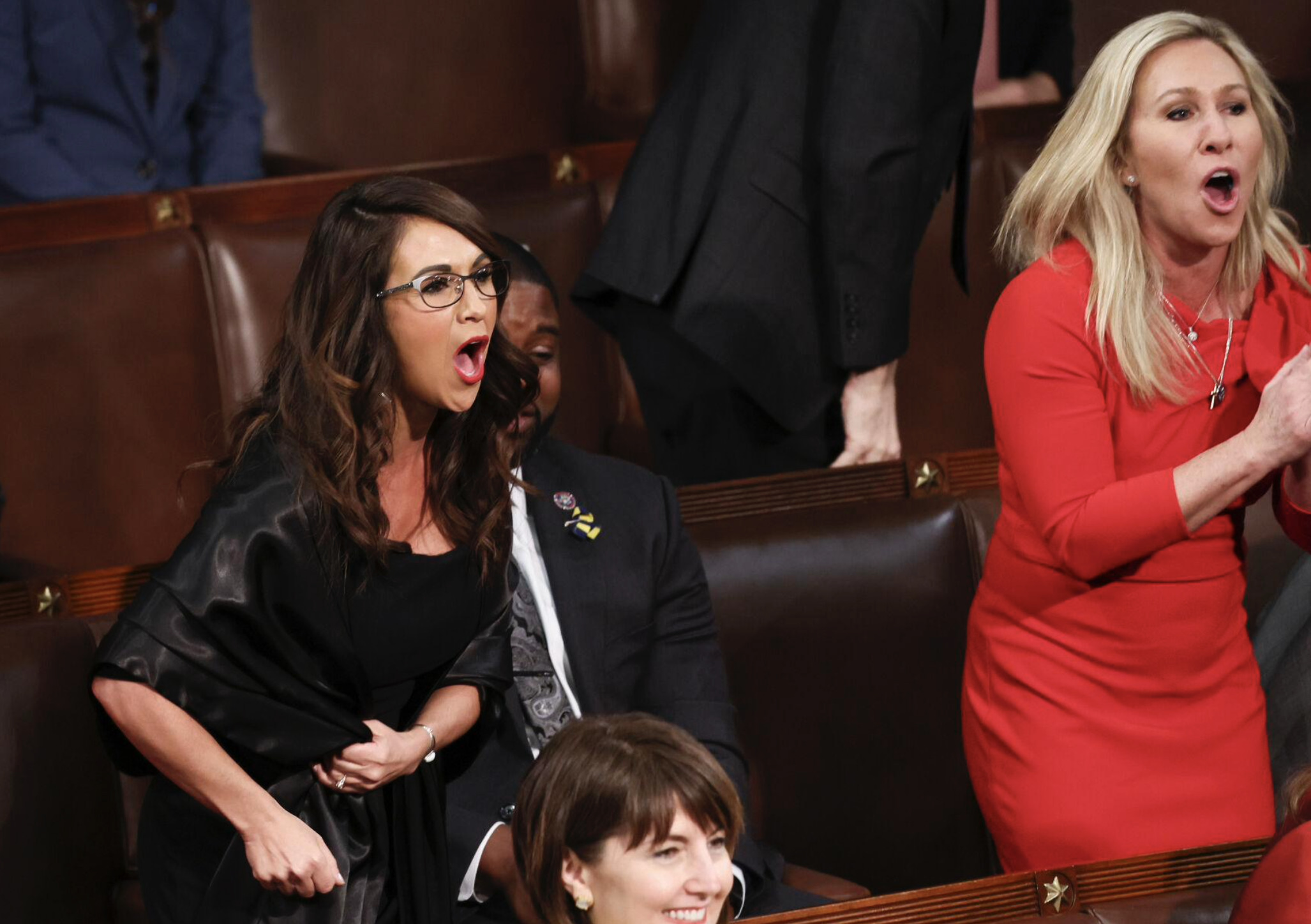 In her short career, U.S. Rep. Lauren Boebert (R-CO) has demonstrated a record of publicly attacking fellow Republicans, despite being praised by one of her congressional caucus colleagues for not being divisive in the party with her remarks.

Last December, Rep. Nancy Mace (R-SC) appeared on the Colorado-based Ross Kaminsky Show to discuss proposed bipartisan legislation, but the conversation turned to Boebert when Kaminsky asked (“slightly tongue in cheek”) if Mace was seeking Boebert’s support on her bill.

The day before, Boebert had made national headlines with her bigoted, Islamophobic statements about Rep. Ilhan Omar (D-MN), referring to Omar and her progressive colleagues as “the jihad squad.” Mace condemned Boebert’s remarks publicly and garnered derivative media attention for it.

Mace began her response to Kaminsky with, “Oh! Uhhh…” and a laugh, then she dodged the question by saying, “I’m not stopping anyone [from signing on to the bill,]”

“Here’s the thing,” Mace said, qualifying her initial ambivalence in responding. “I represent a swing district. And I’ve condemned comments on both sides — yeah, whether it’s bigotry or antisemitism. One of the things that Congresswoman Boebert did, is she recognized, and took responsibility for it, and apologized. And the thing that was missing last week with Marjorie Taylor Greene — because she’s a liar — is that. I condemned [Boebert’s] remarks as any normal human would. But then I praised her for coming forward and taking responsibility for it. …You know, Congressman Boebert, to my knowledge, hasn’t attacked other Republicans — I mean, the way this Marjorie character, the way that she does. I mean, it’s important that we come together, [that] we unify.

Kaminsky concurred with Mace’s assessment of the two Congressional bombasts, saying that while he supported Boebert’s congressional campaign, he believes Taylor Green to be “a moron” and “everything that’s wrong with the Republican Party.”

Mace and Boebert share an interesting biographical bullet point in their resumes. Like Boebert, Mace dropped out of high school and earned an equivalency diploma. But unlike Boebert, Mace subsequently enrolled and in 1999 became the first woman to graduate from the Citadel Corps of Cadets, which she says have contributed to her political success and offer inspiration to women in any field.

Early on in her unlikely rise to power, Boebert had proven her penchant for prioritizing the politics of personal attacks, and boosting her own public profile in social media and legacy outlets’ reporting — over the best interests of her party and the coalition of elected leaders that Republican political success relies on.

Even before Mace praised Boebert for her intracaucus civility in December, Boebert attacked Republicans generally as squishes or RINOs (Republicans in name only) when they spoke out or sought to hold former president Trump and his administration accountable, as evidenced here and here.

Boebert has also attacked prominent GOP officeholders by name in the media; however, her barbs have yet to be directed at Taylor Greene.

Appearing on Kaminsky’s show three days after Mace had praised her, Boebert denounced Republican Rep. Liz Cheney (R-WY) and Adam Kinzinger (R-IL) for their diverse ideas and opinions regarding the Jan. 6 attack on the national capitol and their participation in the House select committee to investigate and hold accountable all responsible parties.

BOEBERT: Now, we have a few bad apples. You know, I have been very vocal about removing Liz Cheney and Adam Kinzinger from the Republican Party, from the conference. I don’t think that they should be allowed in our closed-door meetings when they are serving on a sham [Jan. 6 ] committee put together by Nancy Pelosi only, a completely partisan committee to attack Republicans.

KAMINSKY: How does that play — and I’m sorry to interrupt Lauren, we only have about a minute left. How does–. I mean, you said, ‘It’s a big tent, we welcome all kinds of thinking, and I love that about the Republican Party.’ And then in the next breath you’re saying, “But we need to kick these two out.

BOEBERT:Yeah. Well, these two have shown that they are not willing to come to any sort of agreement with the Republican conference and move forward together to advance our country and solve these crises that we’re seeing. They completely sided with the Democrats on nearly every policy, you know, even with removing Paul Gosar. You know, people said, “Well, two Republicans voted to remove Paul Gosar from his committees.” I only saw Democrats vote to remove him.

KAMINSKY I mean, Liz Cheney is — I think she — I think Liz Cheney made something of a mistake. But she’s a very conservative person. She’s long been a principled conservative. She’ll probably lose her primary, anyway. And Kinzinger isn’t even running for reelection. But I mean, don’t you think there’s room for that in the GOP?

BOEBERT There’s definitely room for discussion, but when you go out and continuously bash people in your party and choose to take them down, this is why she was removed as conference chair. She was not speaking as the whole of the conference from her position and that’s why she was removed from Chair. You know, you can have your own vote, vote your conscience, vote your district. But when you use that position to tear down the entire party, that’s when we have a problem.

Boebert recently criticized Utah governor Spencer Cox (R-Utah) over his veto of an anti-transgender bill passed by the state legislature:

If he were “erring on the side of compassion & kindness” he would have thought of the GIRLS who’s sports will be taken over by MEN.

Former 2012 and 2016 presidential candidate and current senator Mitt Romney (R-UT) has also been called out by Boebert, as seen in this tweet from the 2020 campaign trail.

Willard Mitt Romney, you didn’t need to prove to us that you’re a RINO by marching with protestors in front of the White House today yet you did!

There is nothing you will not do to be the media’s darling, even though they hated you in 2012 and called you every name in the book!

A call to Rep. Nancy Mace’s office for comment on this story was not immediately returned. The Colorado Times Recorder will update this post with any response we receive.