UPDATE: Here’s an example of the kind of misinformation Rep. Shane Sandridge is denouncing his fellow Republicans for: 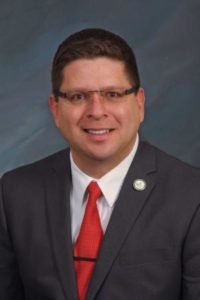 HB19-1263 reduced the penalty for simple possession, meaning possession not intended for distribution, of up to four grams of most narcotics to a misdemeanor offense instead of a felony.  The bill did not reduce the penalties for selling any illegal drug, but Republicans along with a few willing accomplices in the local media successfully planted a misleading narrative that “enough fentanyl to kill thousands of people” had been “decriminalized.” This is because in the case of the powerful synthetic opioid drug fentanyl proliferating in distribution recently, a tiny dose can be lethal–but in order the drug to “kill thousands” it would have to be distributed.

In an environment where Republicans are breathlessly pushing a false narrative in order to frighten voters away from Democrats in the upcoming elections, this bill’s Republican supporters and sponsors from 2019 have been suddenly very difficult to get on the record. With one commendable exception: Rep. Shane Sandridge of Colorado Springs, HB19-1263’s prime GOP House sponsor. Speaking to Colorado Public Radio earlier this week, Rep. Sandridge struck back against misinformation about the bill from his colleagues, and in doing so blew a huge hole in his party’s central argument going into the 2022 elections:

State Rep. Shane Sandridge, a Republican who sponsored the de-felonization bill, said that other members of his party were telling “lies” [Pols emphasis] when they said that a drug dealer could get away with a misdemeanor while possessing multiple grams of pure fentanyl. He pointed out that prosecutors can still pursue felony distribution charges against dealers.

“I don’t care what party you’re in. Just tell the truth,” he said. [Pols emphasis]

Every voter in Colorado needs to read this. And every Republican pushing the “Crimenado” needs to explain right now how their colleague Rep. Sandridge is wrong. None of this is meant to understate the seriousness of the global opioid crisis which predated this legislation, or any victim of crime. The question is whether one is out to actually solve problems, or merely to frighten people for political gain.

This Republican representative just called out his own party more powerfully than any Democrat could.