In like a lamb. Let’s Get More Smarter. If you think we missed something important, please include the link in the comments below (here’s a good example). If you are more of an audio learner, check out The Get More Smarter Podcast. And don’t forget to find us on Facebook and Twitter.

► As The New York Times reports, there are growing signs that massive economic sanctions against Russia are causing significant damage.

Here in Colorado, Gov. Jared Polis is leading a push to enact local sanctions on Russia as a result of that country’s invasion of Ukraine. Among the bigger moves, Colorado’s pension fund will pull millions in investments related to Russia. As Alex Burness reports for The Denver Post:

The board controlling the fund does not, as a matter of policy, divest from companies for moral reasons unless the state legislature or federal government directs it to do so. This divestment comes as a result of a federal order meant to sanction Russia by hurting its economy.

Colorado’s pension fund has about $8 million invested in five Russian-owned companies, a spokesman said. The majority of that — $7.2 million, as of Thursday — is invested in the Russian state-owned bank Sberbank, which is a target of federal sanctions. Neither state nor federal officials have yet commanded divestment from any of the other Russian companies tied to Colorado: OGK-2, Gazprom, Mosenergo, and Rosneft Oil.

U.S. Department of the Treasury officials have given until May 25 to comply with the order that mentions Sberbank.

Meanwhile, as The Colorado Sun reports, former Republican Gov. Bill Owens forgot that lesson about the stones and the glass houses. Owens has publicly criticized President Biden as the Russian invasion of Ukraine unfolds, but as the Sun notes:

Owens is the chairman of the supervisory board of the Credit Bank of Moscow, which has been barred by the Biden administration from issuing shares and debt in the U.S. after the Russian invasion of Ukraine…

Credit Bank of Moscow is among “13 of the most critical major Russian enterprises and entities” slapped by the White House with new debt and equity restrictions.

► As the war in Ukraine escalates and world powers become more involved, there is concern that some blowback could be felt in the United States. 9News reports on worries about cyber security threats, while CBS4 Denver considers the local economic implications.

► This headline from Colorado Public Radio is a pretty clear summation of election-related legislation in Colorado:

As Bente Birkeland reports for CPR:

The national partisan divide over voting policies is playing out in the halls of Colorado’s capitol this legislative session, with Republican lawmakers introducing some of the same policies their colleagues in other states have adopted, or are considering.

Colorado lawmakers in both parties have introduced close to a dozen bills so far this year dealing with how elections are conducted: everything from new candidate reporting requirements to restricting firearms near voting locations to measures some Republicans claim are needed to fight potential fraud.

While many of Colorado’s Republican leaders, including lawmakers, local officials and state party officers, have said they believe the 2020 presidential election was legitimate and want to move on to other issues, some of the GOP election bills this session have brought the issue to the forefront.

► Colorado caucuses kick off this week, with many taking place on Tuesday, March 1.

► Assistant House Minority Leader Tim Geitner (R-Falcon) announced that he will NOT seek re-election in 2022 for personal/family reasons. Geitner represents HD-20, a district that changed with re-districting but is still solidly Republican in terms of voter registration.

► “The Vote Without Fear Act,” legislation that would outlaw open carry of firearms at polling places, will likely pass out of the House of Representatives today.

► Petitions can begin circulating in the third or fourth (we can’t keep track) effort to recall Gov. Jared Polis and Secretary of State Jena Griswold. If you want more information, you can Google the website of the recall group; there is no chance that this group will collect more than 600,000 signatures before April 25, which is needed to actually trigger a recall election.

► Congressperson Lauren “Q*Bert” Boebert (R-ifle) spoke on Sunday at the right-wing CPAC conference. You can watch her speech here, but you already know what it sounds like: Lots of yelling and calling for Democrats to be impeached.

► As The New York Times reports, a convoy of truckers who planned to drive to Washington D.C. on account of freedom, or whatever, has fizzled:

A caravan of truckers that left California for Washington, D.C., on Friday to protest coronavirus mandates arrived in Las Vegas early Saturday with only five trucks in its ranks, the organizers said, prompting them to scrap the convoy and direct members to merge with other anti-mandate groups heading to the capital.

The caravan, named Freedom Convoy USA 2022, was one of several in the United States, modeled after the Canadian protests, that drove off this week toward Washington to demand, among other things, an end to the pandemic national emergency that began in March 2020, and an end to government rules requiring masks and vaccinations.

According to its Facebook page, the Freedom Convoy’s route started in Los Angeles on Friday and was scheduled to make stops in Salt Lake City, Denver and other major cities before arriving in Washington on March 1 in time for President Biden’s State of the Union address. But it appeared that the group couldn’t hold on to its supporters for long.

There are still a smattering of smaller groups trying to keep the rally dream alive. Colorado Republican gubernatorial candidate Heidi Ganahl showed up at a rally on Saturday to deliver her typically-meaningless rhetoric.

► CBS4 Denver has some local reaction to President Biden’s nomination of Ketanji Brown Jackson to the U.S. Supreme Court.

► Forecasters at the Cook Political Report seem to think Colorado’s U.S. Senate seat is just slightly more likely to end up in Republican hands in 2022. The Cook Political report shifted its analysis of Colorado from “Solid Democrat” to “Likely Democrat.”

► Colorado lawmakers are trying to protect our catalytic converters. As Colorado Newsline reports:

Catalytic converters, which make a vehicle’s exhaust fumes less polluting, contain precious metals, making them attractive to thieves. But as more and more of the car parts are stolen, and as global supply chains still feel the economic effects of the pandemic, the resulting supply and demand imbalance means it can take weeks to replace a catalytic converter. In the meantime, victims have to scramble to find an alternative means of transportation to work, school or child care…

…Catalytic converter theft “has increased 5,000% across the state of Colorado,” David Cardella, CEO of the Colorado Independent Automobile Dealers Association, testified during a Tuesday hearing of the House Judiciary Committee. “It has put dealers out of business, and it hurts them financially nearly every day.”

One of the measures that state lawmakers are hoping will remedy the problem is House Bill 22-1217, which requires people buying or selling catalytic converters to record information that might help law enforcement track down thieves. This would include names and contact information of buyers and sellers, the date of each transaction, and the vehicle identification number of the car that the catalytic converter was removed from or any ID number associated with the catalytic converter. Law enforcement would be able to review the transaction records from auto parts and metal recyclers upon request.

► Colorado Public Radio reports on a bipartisan measure in the legislature intended to protect public health officials from retaliation over policies.

► Juneteenth, the June 19 date that celebrates the end of slavery in the United States, will soon become an official state holiday (it is already a federal holiday).

► Former Attorney General William Barr is peddling a new book in which he says that former President Trump is “off the rails” and had no basis for challenging the 2020 election. Paul Waldman of The Washington Post marvels at Barr’s willingness to completely shrug off his integrity.

► Despite the occasional criticism, most Republicans are still scared shitless by Donald Trump. As Chris Cillizza explains for CNN, Arkansas Sen. Tom Cotton demonstrated this fear by twisting himself into knots rather than criticize Trump for praising Russia and President Vladimir Putin:

There’s a zero percent chance that Cotton, among the most hawkish of politicians when it comes to Russia and other foreign adversaries, agrees with Trump’s praise of Putin. None.

But he also knows that if he wants to run for president — either in 2024 or 2028 — he can’t risk upsetting the former President and his devoted supporters. So Cotton hedges — “I don’t speak on behalf of other politicians” — in hopes that he can thread the needle between not being seen as vocally opposed to Trump, while also clearly disagreeing with him…

…This is, of course, the opposite of leadership. For an example of what that looks like, consider what Utah Sen. Mitt Romney said of those, like Trump, who praise Putin amid the Ukraine invasion.

“It’s unthinkable to me, it’s almost treasonous and it just makes me ill to see some of these people do that,” Romney said on CNN’s “State of the Union” on Sunday.

► Masks are no longer required in Denver Public Schools. 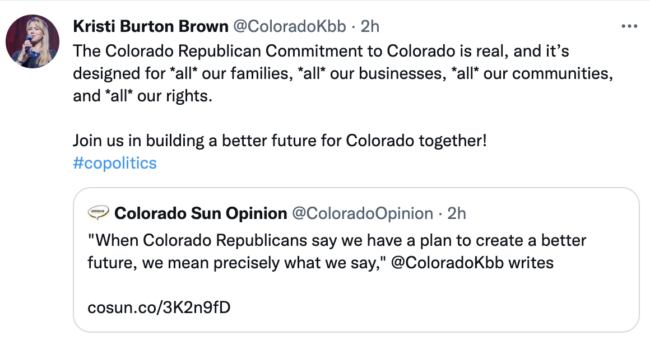 ► Mesa County Clerk and Recorder Tina Peters, who is also seeking the Republican nomination for Secretary of State, may have a small clone army that protects her at home.

► After speaking at the CPAC conference over the weekend, Donald Trump won the straw poll for the Republican Presidential nomination in 2024. Of course he did.

► At least nobody flushed the checks down the toilet, eh Sen. Paul Lundeen?

► Never forget that Colorado could be just one election away from significant changes to abortion rights.

► Stop it, Faye Griffin. Just…stop it.