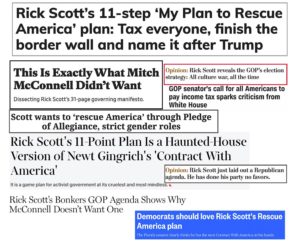 The reviews are in for Rick Scott’s GOP platform.

Back in August 2020, the Republican Party infamously announced that it had NO AGENDA heading into the November election. The national “party platform” was literally just, “Do whatever Donald Trump wants.”

Here in Colorado, the GOP platform was slightly less vapid, though no less destructive: It was all about continuing the red meat, right-wing lunacy that placated the Republican base. In 2021, Colorado Republicans added to that vision a strong dose of conspiracy nonsense. Heading into the 2022 elections, ambiguity is still king; one of the leading Republican candidates for U.S. Senate, Gino Campana, seems to be basing his entire campaign strategy around saying the phrase “American dream” as many times as possible.

You can see, then, why it was such a big problem on Tuesday when Florida Republican Sen. Rick Scott — the Chairman of the National Republican Senatorial Committee (NRSC) — decided to release an 11-step policy plan for the GOP that is downright bonkers.

Senate Minority Leader Mitch McConnell (R-Ky.) might be ruthless, cynical and power-hungry, but he is not dumb. There is a reason he declared late last year that the GOP would not put out an agenda for the midterms. When most voters learn what the party stands for (e.g., curtailing education on race, rolling back environmental laws, criminalizing abortion), they don’t like it…[Pols emphasis]

…Let’s start with what is not in there: any proposal to bring down inflation (which Republicans have been hollering about for months); to increase wages or reduce income inequality; to prepare workers for the 21st-century economy; to provide relief from tariffs (which are essentially taxes); and to increase school performance on basic subjects.

What it does include is embarrassing. Start with this: “We will secure our border, finish building the wall, and name it after President Donald Trump.” Republicans had their chance to do this when the defeated former president was still in office and failed. Moreover, such a project would be so expensive that it has lost support in deep-red Texas. It’s also irrelevant to real border protection — so much so that it has become a punchline.

Taken as a whole, the agenda reveals that the GOP is not a political party with ideas to improve the lives of Americans. It’s a frightful expression of White grievance and contempt for the intelligence of voters. And it confirms what we have long suspected: Republicans don’t lack an agenda; they’re just shy about revealing how unpopular it is. [Pols emphasis]

Critics jumped on Scott’s policy proposal, which includes a huge tax increase for all Americans. Scott’s plan is also heavy on affirming strict gender roles and requiring more people to recite “The Pledge of Allegiance,” but it’s the tax increases that are freaking out other Republicans. Via a separate Washington Post story: “It’s dramatically off-message for where Republicans are going on taxes — they shouldn’t be talking about raising taxes on anybody,” said Brian Riedl, a former aide to Sen. Rob Portman (R-Ohio) and a senior fellow at the Manhattan Institute, a center-right think tank.

As POLITICO reports, the criticism was widespread from other Republicans:

Privately, officials from some top Republican Senate campaigns mocked the plan, questioning why the Florida Republican senator released it in the first place — and why the GOP would ever suggest raising taxes at all during a midterm year featuring record-high inflation and unpopular Democratic control.

Less than a day later, Scott was already backpedaling. This headline from Business Insider tells the story well:

There is a connection here to the story in Colorado of a new conservative school board in Douglas County infuriating teachers, parents, and students with its draconian attacks. Republicans don’t like to talk openly about their ideas because most people don’t like them.

Scott’s policy blueprint should serve as a warning to all 2022 voters. Republicans are saying the quiet part out loud (again) and it should scare the hell out of Americans.