The Story of the RNC: Everybody Who ISN’T There

UPDATE: On the subject of things that don’t exist at the RNC 2020, you can now include “a party platform.” The Republican Party stands for Trump…and that’s about it.

Via the Republican National Committee

Tim Alberta of POLITICO has more on how the Republican Party is no longer about anything:

I decided to call Frank Luntz. Perhaps no person alive has spent more time polling Republican voters and counseling Republican politicians than Luntz, the 58-year-old focus group guru. His research on policy and messaging has informed a generation of GOP lawmakers. His ability to translate between D.C. and the provinces—connecting the concerns of everyday people to their representatives in power—has been unsurpassed. If anyone had an answer, it would be Luntz.

“You know, I don’t have a history of dodging questions. But I don’t know how to answer that. There is no consistent philosophy,” Luntz responded. “You can’t say it’s about making America great again at a time of Covid and economic distress and social unrest. It’s just not credible.”

Luntz thought for a moment. “I think it’s about promoting—” he stopped suddenly. “But I can’t, I don’t—” he took a pause. “That’s the best I can do.”

When I pressed, Luntz sounded as exasperated as the student whose question I was relaying. “Look, I’m the one guy who’s going to give you a straight answer. I don’t give a shit—I had a stroke in January, so there’s nothing anyone can do to me to make my life suck,” he said. “I’ve tried to give you an answer and I can’t do it. You can ask it any different way. But I don’t know the answer. For the first time in my life, I don’t know the answer.” [Pols emphasis]

The Republican National Convention officially got underway today with a rousing display of fist-shaking anger. This message from a Louisiana delegate should give you a good idea of the general tone for the week:

the RNC is already completely off the rails pic.twitter.com/Ykzqho4nLv

In case the video doesn’t work for you, the gentleman from Louisiana says, “Joe Biden is hiding in the dark, waiting to take the lives of our unborn babies.”

Colorado was represented early by Congressman Ken Buck (R-Greeley), who moonlights as the State Republican Party Chairman (or vice-versa). Buck had some very nice things to say about an imaginary White House:

Rep. Ken Buck, chair of the Colorado GOP, has announced the state’s 37 votes at the RNC are for Trump and Pence.

“They protected us from a worldwide pandemic,” the congressman said of a virus that has killed 175,000 Americans. #copolitics pic.twitter.com/MVpwaXpBdf

Buck’s revisionist history might be the only words you hear from notable Colorado Republicans. The RNC lineup of speakers does include some odd choices, such as the St. Louis, MO couple — Mark and Patricia McCloskey — who got in trouble in June for waving guns at Black Lives Matter protestors, but not a lot of other recognizable names from the GOP’s recent past. 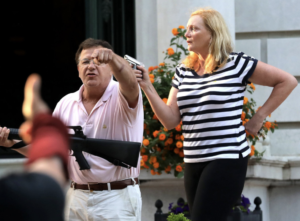 As Amber Phillips writes for The Washington Post, perhaps the most notable part of the RNC schedule is about who is NOT participating:

Not speaking for the second time at a convention nominating Trump is the only living past Republican president, George W. Bush — a break from tradition. (All three past Democratic presidents offered remarks at that party’s convention last week.)

We also won’t see a ton of Republican senators and House lawmakers who are running for reelection in potentially competitive races. Republican senators running for reelection from swing states for both the White House and the Senate — such as Colorado, Arizona, North Carolina, Georgia and Maine — won’t be making an appearance to speak on behalf of Trump.

That means Colorado Sen. Cory Gardner (R-Yuma) will not be making an official appearance. Gardner is tight with Trump, but that’s not really a winning message these days. As Phillips continues:

…many of these lawmakers are facing a difficult political reality in which Trump’s popularity is sinking in their states, largely because of concerns about how the president and his administration have failed to get the novel coronavirus pandemic under control. Voters also give the president poor marks on his handling of racial relations, which is unhelpful to senators representing increasingly diverse suburbs, especially in Southern states.

The conclusion is not to speak prominently at the president’s convention, which would almost certainly make it to their Democratic challengers’ TV ads. The one exception to this is Sen. Joni Ernst (R) in Iowa, who is in Republican leadership and facing a tough reelection but has apparently calculated that speaking will help her.

Normally these senators could use campaigning as an excuse for not being able to make it to the convention. But since it’s a convention where video feeds will be the norm, that excuse doesn’t work.

The rest of the lineup of speakers for the 2020 RNC is heavy on people named “Trump” and light on pretty much everyone else. Donald Trump, Jr. and his girlfriend, Kimberly Guilfoyle, headline the speaking lineup for Monday; First Lady Melania Trump will speak on Tuesday, as will Trump offspring Eric Trump and Tiffany Trump; on Wednesday we’ll hear from Lara Trump, Eric Trump’s wife; and on Thursday First Daughter Ivanka Trump will introduce The Big Orange Guy himself.

Thursday won’t be the first appearance for President Trump, however; he’s literally going to speak every day of the convention, which is fairly unusual for a Presidential candidate in general. Of course, it’s also unusual — and possibly illegal — for a President to accept his party’s nomination from the grounds of the White House.

We’ll keep you updated if any Colorado politicos make noise at the RNC this week, but it appears that the plan for most is to stay as far away from Trump as possible.