Happy Twosday! Let’s Get More Smarter. If you think we missed something important, please include the link in the comments below (here’s a good example). If you are more of an audio learner, check out The Get More Smarter Podcast. And don’t forget to find us on Facebook and Twitter.

► The New York Times is providing regular updates on the escalating tensions in Ukraine. It appears that a full invasion by Russia is imminent; on Tuesday, Russia’s parliament approved the use of military force.

The Washington Post reports that NATO is expecting a full-scale Russian attack on Ukraine:

“Moscow has moved from covert attempts to destabilize Ukraine to overt military action,” NATO Secretary General Jens Stoltenberg told reporters in Brussels following an emergency meeting of the Ukraine-NATO Commission.

Stoltenberg said Russia has 150,000 troops massed around Ukraine and noted that they are increasingly in combat formations.

“They are out of their camps, in the field and ready to strike,” he said.

The New York Times has a separate story on what a Russian invasion of Ukraine would likely mean for the world economy. The Associated Press has a good primer on what you need to know about the pending war.

► Colorado Republicans running for various high-profile offices in Colorado got together in Ft. Collins over the weekend. As Sarah Wilson reports for Colorado Newsline:

As Republican supporters gathered on Sunday night to hear from conservative candidates for governor, U.S. Senate and local races, they heard a nearly universal message against pandemic restrictions, critical race theory in schools and the current Democratic leadership.

“Republicans are finally aligned on our messaging. As you hear all of us speak, you’re going to hear a lot of the same things. I don’t think there’s a lot of argument about what we need to do once we win,” gubernatorial candidate Heidi Ganahl said…

Neuschwanger, who thinks that Gov. Jared Polis is only pretending to be gay, now says that Polis should be in jail for some reason.

► Republican gubernatorial candidate Heidi Ganahl wants to end ALL vaccine mandates at the University of Colorado…including vaccines for measles and mumps. She made this clear just a few days after announcing that she was opposed to legislation that would prohibit people from openly carrying firearms at polling places. 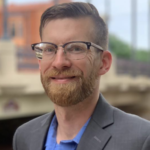 ► Democrat Nick Hinrichsen was chosen by a Democratic vacancy committee to replace Senate President Leroy Garcia, who resigned recently in order to take a new job at the Pentagon. From Denver7:

Hinrichsen will represent Senate District 3 through the end of this year’s session, and is running for election to the Senate seat in November as well. He will be sworn in this week after Garcia’s departure.

Hinrichsen, an Army veteran, received the most votes in both rounds of voting in Saturday’s special election in Pueblo and beat out Jason Muñoz for the seat.

He is the husband of former state Rep. Bri Buentello, D-Pueblo, who was defeated by Republican Rep. Stephanie Luck in last year’s election.

► As 9News reports, here’s yet another reminder that crime increases are not partisan matters. The City of Aurora is run by Republicans, led by Mayor Mike Coffman:

Aurora is grappling with the twin threats of gangs, which have evolved from how they looked a few decades ago, and youth violence — specifically shootings, police and experts say. The two problems are related, complicated but different.

Mark Hildebrand, metro division chief for the Aurora Police Department, said as many as 5,000-6,000 people considered by police to be gang members may call Aurora home, but quantifying the gang problem is its own challenge. He said police are struggling to keep up with a proliferation of “hybrid” youth groups that are difficult to track and classify.

► Democratic Senators Michael Bennet and John Hickenlooper are opposing a proposal to export water from the San Luis Valley into Douglas County. The opposition is in part because of Megadrought.

► Speaking of Hickenlooper, he is joining with Utah Sen. Mitt Romney to fight for the fish. This story would be a lot more fun if Hick and Romney were fighting WITH fish, but you can still imagine this scenario for fun.

► Lawmakers visited the site of Camp Amache in Granada, Colo. on the anniversary of the site’s creation.

► North Carolina Republican Rep. Madison Cawthorn appears to be legitimately concerned that his name might be removed from the 2022 ballot on account of his support for the Jan. 6 insurrection.

► Congressman Doug Lamborn (R-Colorado Springs) is once again petitioning his way onto the June Primary ballot.

► The Colorado Sun reports on a proposed solution to deal with a mounting mental health crisis among young people in Colorado.

► Colorado lawmakers are again looking at ways to permanently rid ourselves of Daylight Saving Time.

► Some Republicans are escalating efforts to rid themselves of House Minority Leader Hugh McKean:

I am a firm believer in #electionintegrity,but my opponent apparently does not.

Today I learned Rep. McKean doesn’t live at the address listed on his voter registration, and what’s more? His physical address on his candidate affidavit form is just a @UPS P.O. Box.#copolitics pic.twitter.com/aaVR7t7CHG

► Adams County continues its feud with County Treasurer Lisa Culpepper, who doesn’t appear to be paying much attention to her actual job.

It is totally Vice President Kamala Harris’s fault that Russia is about to invade Ukraine.

► The battle over gay wedding cakes has now evolved to a fight about gay wedding websites.

► At least this person is not running for Congress in Colorado. From The New York Times:

Democratic candidate for Congress in Oklahoma apologized in a television interview on Friday after parents complained that she drank and verbally abused children attending a sleepover at a friend’s home this month.

The House candidate, Abby Broyles, a former television investigative reporter who ran unsuccessfully for the U.S. Senate in 2020, said that she had no memory of what happened because she had mixed alcohol and a sleep medicine. About eight girls between the ages of 12 and 13 attended the Feb. 11 sleepover, where they watched the movie “Titanic,” according to NonDoc Media, a journalism nonprofit in Oklahoma…

…Citing information from some parents and children who attended the party, NonDoc Media reported that Ms. Broyles had sworn at one girl, while also mentioning that she was Hispanic, and had referred to another girl’s acne, among other abusive remarks. They said that she had vomited into one of the girls’ shoes, in addition to the laundry hamper. [Pols emphasis]

► That guy from Arvada running for Congress has been caught by police and is now sitting in jail as he awaits movement on a series of criminal accusations.

► Jefferson County Republicans are rolling out a retread ticket in 2022.