Republicans Finally Get a Candidate for Attorney General 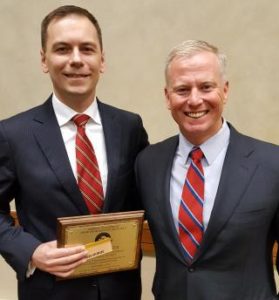 John Kellner (left) poses with George Brauchler, his predecessor in both the 18th Judicial District and the race for AG.

We put “announced” in quotations because, well, this was a strange way to kick off a campaign: Kellner made his candidacy official in the last paragraph of an Op-Ed published at 1:00 am behind the paywall of the publication formerly known as the Colorado Statesman.

This is about as effective as Kellner standing in his front lawn in the middle of the night yelling out, “I’m running for Attorney General!” But, hey, at least Republicans have someone to run for the top law enforcement position in Colorado.

If you’re not familiar with Kellner, you shouldn’t feel lonely. Kellner was first elected in 2020 by a very narrow margin. His opponent in that race, Democrat Amy Padden, noted that Kellner isn’t even halfway through his first term in office:

Wow. Barely a year after being elected DA (by just 1425 votes), John Kellner is back to campaigning for a different office. Colorado needs an AG like @PhilForColorado who they can trust and who is serious about serving the people of Colorado.#copolitics https://t.co/HPHJtg8nrL

As we noted in December, Kellner had been going back and forth on whether or not to run for the Republican nomination for Attorney General after multiple potential GOP candidates — including Scott Gessler, Mark Waller, and George Brauchler — had repeatedly refused entreaties to enter the race themselves. It’s understandable that a Republican would be reluctant to challenge Weiser, who has already raised a record-breaking $2.7 million for his re-election campaign and has been a vocal leader on a number of important issues. It doesn’t help that the rest of the GOP ticket is a disaster, starting at the top with Heidi Ganahl’s silly campaign for governor.

In 2018, Democrats swept the four major statewide constitutional offices in Colorado for the first time in modern history. In 2022, Republicans will counter with Ganahl for Governor; a guy with one year in public office under his belt for AG; a State Treasurer candidate who has lost four of his last five races (Lang Sias); and a challenger for Secretary of State (Pam Anderson) who is petitioning her way onto the Primary ballot because her belief that the 2020 Presidential election was not fraudulent doesn’t sit well with the Trumpy Republican base in Colorado.