Deadly Insurrection: It’s All One Big Joke To Jenna Ellis 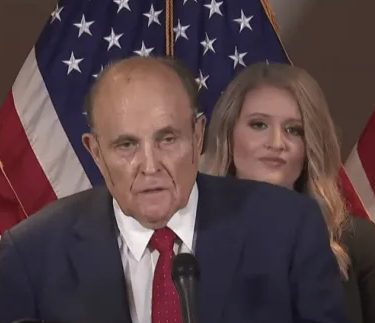 As Colorado Newsline’s Julia Fennell reported yesterday, former Colorado Christian University “constitutional law professor” Jenna Ellis, who gained nationwide fame as one of the principal faces of ex-President Donald Trump’s legal team challenging the results in dozens of failed lawsuits across the country, has been subpoenaed by the Select Committee investigating the January 6th, 2021 insurrection at the U.S. Capitol along with her boss Rudy Giuliani, crackpot attorney of record Sidney Powell, and Boris Epshteyn:

Ellis, 37, is accused of promoting claims that the 2020 election was stolen and participating in attempts to disrupt or delay the certification of the election results based on her allegations, according to a redacted letter sent to Ellis on Tuesday by the chairman of the committee, Rep. Bennie Thompson, a Democrat from Mississippi. The letter alleges that between mid-November 2020 and Jan. 6, 2021, Ellis sought to convince state legislators to take steps to overturn the 2020 presidential election results.

“The four individuals we’ve subpoenaed today advanced unsupported theories about election fraud, pushed efforts to overturn the election results, or were in direct contact with the former President about attempts to stop the counting of electoral votes,” Thompson said in a statement Tuesday, referring to Ellis, Giuliani, Powell and Epshteyn. “We expect these individuals to join the nearly 400 witnesses who have spoken with the Select Committee as the committee works to get answers for the American people about the violent attack on our democracy.”

Ellis is also accused of preparing and circulating two memos claiming to analyze the constitutional authority for the vice president to reject or delay counting electoral votes from states that had submitted alternate slates of electors, according to Tuesday’s statement.

Responding with the seriousness befitting the weighty subject of an insurrection at the U.S. Capitol that left five people dead and faith in American democracy seriously compromised, Ellis responded to her subpoena via Twitter:

The committee is just mad they can’t date me.

Well actually, the Select Committee does want a “date” of sorts. Under oath.

Of course, if you had responded to Jenna Ellis’ claims that the election was stolen from Donald Trump with the same flippancy (which admittedly we did), Ellis would have castigated you like she did the whole media establishment after taking over for Giuliani in the infamous dripping hair-dye press conference at Republican National Committee headquarters on November 19, 2021:

Jenna Ellis takes the mic and starts preemptively castigating the media for calling this press event too long and devoid of evidence pic.twitter.com/yUHrnpBnYI

In retrospect, the record has clearly established that press conference was 1. too long and 2. devoid of evidence.

But again, let’s return to the urgency and certainty with which this same Jenna Ellis worked to overturn the results of the 2020 presidential election, which directly provoked the violence at the U.S. Capitol on January 6th. Ellis has escaped the professional sanctions that her boss Rudy Giuliani has been hit with, which has been attributed at least in part to lax oversight of attorney ethics in Colorado compared to other states. But outside the conservative info-bubble Ellis migrated to at Newsmax a few months after January 6th, her reputation is as tarnished as Giuliani and fellow coup plotter John Eastman–both of whom have seen their job prospects dwindle since Trump left office.

If Ellis actually believes anything she said before January 6th, as we said about conspiracy theorist Joe Oltmann and the Dominion Voting Systems defamation trial, the Select Committee is a golden opportunity to make her case. If Ellis’ response to this inquiry into violence she had a direct hand in inciting is to crack wise and evade the hard questions, first and foremost Ellis is undercutting herself and everyone she helped convince of the “Big Lie” that the 2020 election was stolen.

The other possibility is that Ellis knows the truth and doesn’t care. Like Eastman, Ellis may well give two completely different answers about the legitimacy of Trump’s coup attempt depending on her audience.

There’s only one way to deal with such people, and that’s under penalty of perjury.