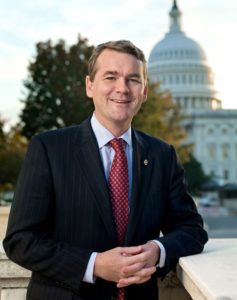 A side narrative to the last fifteen years of history in Colorado politics, alongside the general trend of Democrats with the help of demographic evolution ascending to political dominance, has been a current of dissent among harder-left Democrats that the “Colorado Model” did not meet their ideological standards. A pro-life Democratic Gov. Bill Ritter elected in 2006 was succeeded in 2010 by a fossil-fuel friendly Gov. John Hickenlooper, and in the early years of Democratic control the party’s agenda was focused more on practical matters like funding health and education than hot-button social issues. At the same time, Colorado Republicans were totally focused on a repellent wedge-issue agenda that made casting them in an unfavorable light easy.

Another product of this early “Colorado Model” political emphasis on the practical over ideological stridency was Sen. Michael Bennet. Appointed by Gov. Ritter in 2009 to succeed Interior Secretary Ken Salazar, Bennet’s relatively thin resume as Denver Public Schools superintendent and chief of staff for then-Denver Mayor Hickenlooper led to the first signs of grassroots pushback against Colorado’s relatively new Democratic leadership. The “pushback” didn’t last long, of course. Bennet easily dispatched a primary challenger in 2010 who ran a bitter campaign from Bennet’s left, and then went on to narrowly hold the seat against the tide of the 2010 GOP wave election.

And then something happened that Bennet’s liberal critics did not anticipate: Bennet actually became one of the more effective progressive voices in the U.S. Senate. In 2013, Sen. Bennet was part of the “Gang of Eight” coalition that successfully passed comprehensive immigration reform legislation out of the U.S. Senate–and then of course watched as the bill died in the GOP-controlled U.S. House determined to not allow President Barack Obama any victories. Faced with enormous pressure to support U.S. Supreme Court nominee Neil Gorsuch simply on account of geography, Bennet cast a brave and defining “no” vote. Today, Sen. Bennet is an articulate critic of the Senate’s dysfunction, and supports reforming the filibuster in order to clear the body’s self-imposed legislative logjam.

In 2019, Sen. Michael Bennet launched a presidential campaign that failed to ignite. On the campaign trail for President, however, Bennet called for among other things a dramatic expansion of the Child Tax Credit. Bennet’s vision was realized just this year by the passage of the American Rescue Plan, which started in July sending direct payments to 88% of American families with children. If the Child Tax Credit expansion can be made permanent, and as readers know that’s beyond Bennet’s control, it is projected to directly reduce child poverty by as much as 45%.

In 2010, it’s unlikely that Bennet’s critics on the left could have predicted that he would one day help bring about the greatest blow struck against child poverty since the Great Society. But it’s these accomplishments that have effectively taken the wind out of any Democratic primary challenge to Bennet in 2022. On the GOP side, the only opponent to Bennet with any legislative experience is freshman Rep. Ron Hanks, who is literally running on a platform of blowing up voting machines.

Bennet may not be the most charismatic Democrat in the caucus, but he’s earned the trust of voters that should see him through 2022 without too much drama–and from there, as long as he wants to serve.