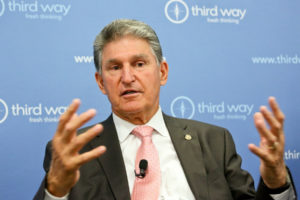 As Pat Poblete of the Colorado Springs Gazette’s political blog reports–while Colorado’s junior Sen. John Hickenlooper reckons with obstinate Democratic Sen. Joe Manchin of West Virginia’s deal-killing opposition to the carbon tax Hickenlooper has championed since his 2019 presidential run, Colorado’s other U.S. Senator Michael Bennet is confronted with a threat to the size and scope of his overwhelmingly popular Child Tax Credit from the same Sen. Manchin:

The number of Colorado parents eligible to receive the federal Child Tax Credit could be cut by nearly 70% if congressional Democrats and the Biden administration cave to the demands of one of their Democratic colleagues, according to a new report.

The vast federal program – which sends monthly payments to parents of children 17 years old and younger – has been a top policy priority of U.S. Sen. Michael Bennet since the middle of the last decade and was signed into law by President Joe Biden in March as part of a pandemic response package…

Researchers at the self-proclaimed “moderate” Niskanen Center, a Washington, D.C.-based think tank, on Tuesday released estimates based off of Axios’ report showing if Manchin got his way, some 37.4 million children across the country would lose out on federal aid.

Colorado would be particularly hard hit based on the projections put together by the Niskanen Center’s Robert Orr and Samuel Hammond. Based on the duo’s projections, roughly 320,000 Colorado kids would be eligible for the credit under Manchin’s proposal, down 67.9% from the roughly 1.1 million currently eligible children.

Sen. Bennet’s goal is to see the Child Tax Credit in its current form extended for a further five years–enough time for the credit to make measurable progress toward the goal of cutting child poverty in half throughout the United States. But because of the perfectly divided 50/50 U.S. Senate, Sen. Manchin now wields a degree of influence over the process that has galled and outraged Democrats across the nation. Manchin, the only Democratic representative left representing a state whose failed economy has embittered a white working-class population, seems to be taking pleasure in his dream-crushing role as he demands a smaller final package for the politically self-serving sake of being smaller.

With the signature priorities of both of Colorado’s U.S. Senators now at Joe Manchin’s mercy, the one thing we say for certain is that both Hickenlooper and Bennet are as frustrated as everyone else over the present state of affairs. What’s happening right now is not why either of them were elected to the U.S. Senate, and it’s not their fault. We can only hope that when the dust settles on a final product, some of the good stuff Colorado’s U.S. Senators have fought for is still in there.

In the long run, the only cure is a majority with a margin that prevents any one Senator from playing God.