It has been three months since Republican Heidi Ganahl officially launched her campaign for governor. Nobody would argue with a straight face that things are going well for the last remaining statewide elected official in Colorado (Ganahl is currently a CU Regent). In fact, Ganahl appears to be running the worst gubernatorial campaign in the entire country in 2022, which is almost impressive when you consider that 36 states will be holding elections for governor.

Ganahl has had trouble finding staffers, supporters, donors, or spellcheckers, which is at least consistent with a campaign that also has no policy ideas. As she struggles to find purchase in the 2022 election cycle, Ganahl has focused her attention on one particularly dubious narrative: “Crimenado!”

“Crimenado” is Ganahl’s attempt to shift the election away from questions about her own ability to govern. Instead, she wants Colorado voters to believe that the single most important issue of 2022 is that our streets are teeming with criminals. To hear Ganahl tell it, the City of Denver has burned to the ground two or three times in 2021 alone.

Ganahl’s Twitter account is a perfect reflection of the narrative that she hopes to land in order to get her elected Governor next November. Ganahl basically tweets about two things: University of Colorado athletics and stories about crime in Colorado. As of this writing, six of her last 10 tweets are about criminal malfeasance. She is practically gleeful in retweeting stories about murder, including this montage from Dec. 6 prefaced with this commentary: “It breaks my heart to continue seeing crime increasing in our state day after day, week after week. Colorado is a place people run TO, not FROM. As your governor, I will make fighting crime a priority.”

In her zeal to exploit the idea of criminals rampaging through the streets with impunity, you can see how events this week seemed irresistible to Ganahl. But here, she is already running into her own sort of trouble. Roughly 12 hours after news broke of a shooting spree in Denver and Lakewood, Ganahl jumped at the opportunity to blame Gov. Jared Polis: 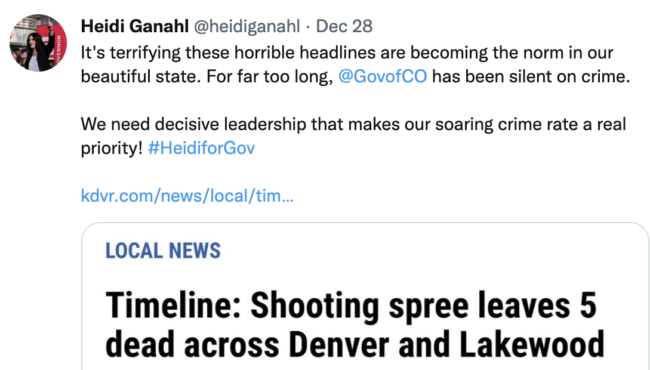 If you have been following the reporting on this story, you’ll probably recognize the problem with Ganahl’s finger-pointing. It now appears that the suspected gunman was a right-wing extremist acting out his own violent fantasy.

Via Chase Woodruff of Colorado Newsline

Ganahl was eager to try to shoehorn a mass tragedy into her narrative against Gov. Polis, yet new reporting on the shooter suggests that he was exactly the sort of alt-right lunatic that experts on domestic extremism have warned about for years and have manifested multiple times since Donald Trump descended the escalator in 2015. 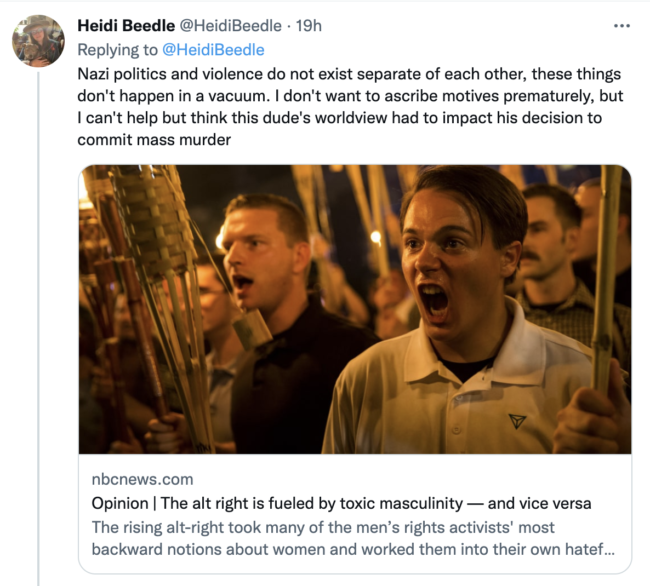 Via Heidi Beedle of The Colorado Springs Independent

More about the shooter’s motives will no doubt become known over the course of the investigation, but if the immediate picture we’re seeing continues to come into focus, then Ganahl’s eagerness to politicize a horrific tragedy as an issue of street crime instead of say, violent extremism, certainly raises questions about her judgment as a candidate for governor and her own moral sensibilities about the lives affected. And more to the point, these violent movements are exactly the problem with winking and nodding to the most fringe elements of the Trump base, which has been a quieter theme since Ganahl first announced her campaign.

The truth about crime, in Colorado and elsewhere, is much more complicated than Ganahl and friends would have you believe. As Alex Burness of The Denver Post noted this week, gun violence has been a problem FOR DECADES, not merely since Polis took office in January 2019. And while there is some data indicating that violent crime rates have increased over the last 25 years, that information needs to contain the appropriate perspective; as Alayna Alvarez noted for Axios Denver in September, “The rate of some violent crimes, like murder, remains far lower in Colorado than those recorded throughout the 1980s and ’90s.”

The problem with extremists armed to the teeth who are egged on by the irresponsible rhetoric of right-wing Republicans…well, that is also a very real trend that needs attention from leaders without ideological blinders.

The next time you see Ganahl or one of her surrogates yammering about Colorado’s “Crimenado,” remember this story.