Get More Smarter on Thursday (Nov. 4) 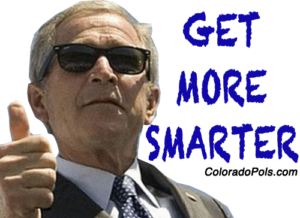 There are exactly 50 days until Christmas. Let’s Get More Smarter. If you think we missed something important, please include the link in the comments below (here’s a good example). If you are more of an audio learner, check out The Get More Smarter Podcast. And don’t forget to find us on Facebook and Twitter.

► Colorado hospitals are straining to deal with a consistent influx of COVID-19 cases. As The Colorado Sun explains:

The Colorado Hospital Association announced Wednesday that it is activating Tier 3 of the state’s Combined Hospital Transfer Center.

How bad is that? Hospitals didn’t have to activate Tier 3, the highest level, during even the busiest months of last winter’s COVID surge. But what the hospital association calls “monumental strain” on the health care system caused by the most recent spike in coronavirus cases has led to the unprecedented activation.

The new level means the transfer center, or CHTC, which helps move patients around from crowded hospitals to less-crowded ones, will operate on a statewide basis. Previously, it had operated regionally or within big health systems. But, as COVID hospitalizations continue to climb in Colorado, that’s no longer enough.

“This is an extraordinary step taken by the state’s hospitals and health systems,” Dr. Darlene Tad-y, the hospital association’s vice president of clinical affairs, said in a statement. “… Activating Tier 3 of the CHTC should send a clear message to Coloradans: our health care system is in jeopardy of being overwhelmed.”

► The Washington Post reports on details about a COVID-19 vaccine requirement from the Biden administration:

Companies with more than 100 employees will now be mandated to require coronavirus vaccinations for their workers or do regular testing by Jan. 4 under the terms of a new federal rule that will be released Friday by the Biden administration after weeks of deliberation, senior government officials said.

The hotly anticipated rule, which is being implemented on an emergency basis by the Department of Labor, is one of the White House’s most strenuous attempts to increase vaccination rates across the country to address the lingering public health crisis. The policy is already being contested by Republicans and the small but vocal anti-vaccine factions that have proved so disruptive politically over the past year.

It would require weekly testing and mandatory face-masking for workers who choose not to get vaccinated. It also specifies that employers must provide paid time for workers to get vaccinated or recover from any side effects — something critics have been asking for months. But companies are able to require employees to foot the bill for tests, officials said.

Companies with 100 or more employees will have until Jan. 4 to have all staff either fully vaccinated or implementing the testing requirements, pushing the deadline beyond the holiday season amid concerns about labor shortages.

► Congressman Joe Neguse is introducing new gun safety legislation spurred by a mass shooting at a Boulder King Soopers earlier this year. From The Denver Post:

Neguse will introduce legislation in the House Thursday to prohibit people convicted of violent misdemeanors from purchasing a firearm for five years, a measure the Lafayette Democrat said could help prevent tragedies like the Boulder King Soopers massacre from happening again…

…That suspect in the March 22 King Soopers mass shooting that left 10 people dead was convicted of misdemeanor assault in 2018 after attacking a classmate at Arvada West High School the previous year. Ahmad Al Aliwi Alissa, then 18, punched the classmate in the head without warning, and when the boy fell to the ground, continued to punch him, according to an affidavit in the case.

Alissa was sentenced to probation and 48 hours of community service. But that didn’t stop him from purchasing a gun at an Arvada gunshop days before his deadly assault at the Boulder grocery store, Neguse said.

► Are you anti-mask? Anti-vaccine? A believer in the “Big Lie”? Then the majority of Colorado voters are not very happy with you.

► As The Washington Post reports, the House of Representatives may be close to holding a vote on a big spending bill:

House Democrats are angling to vote as soon as Thursday on a $1.75 trillion measure to overhaul the country’s health care, education, climate, immigration and tax laws, provided that the party can muscle through its last-minute political feuds and renewed concerns about the bill’s cost.

Responding to reporters at her weekly news conference, House Speaker Nancy Pelosi (D-Calif.) sought to project an air of progress: She stressed that Democrats are closing in on consensus around the package and now are trying to rally votes for the initiative as well as second, parallel bill to fund improvements to the nation’s infrastructure.

Pelosi declined to outline an explicit timeline for action. Yet House leaders still took early steps to alert Democrats that votes could come perhaps before day’s end, marking a potential major milestone for President Biden’s economic agenda only hours after lawmakers released a new version of their 2,135-page proposal.

► Senator John Hickenlooper is pushing to make sure that women are receiving their “fair share” of benefits meant to assist small business owners.

► Colorado Newsline catches up on the Congressional filing of Weld County Commissioner Lori Saine. We wrote about Saine’s candidacy in CO-08 earlier this week.

► As Denver7 reports, both Democrats and Republicans are claiming victories after Tuesday’s election. David Pourshoushtari, the communications director for the Colorado Democratic Party, noted that Republican complaints about election fraud were suspiciously absent this week:

“I think it is very interesting that when Republicans lose, they call fraud. But when they win, all the sudden their fraud arguments just go out the window.”

► Chris Cillizza of CNN looks at one of the most surprising upsets of the 2021 election:

That title goes to Edward Durr, a little known — and even little-r financed — Republican who appears to have unseat Stephen Sweeney, the state Senate majority leader and one of the most powerful Democrats in the Garden State.

CNN has not yet made a projection in the race, but a count as of late Thursday morning showed Durr holding a 2,298-vote lead with 51.8% of the vote to Sweeney’s 48.1%. (Note: There may be a sizable number of ballots left to count in these counties, and if there are mail-in ballots, they could tighten the margin.)

Sweeney was considered a shoo-in for the South Jersey seat he has held since 2004. He is the longest-tenured state Senate leader in New Jersey history and was widely expected to run for governor in 2025 when current Gov. Phil Murphy (D) is term limited out of office…

…Durr, on the other hand, had only a losing race for state Assembly in 2019 under his belt. He spent two decades as a commercial truck driver and only decided to run against Sweeney when he was denied a concealed carry permit for a gun.

Durr did little in the way of campaigning and admitted that he hadn’t really expected to be victorious. The New York Times has more on Durr’s big upset.

► Jennifer Rubin of The Washington Post opines on how Democrats should respond to losses in Tuesday’s election.

► Aurora Mayor Mike Coffman appears to now have the votes to advance an agenda that had long stalled because of justifiable concerns about individual policies.

On Monday, @COHouseGOP Minority Leader @hmckean joined his fellow Larimer #coleg Rs in calling for the firing of the @larimerhealth director over an email. Yesterday, he walked it back. #copolitics https://t.co/kWbA7yF4Ds

► Voter turnout in Colorado in the 2021 election was the lowest it has been in a decade.

► POLITICO updates on progress being made by the House committee investigating the Jan. 6 insurrection.

► Vox.com considers whether or not Critical Race Theory really played a significant role in Virginia’s elections.

Congressman Doug Lamborn (R-Colorado Springs) is getting a little spammy: 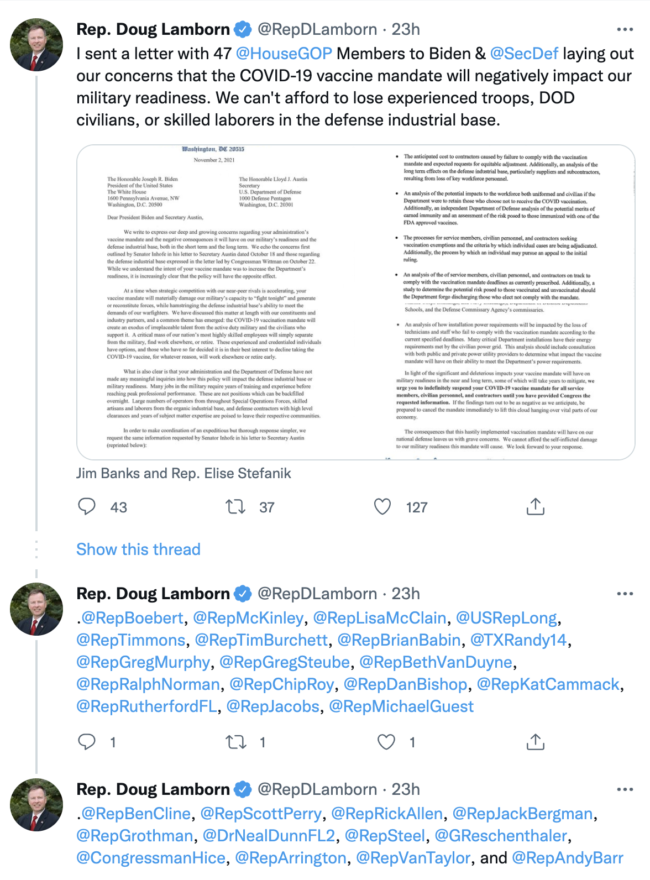 ► A city council race in Portland, Maine will be decided by the drawing of lots. As The Associated Press reports:

A ranked choice ballot where numbers were crunched by a computer ended in a tie in a City Council race, so the contest will be decided with a low-tech solution — basically, drawing straws.

The election will be settled in public, in front of Portland City Hall, when lots — something such as random straws — are drawn on Thursday. Officials had not decided by Wednesday afternoon what would serve as the lots.

Portland is one of a handful of cities that uses ranked voting for local races. The method allows voters to prioritize candidates in races where there are more than two people running. If no one gets more than 50% of the total vote, second-choice votes come into play.

The Tuesday race for an at-large council seat resulted in a numeric tie between Roberto Rodriguez and Brandon Mazer, city officials said. The two candidates both had 8,529 votes after the votes were calculated in a four-way race, officials said.

► As The Huffington Post reports, this insurrection participant totally jinxed herself:

► The importance of the defeat of three statewide ballot measures in Colorado is a political outcome that cannot be overlooked.