New polling data released this week is confirming something that we have long suspected: Colorado voters are absolutely not on board with conspiracies and contrarian beliefs pushed by Republicans in our state. The latest issue of The Mountaineer — a resource for progressives published by Global Strategy Group and ProgressNow Colorado — shows that the majority of Colorado voters are rowing in the opposite direction from right-wing Republicans in 2022.

We’ve discussed at length in this space the problem that Republicans have in continuing to promote the “Big Lie,” the idea that the 2020 Presidential election was somehow stolen from Republican Donald Trump. The “Big Lie” might be the only truth for Republican politicians in Colorado, but it doesn’t appear to translate to support from voters who aren’t part of the GOP base. Republican gubernatorial candidate Heidi Ganahl, for example, lit her own campaign on fire in September when she repeatedly dodged very obvious questions about whether she considered the 2020 election results to be legitimate. According to polling results from The Mountaineer, 67% of Colorado voters believe that “Joe Biden legitimately won the 2020 election.” Furthermore, 64% of respondents say that they have an unfavorable opinion of “conspiracy theorists who insist Donald Trump won in 2020” (including 53% who have a VERY unfavorable opinion of this group of people).

Colorado voters are equally turned off by anti-maskers and anti-vaxxers. Voters support various mask and vaccine mandates by solid margins, with 54% expressing an unfavorable opinion of anti-vaxxers. By a 16-point margin, Colorado voters trust Democrats over Republicans on responding to the COVID-19 pandemic. Republicans who insist on speaking out against COVID-19 safety measures are holding a minority opinion across the board: 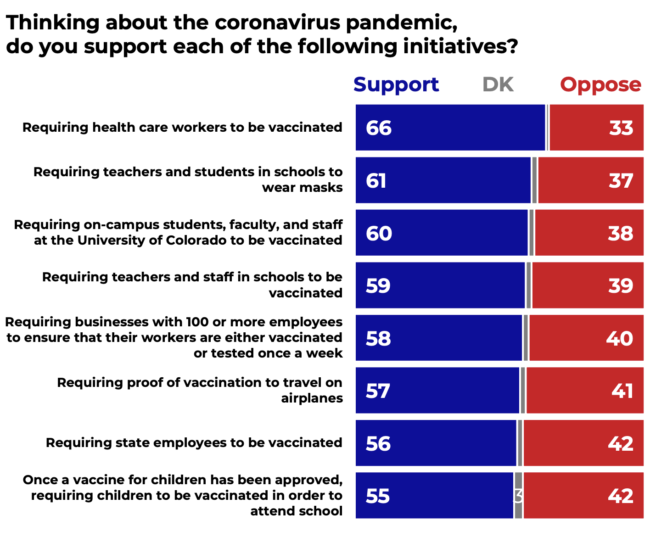 Republicans in Colorado who perpetuate these views, as well as support for strict abortion restrictions in Texas, are allowing themselves to be labeled as extremists to the detriment of their political chances in 2022. As The Mountaineer concludes:

A generic Democrat for state legislature starts with a +7 advantage over a Republican, and this lead doubles to +13 after voters learn about the GOP’s “crazy” positions. Democrats make particularly large gains with unaffiliated and white women, as well as suburban voters.

It would seem like an obvious move for Republicans to back away from this kind of messaging, but “very conservative Republican” voters in Colorado are adamant that GOP politicians follow these signals. When winning a Republican primary means securing the support of these voters, Republican candidates resign themselves to alienating the majority of Colorado’s electorate.

This is a reality that hasn’t changed. It has proven itself in “wave years” for both parties. And there’s nothing we see in the Colorado Republican Party’s emerging message for 2022 to suggest that’s going to change.