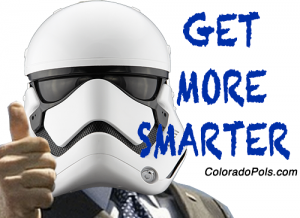 You only have a few more days to vote and stick your ballot in the mail, so get to it. Visit GoVoteColorado.com to check on the status of your mail ballot for 2021. Let’s Get More Smarter. If you think we missed something important, please include the link in the comments below (here’s a good example). If you are more of an audio learner, check out The Get More Smarter Podcast. And don’t forget to find us on Facebook and Twitter.

► The refusal of Senate Republicans to even debate a new election integrity bill SHOULD be the last straw for Democrats such as Sen. Joe Manchin of West Virginia. As Paul Waldman and Greg Sargent write for The Washington Post:

On Wednesday, all 50 Republicans in the Senate — including supposed moderates such as Lisa Murkowski of Alaska and Susan Collins of Maine — voted to filibuster the Freedom to Vote Act. That’s a stripped-down version of sweeping voting rights legislation Democrats have advocated.

If Manchin (or anyone else) needed more proof that Republicans will never partner with Democrats to secure voting rights and democracy, this was it.The Freedom to Vote Act was, for all intents and purposes, Manchin’s own bill. He demanded the changes that made it less ambitious than the For the People Act championed by progressives.

It was redesigned to his specifications. So instead of requiring nonpartisan redistricting commissions, it allows states to determine the mode of redistricting while establishing standards of fairness that would be enforced by courts. It also creates national standards for early voting and mail voting, but also allows voter ID requirements, albeit with some protections.

No Republican voted for this.

Waldman and Sargent note that two prominent voices are growing louder about the need to reform the filibuster: Angus King of Maine and Jon Tester of Montana. Says King:
“I’ve concluded that democracy itself is more important than any Senate rule.”

President Biden is also signaling that he would be open to changing Senate filibuster rules in order to pass voting rights legislation.

► Colorado Republican candidates continue to struggle to come up with a decent answer about the “Big Lie.” Many of the top statewide candidates seem to have coalesced around the shaky narrative that Joe Biden is the President and that the election was not fraudulent in Colorado…but maybe it was everywhere else.

The latest attempt by a statewide Republican candidate to answer this question came from Senate hopeful Gino Campana; check out the transcript of this BRUTAL back-and-forth with right-wing radio host Peter Boyles. The interview contains a line that could go down in infamy: “Don’t 9News me!”

► Hospitalizations from COVID-19 in Colorado are trending in the wrong direction compared to the rest of the country, as Colorado Newsline explains:

There are 1,130 people in the hospital with COVID-19 as of Oct. 21, Gov. Jared Polis said during a news briefing Thursday, and 893 of those cases, or about 80%, are unvaccinated individuals.

“This is a very stark reminder to anyone who thought this pandemic was over and that they could slip by without getting vaccinated,” Polis said. “This is a wake up call. If you haven’t been vaccinated, you’re facing a grave threat.”Polis said that crisis standards of care are “ready to be implemented if needed, potentially tweaked or improved.” Idaho and New Mexico both recently implemented crisis standards of care.

Hospitalizations are increasing among all age groups, but more rapidly in older populations. State epidemiologist Rachel Herlihy said during the briefing that could be due to waning immunity in older people who got a vaccine earlier this year.

As Denver7 reports, 93% of Colorado ICU beds are currently in use. Governor Jared Polis says Colorado may need to ask for help from the National Guard if these trends continue.

► And now, some good COVID-19 news: Boosters for everyone! As The Washington Post reports:

Tens of millions of Americans can sign up to get Moderna and Johnson & Johnson boosters beginning Friday after the nation’s top public health official endorsed recommendations from expert advisers that the shots are safe and effective at bolstering protection against the coronavirus.

The green light from Rochelle Walensky, director of the Centers for Disease Control and Prevention, means that eligible Americans at risk of severe disease can choose any of the three boosters now authorized in the United States regardless of their original shot.

“The evidence shows that all three COVID-19 vaccines authorized in the United States are safe — as demonstrated by the over 400 million vaccine doses already given,” Walensky said in a statement Thursday night, several hours after receiving unanimous recommendations from the expert panel, called the Advisory Committee on Immunization Practices. “And, they are all highly effective in reducing the risk of severe disease, hospitalization, and death, even in the midst of the widely circulating delta variant.”

Get moving, folks. Boost that thang up!

► The U.S. Supreme Court declined to block a restrictive Texas abortion law in a decision on Friday. As CNN reports:

The Supreme Court allowed a Texas law that bars most abortions after six weeks to remain in place for now, but it agreed to hear oral arguments on the law next month.

The law, banning abortions often before a woman knows she is pregnant is in stark contrast to Roe v. Wade, the 1973 landmark decision legalizing abortion nationwide prior to viability, which can occur at around 24 weeks of pregnancy.

In agreeing to hear the case under such an expedited time frame, the court said Friday that it would focus specifically on the unusual way in which the Texas legislature crafted the law. Texas officials are barred from enforcing it. Instead, private citizens — from anywhere in the country — can bring a civil suit against anyone who assists a pregnant person seeking an abortion in violation of the law.

► Congressperson Lauren “Q*Bert” Boebert is one of only four Members of Congress who are actually Pro-America.

Gov. Greg Abbott announced Thursday his appointment of Scott, a Fort Worth attorney, to be the next Texas secretary of state. The position has been vacant since Ruth Hughes resigned from the office in May.

“John Scott is a proven leader with a passion for public service, and his decades of experience in election law and litigation make him the ideal choice for the Texas Secretary of State,” Abbott said in a statement. “John understands the importance of protecting the integrity of our elections and building the Texas brand on an international stage. I am confident that John’s experience and expertise will enhance his oversight and leadership over the biggest and most thorough election audit in the country.”

Scott will serve as the interim secretary of state until he is confirmed by the legislature, which is not scheduled to meet again until 2023.

What could possibly go wrong? You know, aside from breaking the entire election process in Texas.

► Congressman Jason Crow (D-Aurora) is sponsoring legislation with Wyoming Republican Rep. Liz Cheney to make it impossible for “domestic terrorists” to receive a national security clearance of any kind.

► The Denver Post talks with the director of the Tri-County Health Department about its pending breakup with two of the counties it serves.

► 9News takes a look at Proposition 120, one of three statewide measures on the 2021 ballot.

In related news, a judge dismissed a lawsuit that sought to invalidate Amendment 78.

► Colorado doesn’t have a statewide building code? There’s some interesting news from this Colorado Sun story by Jesse Paul.

► Governor Jared Polis isn’t thrilled about a potential renaming decision made by the Colorado Geographical Naming Advisory Board.

► Charles Ashby of The Grand Junction Daily Sentinel has more on a loss at the State Supreme Court for Mesa County Clerk and Recorder Tina Peters.

► Some political endorsements are more helpful than others. And some are worse.

► POLITICO updates on the infrastructure spending dealmaking in Washington D.C.

► As Denver7 reports, officials are growing increasingly concerned about drought conditions in the Southwest as La Niña approaches.

► A new social network platform being pushed by Donald Trump is already getting hammered by pranksters.

► An armed militia group in Colorado is encouraging people to turn out to a Colorado Springs school board meeting because they are mad about mask mandates.

► A woman running for Secretary of State in California claims her prayers were responsible for the murder of a nearby witch. Rachel Hamm seems totally normal and of course has the support of many Trumpians.