Boebert + Gaetz: The Band Is Back Together

Apologies, not the band. The squad: 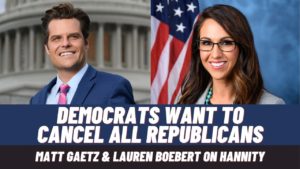 Republican Rep. Matt Gaetz, representing the region of Sunshine State affectionately known as “Floribama,” remains under a cloud as an investigation into alleged trafficking of underage women for sex continues. Gaetz’s alleged partner in crime, former Seminole County tax collector Joel Greenberg, is reportedly singing like a canary to federal prosecutors, who just this week added more lawyers to the probe into Gaetz’s role in the larger sex trafficking investigation. Gaetz’s regularly erratic behavior took another bizarre turn this week on the floor of the U.S. House when he announced “I think someone may be trying to kill me” based on an anonymous Twitter threat he allegedly received.

Everybody remembers what Rep. Lauren “Q*Bert” Boebert, seated next to Rep. Gaetz in the photo above taken this week, had to say when she was last questioned about Gaetz’s scandals back in April right?

“Isn’t he from Florida? I’m from Colorado,” GOP Rep. Lauren Boebert said in response to questions about Gaetz. [Pols emphasis]

Sometime between then and the present day, if there ever was any real attempt to put distance between the two after close collaboration at the very beginning for Boebert’s term, it looks like Boebert and Gaetz got things patched up! It’s always struck us as odd how, after Boebert’s professed support for the “QAnon” conspiracy theory that involves as a central plot point the trafficking of children, she’s become so persistently cozy with a guy accused of trafficking actual children.

Also, Rep. Boebert was born in Florida. So that answer was always kind of silly.