Get More Smarter on Tuesday (Oct. 12)

Able to leap both genders in a single bound! Let’s Get More Smarter. If you think we missed something important, please include the link in the comments below (here’s a good example). If you are more of an audio learner, check out The Get More Smarter Podcast. And don’t forget to find us on Facebook and Twitter.

► The Colorado Supreme Court will hear arguments today about whether to approve a Congressional redistricting map in Colorado. As Colorado Public Radio reports:

The court will hear oral arguments on Tuesday from the commission and from groups who say the commission failed to meet constitutional requirements. In total, fifteen organizations, local governments and individuals have filed briefs supporting or opposing the final map.

Justices will either approve the map, setting it in stone for the next decade, or they will send it back to the commission with guidelines for revisions. The state must have its final map no later than December 15th, which will give Congressional candidates adequate time to prepare ahead of the November 2022 election.

Democrats would likely maintain control of the Colorado House under a new map of the chamber’s 65 districts headed to the state Supreme Court for final review.

The Independent Legislative Redistricting Commission voted 11-1 Monday night to approve the map, with Commissioner Gary Horvath, a Democrat from Broomfield, casting the lone “no” vote.

The Colorado Supreme Court now has until Nov. 15 to approve the map or send it back to the commission for revisions. Legal challenges are likely.

Democrats have such a sizable advantage in the State House (41-24) that it would have been all but impossible to draw a map that would change this dynamic.

► Mesa County Clerk and Recorder Tina Peters held a bananas press conference on Monday in which no new information was presented and someone in the crowd was falsely accused of assault. You can watch the entire event or read our diary about the blow-by-blow here.

Charles Ashby of The Grand Junction Daily Sentinel has more on Monday’s lunacy:

What began as a press conference Monday, to which no member of the press was actually invited, turned into a brief melee between supporters of Mesa County Clerk Tina Peters and those who, well, don’t.

At the morning press conference on the steps of the Old Mesa County Courthouse, Peters and Sherronna Bishop, a Garfield County resident who has been side-by-side with the embattled clerk, supporting her in claiming there was election fraud, again presented nothing new to prove their claims.

Instead, they repeated the same “evidence” of problems with Dominion Voting System tabulation machines, repeating claims that computer files were erased, but failing to say whether any of the files had anything to do with previous elections.

Ashby also has more details about Roxanne Lewis, the woman who pretended to be assaulted at the event:

Lewis pleaded guilty in 2016 to stealing money over several months from vending machines at the Canyon View car wash at the corner of Broadway and Redlands Parkway, a business she had sold months earlier to John Pugliese, the then-husband of former Mesa County Commissioner Rose Pugliese.

It was reported that Lewis is a member of the local Stand for the Constitution group that has called on local governments to declare the city and county “constitutional sanctuaries.”

► The Denver Post has the latest on Colorado’s COVID-19 hospitalization rates:

Colorado’s COVID-19 hospitalizations, cases and deaths all moved in the wrong direction over the last week, making it appear increasingly unlikely that the worst of the state’s fifth wave is over.

The Colorado Department of Public Health and Environment reported 1,012 people were hospitalized with confirmed or suspected COVID-19 as of Monday afternoon, up from a recent low of 907 on Oct. 2. On Friday, state health officials raised concerns about the increase in hospitalizations, which had been slowly falling since late September, and urged eligible people who haven’t gotten vaccinated to do so quickly.

New coronavirus infections also were up, with 13,621 cases recorded in the week ending Sunday, though that’s within the range where the numbers have bounced since early September. The percentage of tests coming back positive also rose over the last week, though, raising concerns that the state could be missing infections.

► Texas Gov. Greg Abbott continues his unofficial competition with fellow Republican Gov. Ron DeSantis of Florida to see which state governor can get more of its residents killed by COVID-19. As The Washington Post reports:

Texas Gov. Greg Abbott (R) on Monday banned any entity in his state — including private businesses — from mandating coronavirus vaccines for workers or customers, expanding prior executive orders from his office that prohibited state government entities from imposing similar requirements.

Abbott’s move puts him at odds with some large corporations and with the Biden administration, which last month announced plans to require all employers with 100 or more workers to adopt vaccine mandates or testing regimens. A number of large private companies in Texas have issued mandates…

…Abbott called the Biden administration’s sweeping plan “yet another instance of federal overreach,” saying in his order that the administration is “bullying” private entities into vaccine mandates, hurting the livelihoods of Texans and threatening the state’s economic recovery from the pandemic.

Boebert spoke on Monday morning in the shadow of Colorado’s last remaining monument to Christopher Columbus, a sandstone bust that sits in the median of a busy commercial street in Pueblo. The bust has been a political flashpoint as Indigenous activists and the Italian Americans who support the monument are at a stalemate over its future.

While Colorado no longer recognizes Columbus Day, replacing it last year with Frances Xavier Cabrini Day, the Pueblo chapter of the Order Sons and Daughters of Italy in America still held its annual celebration in what they said was a ceremony to honor the cultural and economic contributions Italian immigrants made to the southern Colorado city.

Speakers, including Boebert, lauded Columbus’ “discovery” of America that led to European colonization and Westernization of the land already occupied by Indigenous people.

The Pueblo Chieftain reports that Boebert’s brief speech angered several people in the crowd, which should surprise nobody.

► Congressman Doug Lamborn (R-Colorado Springs) is accusing Vice President Kamala Harris of having an “anti-semitic worldview.” We’ll remind you that Lamborn is quite possibly the single dumbest Member of Congress.

► Efforts to recall Gov. Jared Polis and/or Secretary of State Jena Griswold are (still) not going well, as you can see from this campaign finance report image: 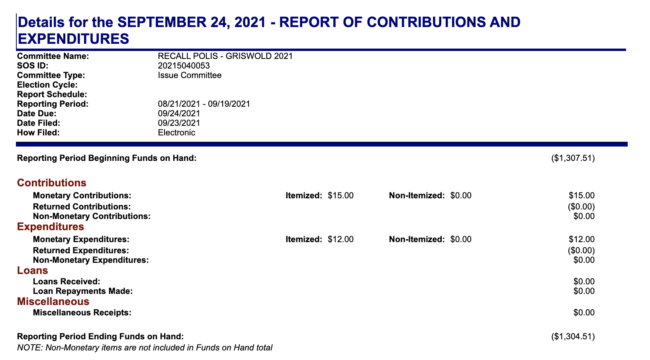 ► There is nobody who former Trump coup adviser John Eastman won’t threaten with legal action.

► POLITICO reports on a battle in West Virginia after redistricting cost the state one of its three congressional seats.

► The New York Times looks at the political battle over mask and vaccine mandates in New Jersey, which is one of two states (the other being Virginia) holding elections for governor this fall.

New Jersey’s election on Nov. 2 also provides one of the first statewide tests of how voters feel about strict coronavirus-related mandates as the health crisis stretches into its 20th month and pandemic fatigue mounts.

Voters surveyed in polls continued to give [Gov. Philip] Murphy some of his highest marks for the way he has responded to the pandemic, and he has said he believed it was one of the most defining issues separating him and Mr. Ciattarelli. Last week, Mr. Murphy refused to rule out a Covid-19 vaccine mandate for students, a step taken by California, where, as early as next fall, inoculation against the virus will be required to attend school.

► Douglas County is doing a great job of confusing the hell out of people on whether or not students should be wearing masks in school, as Denver7 reports.

► Inside Elections takes an early stab at predicting the outcomes of Colorado congressional races now that redistricting is (almost) complete.

► As Westword reports, Denver’s City Park may reopen next month. 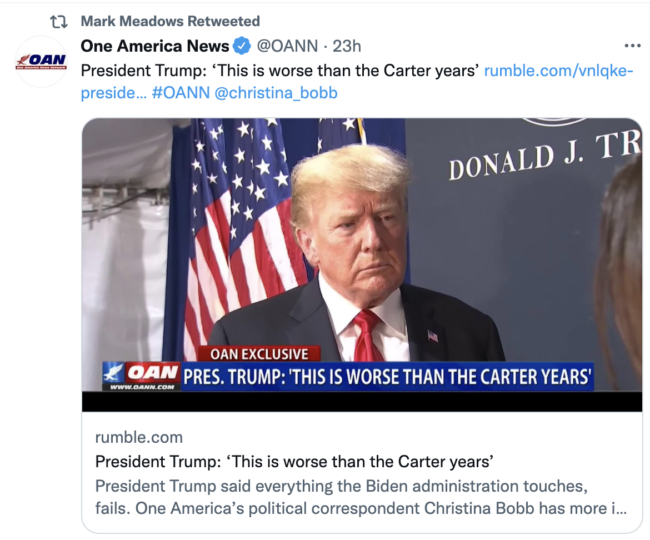 Polis’ record on this is going to be tough for Republicans to run against. https://t.co/GOPcUqXfsv

► Remember all of those Republican politicians who claimed that people weren’t returning to work because they were “incentivized” to stay home thanks to extended unemployment benefits? As CNN reports, reality did not support this rhetoric:

Out-of-work Americans did not rush back into the job market after beefed-up unemployment benefits ended nationwide in September.

The labor force shrank last month for the first time since May, signaling that more people were opting to sit on the sidelines and not actively look for work, according to the federal jobs report released Friday.

“If unemployment benefits were the driving force behind labor market dynamics, then you would not have seen that effect,” said Gordon Gray, director of fiscal policy at the American Action Forum, a right-leaning think tank. 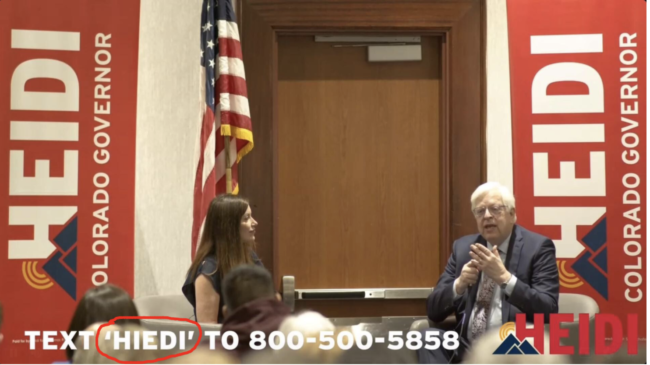