Get More Smarter on Thursday (Sept. 23)

Happy “Kyrgyz Language Day.” Please celebrate responsibly…and without vowels. Let’s Get More Smarter. If you think we missed something important, please include the link in the comments below (here’s a good example). If you are more of an audio learner, check out The Get More Smarter Podcast. And don’t forget to find us on Facebook and Twitter.

► As The Washington Post reports, Congressional Republicans’ insistence on refusing to extend the debt ceiling means a government shutdown could be right around the corner:

The White House budget office will tell federal agencies on Thursday to begin preparations for the first shutdown of the U.S. government since the pandemic began, as lawmakers on Capitol Hill struggle to reach a funding agreement.

Administration officials stress the request is in line with traditional procedures seven days ahead of a shutdown and not a commentary on the likelihood of a congressional deal. Both Democrats and Republicans have made clear they intend to fund the government before its funding expires on Sept. 30, but time is running out and lawmakers are aiming to resolve an enormous set of tasks to in a matter of weeks.

House Democrats earlier this week approved a measure to fund the government, suspend the debt ceiling, and approve emergency aid such as disaster relief. But that plan is expected to die in the Senate amid GOP refusal to support Democratic attempts to lift the debt ceiling.

► Congressperson Lauren “Q*Bert” Boebert has been using her campaign account as a personal slush fund since she was elected in November 2020. As The Denver Post reports, she’s doing it AGAIN:

The filings, submitted to the FEC on Tuesday, also indicate that Boebert reimbursed her campaign for the $6,650 worth of payments. Representatives for the congresswoman could not immediately be reached for comment.

Each of the four payments in question (two for $2,000 each and another two for $1,325 each) were amended to show payments for the same amount, description and on the same days to John Pacheco, whose address is the same as Shooters Grill in Rifle, which Boebert owns. Pacheco’s relationship to Boebert was not immediately clear.

The latest discrepancy appeared in a July campaign finance report for the committee Lauren Boebert for Congress. Payments to Venmo were described as “Personal expense of Lauren Boebert billed to campaign account in error. Expense has been reimbursed.”

This is NOT LEGAL, as we’ve been explaining for months in this space.

► Since we’re on the subject of Boebert, here’s more about her potential involvement in efforts by former President Trump to overturn the 2020 election and, well, initiate a coup attempt.

Colorado’s independent congressional redistricting commission has entered the final stretch in fashioning a map for the next decade that incorporates a new eighth district and tries to keep intact communities of interest, such as Hispanic and Latino voters and urban and rural economic interests. That and avoiding splitting cities and counties into separate districts headlined commission discussions Wednesday…

…Commissioners have a Sept. 28 deadline to approve a map and must submit it to the state Supreme Court by Oct. 1.

Final approval by the 12-member commission requires at least eight “yes” votes, including two unaffiliated commissioners. If the commission fails to submit a final map next week, a staff map must be submitted, without amendments, for judicial review. The court must approve a congressional redistricting map by Dec. 15, 2021.

► The FDA has authorized COVID-19 booster shots for older Americans who have already received the Pfizer vaccines. Here in Colorado, you can get free at-home COVID-19 tests with a quick signup online.

► Americans have lost confidence in the U.S. Supreme Court. As Jennifer Rubin writes for The Washington Post, this should surprise nobody:

A raft of recent polls shows that the Supreme Court has lost stature in the eyes of the public. Most dramatically, a Marquette University Law School poll finds the court’s approval dropping from 66 percent a year ago (and 60 percent as recently as July) to 49 percent. In the wake of the court’s decision to unabashedly rewrite Section 2 of the Voting Rights Act and to duck ruling on the Texas abortion bounty law, Democratic support plunged from 59 percent in July to 37 percent.

This comes despite — or maybe in part because of — Justices Clarence Thomas, Stephen G. Breyer and Amy Coney Barrett’s public protestations that they and their colleagues are not partisan extensions of the presidents who appointed them. The more they whine that they are not “hacks,” as Barrett put it, the more obvious it becomes that they are not only partisan but also entirely un-self-aware. One would have to be deliberately dense not to recognize that right-wing justices’ “judicial philosophy” inevitably and intentionally leads to right-wing policy outcomes, exactly as the groups who pushed for their nomination and confirmation intended.

The perception of political bias increases once justices emerge from behind the bench to enter into nonlegal discussions or speak in partisan settings (looking at you, Justice Barrett). Once upon a time, justices rarely spoke in public, confining their views to written opinions. It’s a practice worth restoring, lest the public perceive justices as running a self-serving campaign to justify their right to a lifetime appointment with which to carry out their partisan mandates.

The nub of the problem is not that (or not only that) voters are angry that the court allowed a diabolical and invasive Texas law to go into effect. The problem, rather, is that once the facade of impartiality and nonpartisanship is shattered, it is nearly impossible to get back. [Pols emphasis]

► As POLITICO reports, the investigation into the January 6 insurrection is nearing the stage in which former President Trump comes under close scrutiny.

► Former Colorado Republican State Party Chair Ryan Call has been disbarred over allegations that he embezzled hundreds of thousands of dollars from a pro-Trump Republican PAC.

► As Colorado Public Radio reports, Colorado Democrats are pushing the EPA to get tougher on methane regulations from oil and gas operations:

Colorado’s Democratic Congressional delegation is asking the U.S. Environmental Protection Agency to “swiftly” adopt stricter rules on methane, a potent greenhouse gas and byproduct of oil and gas drilling, saying an aggressive approach could cut methane pollution in half by the year 2030.

“Human-caused methane emissions are responsible for at least 25 percent of the warming we are experiencing today, with recent studies finding that methane alone contributes around half a degree to global warming,” states the letter signed by Democratic Sens. Michael Bennet and John Hickenlooper, as well as Democratic Reps, Diana DeGette, Joe Neguse, Jason Crow and Ed Perlmutter.

“Climate change is happening, and it’s happening more and more quickly. We’ve had smoke sitting in the Denver area for two and a half months now,” Perlmutter said. “So we just think we’ve got to, as a nation, do all we can to reduce our pollution to try to slow this change that’s happening.”

And what about Colorado Republicans. Well…

The three Republicans in the state’s delegation did not sign the letter.

► The prospect of voting rights legislation in Congress is looking dimmer by the day, as Colorado Newsline reports:

Activists are ramping up the pressure on Senate Majority Leader Chuck Schumer to move on his chamber’s version of a voting rights bill, even though there’s no sign there will be enough Republican support to advance it.

Alternatively, they’re pressing for an end to the filibuster, though there’s no indication there would be enough Democratic support for that yet either.

The push comes as Democrats in Congress face tough decisions in the coming days on how to move ahead on a massive budget reconciliation bill, infrastructure legislation, disaster relief, continued spending to avert a government shutdown and help for Afghan refugees…

…Advocates argue that Democrats need to quickly pass the measure because Republican-led states continue to pass restrictive voting laws and are engaged in drawing new congressional and legislative districts, following the release of census numbers.

► The Ft. Collins Coloradoan reports on the impact of ICU departments at local hospitals being full for more than a month now because of COVID-19 cases.

► Most complaints about mobile home parks in Colorado are targeted at four particular corporate owners.

► As The New York Times reports, federal regulators are moving closer to creating a set of rules to govern cryptocurrencies.

► As CNN explains, advocates of The Big Lie are looking for new angles for “investigating voter fraud” in Arizona and a handful of other battleground states.

► A group of Democrats in Congress are proposing abolishing the “Space Force,” the newest branch of the military that was added during the Trump administration. 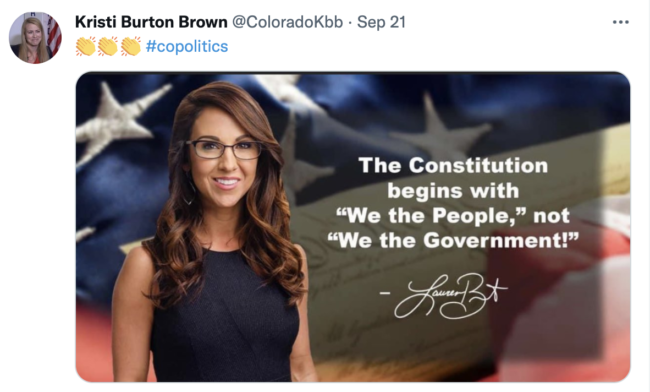 ► The right wing grift is strong, as The Huffington Post reports:

Right-wing televangelist Kenneth Copeland is begging viewers to send him cash to support his private jet so he won’t have to deal with coronavirus vaccine mandates to travel, which he called “the mark of the beast.”

Copeland, who in the past has claimed that he needed a private jet to avoid “demons” on commercial flights, made the claim during his “VICTORYthon” fundraiser on Tuesday.

Where do we send the check? 🙄

“Perhaps you remember your first edible.”

— Brian Williams on @11thHour coming out of our video and closing the show. pic.twitter.com/1CKjGLGUyP

► Two of three Christian schools in Jefferson County that were refusing to enforce mask mandates have come to an agreement with the Jeffco Department of Health. Faith Christian Academy is still fighting for freedumb.