Cause And Effect: How Boebert Reacted To Eastman’s Coup Plot

The publication of the new tell-all book Peril from legendary investigative journo Bob Woodward and veteran Washington Post reporter Bob Costa, detailing the chaotic final days of Donald Trump’s desperate attempts to overturn the results of the 2020 elections, has exposed new details about the involvement of then-University of Colorado Visiting Scholar of Conservative Thought and Policy John Eastman in the plot to hand the election to Trump during the final certification of the results from the states counted in Congress on January 6th. Eastman has become a major political headache for (among others) Colorado GOP candidate for governor Heidi Ganahl, who as CU Regent enthusiastically supported Eastman’s guest gig at Colorado’s flagship university.

As we discussed on Tuesday, Eastman was the primary author of the plan that would have involved Vice President Mike Pence making a series of unprecedented changes to the rules to either declare Trump the winner outright or throw the question to the House where each state would have one vote–a scenario in which Trump might prevail due to Republicans holding a majority of state congressional delegations.

Ex-President Trump issued a statement yesterday that, far from denying the facts as laid out in Peril, blamed Republicans for not having the guts to see Eastman’s plan through:

I spent virtually no time with Senators Mike Lee of Utah, or Lindsey Graham of South Carolina, talking about the 2020 Presidential Election Scam or, as it is viewed by many, the “Crime of the Century.” Lindsey and Mike should be ashamed of themselves for not putting up the fight necessary to win… [Pols emphasis] 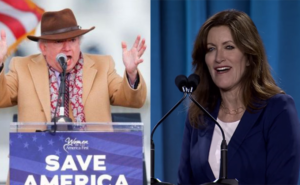 Lee received a two-page memo from the White House on Saturday, January 2, authored by legal scholar John Eastman, who was working with Trump.

Lee was shocked. He had heard nothing about alternative slates of electors. In the arcane process set out in the Constitution, electors cast the final votes for president, as they had done on December 14. And in four days, the Senate was required to formally count those votes to certify the election…

By January 2, Lee knew nothing had happened. It had all been talk, mere noise on the matter, which was rigorously spelled out in the Constitution.

“What is this?” Lee wondered as he glanced down at Eastman’s document.

An impt date in our book: Sat, Jan. 2. That’s when Sen. Lee gets the Eastman memo. That same day, Graham, Giuliani, and Meadows meet @ WH. It was the Trump WH’s full-court press to get those senators involved, all as they pressured VP Pence.

The scenes & docs tell the story.

But that’s not the only corroboration of this key date in what became the final failed push to overthrow American democracy. Rep.-elect Lauren Boebert Tweeted on the evening of January 2nd, the eve of Boebert’s swearing-in, her excitement about the coming days–a prelude to Boebert’s “Today is 1776” declaration on the morning of January 6th:

For the first time, we can reconstruct with some confidence what those “great words” from President Trump on the night of January 2nd were. They were almost certainly John Eastman’s plan to overturn the election. We’ll never know what might have happened had Vice President Mike Pence gone along with this scheme. Rather than being intimidated by the riot that disrupted the count during the afternoon of January 6th, Pence was apparently more resolute than ever after the riot to fulfill his duty–to the Constitution, not Donald Trump.

But not Lauren Boebert. Boebert was ready for the coup.

As for Heidi Ganahl, it’s clear that this “divisive question” is not going away.