Get More Smarter on Wednesday (Sept. 8)

Happy “International Literacy Day.” Please read responsibly. Let’s Get More Smarter. If you think we missed something important, please include the link in the comments below (here’s a good example). If you are more of an audio learner, check out The Get More Smarter Podcast. And don’t forget to find us on Facebook and Twitter.

► As Meg Wingerter reports for The Denver Post, COVID-19 hospitalizations in Colorado have reached their highest levels since January and are approaching the peak levels of Spring 2020:

Data from the Colorado Department of Public Health and Environment showed 12,877 people tested positive for COVID-19 in the week ending Sunday.

As of Tuesday afternoon, 957 people were hospitalized with confirmed or suspected COVID-19. The last time more people infected with the virus were receiving hospital care was Jan. 6, when the state was still recovering from the massive winter spike.

Counting only people with confirmed infections, 862 were hospitalized, which is only 26 fewer than on the worst day in April 2020, said Beth Carlton, an associate professor of environmental and occupational health at Colorado School of Public Health. The state’s COVID-19 trackers generally focus on hospitalizations where the person has tested positive, because of volatility in the number of people being evaluated for the virus from day to day.

“The number of people in the hospital is high, and poised to exceed the April 2020 peak,” she said.

Think about this for a moment: Hospitalizations in Colorado could soon surpass levels from the very first month in which COVID-19 was spreading through our state. Hospitalizations over Labor Day Weekend were worse this year than in 2020.

Vax that thang up, people! And lock up the mindless assholes who are trying to prevent other people from getting vaccinated. And stop listening to these people.

Cases of COVID-19 are on the rise everywhere, it seems, with doctors growing more concerned about an uptick in pediatric cases. Some school districts in Texas are moving to mandatory mask requirements after the death of two middle school teachers.

► The Washington Post reports on a big solar energy announcement from President Biden:

The Biden administration announced a blueprint Wednesday outlining how solar energy could produce nearly half of the nation’s electricity by mid-century, part of its ambitious bid to address climate change.

The new Energy Department analysis shows how the United States can scale up production of solar panels, which now provide 3 percent of the nation’s electricity, to 45 percent over the next three decades.

The move, which would transform the nation’s energy industry and infrastructure, shows how President Biden is determined to reshape the economy and cut U.S. greenhouse gas emissions in the face of staunch political opposition.

While the administration has not set a specific solar energy target, the president has called for 100 percent of the nation’s electricity to come from clean energy by 2035.

Remember when we had a President who was so anti-renewable energy that he believed wind turbines caused cancer? Elections matter.

► The Denver Post reports on the 169 new laws that took effect in Colorado on Tuesday.

► The Washington Post reports on a YUGE moment for women’s rights in Mexico:

Mexico’s supreme court voted Tuesday to decriminalize abortion, a striking step in a country with one of the world’s largest Catholic populations, and a decision that contrasts with tighter restrictions introduced across the border in Texas.

Ten supreme court judges ruled unconstitutional a law in northern Coahuila state that imposed up to three years of prison for women who underwent illegal abortions, or people who aided them. The eleventh judge was absent during the vote. The ruling is binding on other states.

“Today is a watershed in the history of the rights of women and pregnant people, above all the most vulnerable,” Chief Justice Arturo Zaldívar said.

The vote comes as a powerful women’s movement is transforming Mexico. Female politicians now make up half of Congress, and an ambitious constitutional reform passed in 2019 aims to ensure gender equality in senior government positions. While abortion remains illegal in most of Latin America, there has been a surge in demonstrations demanding more rights for women, particularly focused on rising violence.

► Click here for a deeper look at the newest Congressional Redistricting Map released on Friday.

► According to a press release from the Governor’s office, Colorado is getting a bunch of new jobs from the sports betting industry:

The Colorado Office of Economic Development and International Trade (OEDIT) announced today that Tipico, one of the largest online sports betting companies in the world, has selected Colorado as home to its new technology hub.

The company, established in Europe in 2004, expects the Colorado location to add as many as 441 jobs over the next eight years. Tipico currently has a 42-person office in Hoboken, NJ, and recently launched their proprietary sports betting product to consumers in the Centennial State.

“Colorado voters voted to make Colorado one of the first states to legalize sports betting and use the revenue generated to protect our way of life and precious water resources that support our outdoor recreation economy and agricultural community,” said Governor Jared Polis. “This move proves what we already know: Colorado is the best place to live and work and 441 new jobs will be created in Colorado thanks to this voter-driven decision.”

► The Colorado Springs Independent reports on the impact of ending the eviction moratorium:

Many landlords felt a sense of relief on Aug. 26, when the U.S. Supreme Court vacated an extension of the federal moratorium on evictions for nonpayment of rent. But landlords and tenants may be dealing with fallout from the 17-month moratorium for a long time.

“It has definitely led to a lot of uncertainty for people,” says Patrick Noonan, manager of Colorado Housing Connects, an organization that helps landlords, tenants and homeowners find resources and is one of four nonprofits that administer federal rental assistance funds in partnership with the Colorado Division of Housing.

► As POLITICO reports, Republicans are using the bogeyman of “Critical Race Theory” to excite a new generation of local school board candidates who are easily susceptible to conspiratorial nonsense.

► Colorado Newsline looks at 9/11 from the perspective of people working at NORAD in Colorado Springs.

► At least this isn’t complicated.

► As The Colorado Sun reports, the Douglas County Commissioners have voted to form their own health department as part of the process of leaving Tri-County Health Department. Naturally, the DougCo Commissioners appointed themselves to two of the five seats on a new health board.

► A Colorado company is leading the way in the creation of solid state batteries used in electric vehicles.

► The air quality in Denver is still shit.

► Former President Trump has apparently settled on his preferred candidate to challenge Wyoming Rep. Liz Cheney in a 2022 Republican Primary.

► The City of Denver is temporarily shutting down Civic Center Park to clean up the area.

Okay, Doug, you win: You are definitely the most worthless Member of Congress. 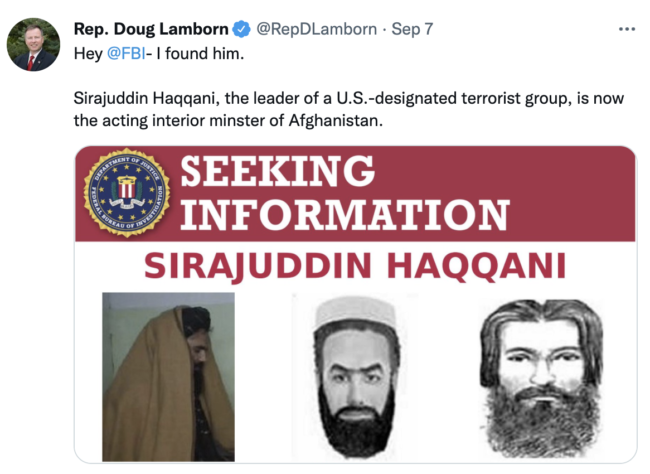 ► In which House Minority Leader Kevin McCarthy does his best O.J. Simpson impression. 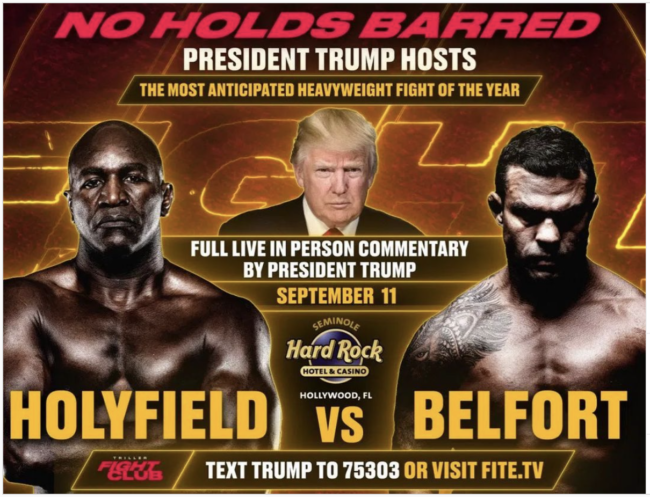 ► This is a real thing. As ESPN reports:

His son, Donald Trump Jr., will join him at the Hard Rock Hotel & Casino in Hollywood, Florida.

“I love great fighters and great fights,” Donald Trump Sr. said. “I look forward to seeing both this Saturday night and sharing my thoughts ringside. You won’t want to miss this special event.”

The Trumps will call the entire four-fight telecast that also includes Anderson Silva-Tito Ortiz and David Haye-Joe Fournier, according to Triller.

Money must be getting tight in Trumpland. The Trump’s aren’t even the main commentators for this nonsense boxing match (Holyfield is 58 YEARS OLD!!!).

► Congressperson Lauren “Q*Bert” Boebert is joining the parade of fellow right-wing Members of Congress who are threatening telecommunications companies over requests for information related to the January 6th insurrection.