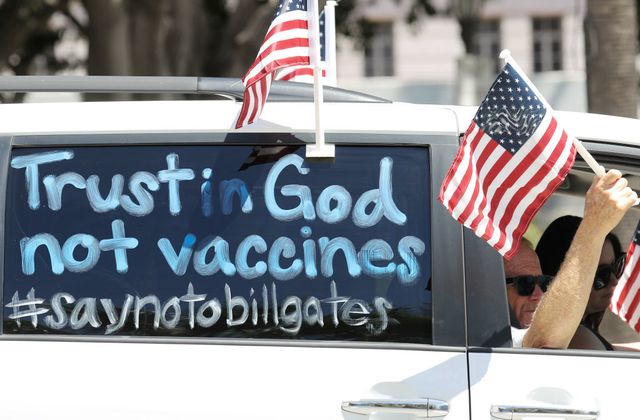 As the Denver Post’s John Aguilar reports, check out what eighteen months of misinformation and bad faith from one side of the aisle while a global pandemic raged has done for American society!

The head of Jefferson County Public Health pulled the agency’s three COVID-19 vaccination vans off the road over Labor Day weekend after nurses and medical staff administering shots to the public were jeered at and harassed by passersby.

JCPH Executive Director Dawn Comstock in an interview late Tuesday said that on Saturday, staff manning a mobile vaccine clinic in Gilpin County, which contracts with Jeffco for health services, were yelled at and threatened by passing motorists.

One driver, she said, ran over and destroyed temporary signs the clinic had put up around its vaccine tent. That same day, someone threw unidentified liquid at a public health nurse who was working a different mobile clinic stationed in front of a Jefferson County restaurant, Comstock said.

“Additional cars drove by screaming obscenities at vaccine staff and throwing garbage at them,” she said. “I will not put the hard-working public health staff in harm’s way.”

If you’re not totally incensed over some of our own neighbors harassing public health workers whose sole purpose in exposing themselves to such terrible behavior is trying to save lives in our community, then all we can say is that is a sad and ominous development for all of us. Americans today have easy access to vaccines literally billions of people across the world are dying for the want of, yet not only are millions of Americans convinced the vaccines (and for that matter, the pandemic) are a hoax, but some of them are driven by the overheated low-information rhetoric to do what we’re reading about today.

If you believe we as a community are better than this, it’s necessary to prove that. In this situation, that means not being intimidated by thugs, prosecuting said thugs, and maybe even some community support for mobile vaccine clinics instead of leaving them to be accosted.

And if you’re a Republican politician who has taken advantage of ignorance about COVID-19 and the vaccine over the last year and a half, you need to understand that this criminal behavior directed at public health workers is your responsibility. The people out there harassing health care workers at vaccine clinics aren’t likely to listen to mainstream media voices. It’s up to conservatives to speak out loudly against this before it gets any worse.

Or not. And that would be simply unforgivable.