Get More Smarter on Friday (September 3)

Enjoy the last big weekend of summer. Let’s Get More Smarter. If you think we missed something important, please include the link in the comments below (here’s a good example). If you are more of an audio learner, check out The Get More Smarter Podcast. And don’t forget to find us on Facebook and Twitter.

► Extended unemployment benefits for thousands of Coloradans will run out on Saturday, as CBS4 Denver reports:

Standard UI benefits are only available for 26 weeks. But with the pandemic came enhanced benefits, providing a temporary boost. That boost is over on Sept. 4.

Claimants on regular state unemployment will still receive their weekly benefits, but the extra $300 provided by Federal Pandemic Unemployment Compensation every week will end.

About 107,000 Coloradans had come to rely on those extended benefits, though some employers struggling to find workers have claimed that the benefits were preventing many people from applying for jobs. Research has shown that extended UI benefits had no impact on job growth.

As The New York Times explains, the real threat to the American economy is still the COVID-19 pandemic:

The American economy slowed abruptly last month, adding 235,000 jobs, a sharp drop from the huge gains recorded earlier in the summer and an indication that the Delta variant of the coronavirus is putting a damper on hiring.

The Labor Department report on Friday follows a sharp increase in coronavirus cases and deaths that has undermined hopes that restrictions on daily activities were nearing an end.

The unemployment rate was 5.2 percent, compared with 5.4 percent in July. Economists polled by Bloomberg has been looking for gain of 725,000 jobs.

Here in Colorado, the economy is stable enough that residents can actually expect the largest tax refunds in two decades. From The Denver Post:

The savings are split among three categories: a sales tax refund, a temporary cut to the state’s flat income tax rate (in this case, from 4.55% to 4.5%), and reimbursements to local governments.

For the sales tax refund, the average single filer is expected to get $69 on average, the state controller estimates, and joint filers on average should see refunds of $166. Those would be the largest TABOR refunds in 20 years.

► Republicans across the country are now facing the flip-side of the story related to the draconian new abortion ban in Texas. Republican candidates for 2022 and 2024 won’t be able to avoid answering questions about whether or not they support the Texas law, which is a particular problem in places (such as Colorado) where voters are overwhelmingly pro-choice. Here in Colorado, GOP U.S. Senate candidate Eli Bremer responded to an inquiry on the subject by saying that he “wasn’t comfortable” answering questions about the Texas law.

In related news, Denver7 reports on how the Texas abortion ban is likely to impact Colorado:

Already, Planned Parenthood in Texas is encouraging women to travel to Colorado and other surrounding states to have their abortions after six weeks. Colorado for Life exists to protect and defend every unborn life, which includes ending “abortion tourism” in Colorado.

Karen Middleton is the president of Cobalt, a pro-choice group, that, in part, helps women financially come from more conservative states to Colorado.

“We are already starting to get calls. What will happen is if they can’t get legal access to abortions in Texas, they will go to another state and legally access that elsewhere. Colorado’s doors are open,” Middleton said.

Upwards of 15% of the abortions in Colorado are for women coming from other states, according to Middleton. Many fly in to get the procedure and fly right back the same day.

► The all-Republican Mesa County Board of Commissioners allowed right-wing activist Sherronna Bishop to present her “proof” of 2020 election fraud this week. Bishop, who was Lauren “Q*Bert” Boebert’s campaign manager in 2020, sat down in front of the Mesa County Commissioners and offered ABSOLUTELY NOTHING that would even begin to corroborate her election fraud clams.

► As Charles Ashby reports for The Grand Junction Daily Sentinel, Mesa County Clerk Tina Peters is insisting that she is doing her job remotely…from wherever she is at the moment:

There is nothing wrong with working remotely, whether it’s from her home office or at some undisclosed location in the nation, according to an email Mesa County Clerk Tina Peters sent to several county officials Wednesday evening.

In a response to the Mesa County Attorney’s Office over a Colorado Open Records Act request from a county resident, Peters scolded Commissioners Janet Rowland and Scott McInnis for implying that she’s not doing her job.

“For the others copied in to this email, I am working starting at 7 a.m. everyday with stand ups and direction for my staff as well as during the day,” Peters wrote. “Regarding the ‘rudderless’ office Scott has asserted, and me being accused by Janet of being ‘MIA,’ I can assure everyone, that is not the case.”

You’ll forgive us if we aren’t inclined to take the word of someone who is hiding out in an unknown location and is currently under investigation by the Colorado Secretary of State’s office, the Mesa County District Attorney, the Colorado Attorney General’s office, and the FBI.

► New polling data from ABC News/Washington Post shows that Americans overwhelmingly support the decision to remove U.S. forces from Afghanistan…but respondents generally disapprove of the way the withdrawal was handled: 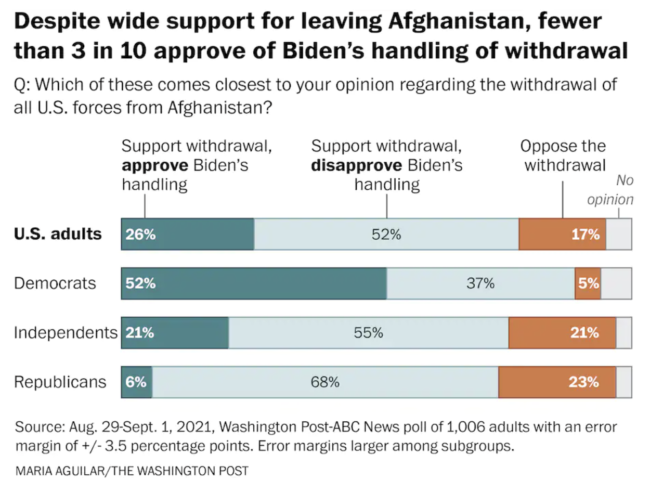 In related news, members of Colorado’s Congressional delegation are among those pushing for an investigation into the chaotic withdrawal of U.S. forces from Afghanistan.

► The House commission investigating the January 6th insurrection wants to see email and phone records for certain Members of Congress as part of efforts to determine what, if any, coordination was conducted in advance of the storming of the Capitol. Republicans such as House Minority Leader Kevin McCarthy and Georgia Rep. Marjorie Taylor Greene are making specious threats about shutting down telecommunications companies that cooperate with requests from the select committee. This isn’t at all suspicious.

► Here’s another example of how donations to Donald Trump’s Make America Great Again PAC end up being funneled right back into Trump’s pockets.

► Colorado Newsline reports on the status of Congressional legislation to fund climate and environmental policies, including a “performative obstruction” performance from Rep. Lauren “Q*Bert” Boebert (R-ifle):

The House Natural Resources Committee on Thursday inched toward approval of a $30 billion bill to fund climate, tribal and environmental programs.

…The largest single piece of the bill would spend $3.5 billion to create a Civilian Climate Corps, a long-standing priority of U.S. Rep. Joe Neguse (D-Colo.) meant to put thousands of mostly young people to work on tasks that address the climate crisis. The funding would be split between the National Park Service, Bureau of Land Management, Fish and Wildlife Service and Native American lands…

…Several Republicans on the panel opposed the language creating the climate corps, saying it would create more federal bureaucracy but not necessarily make any difference in meeting climate goals, and that a jobs program was unneeded when many businesses are looking for workers. U.S. Rep. Lauren Boebert (R-Colo.) offered an amendment to remove the corps provisions from the bill. [Pols emphasis]

Neguse objected to the amendment, calling the program a necessary response to the climate crisis that will train future stewards of the nation’s public lands.

► Former Colorado Senator and Interior Secretary Ken Salazar was formally sworn-in as the U.S. Ambassador to Mexico on Thursday.

► The Colorado Sun summarizes the big themes that have emerged in recent meetings about redistricting in Colorado.

► The Denver Post explains what you’ll be voting for (or against) on the November ballot.

► California Gov. Gavin Newsom is making his closing argument to voters on the last weekend before a statewide recall election.

► Ernest Luning of the publication formerly known as the Colorado Statesman reports on a recent Denver court ruling that could be a significant step in slowing down the filing of fraudulent ethics complaints.

► As Michael Gerson writes for The Washington Post, House Minority Leader Kevin McCarthy is itching to become the new face of nonsense for the Republican Party:

McCarthy’s threat that Republicans “will not forget” if telecommunications companies comply with requests for email and phone records by the Jan. 6 committee marks a coming out of sorts.

For years, McCarthy (R-Calif.) has been former president Donald Trump’s factotum — a groveler and sniveler, held in obvious contempt by the object of his loyalty. You can usually identify the minority leader in a picture by his hunted expression.

But now McCarthy is emerging as a demagogue in his own right. His obstruction of a congressional inquiry is probably a violation of House ethics rules, and maybe even a violation of federal law. But that is presumably the point: McCarthy wants to show his chest hair and spitting skills in a party where toxic masculinity has become the dominant political philosophy.

It is possible, even probable, that the minority leader is also hiding something — either in his own conduct during the Jan. 6 attack on the Capitol, or in the conduct of his caucus. But in his chosen response, McCarthy has fully adopted the MAGA conception of governing as gangsterism.

With the notable exception of the Senate minority leader, Mitch McConnell (R-Ky.), the GOP’s national leadership has now enthusiastically embraced as its platform the lawless pursuit and exercise of power. This creates a predictable cascade of further problems as the right’s entire ideological spectrum becomes red-shifted.

► Public health officials in Colorado say an increasing number of serious COVID-19 cases are being seen in children. Meanwhile, Boulder County is reinstituting an indoor mask requirement in an effort to slow down the COVID-19 virus.

But seriously…why are the McDonald’s ice cream machines ALWAYS broken? President Biden isn’t actually spending time worrying about this, despite what Boebert claims, but it is a true American mystery. 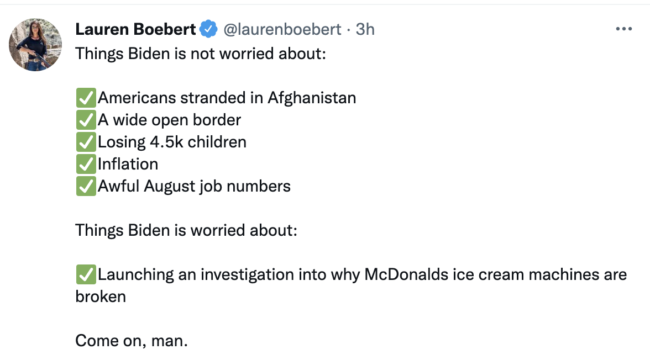 ► Congressman Doug Lamborn (R-Colorado Springs) wants to prioritize banning the teaching of “Critical Race Theory” as a condition of his support for the National Defense Authorization Act (NDAA), the annual military spending bill that must be approved by Congress. Lamborn is always on top of the most important issues.

► Colorado Mesa University is located in the COVID-19 hotbed of Grand Junction, but the school is actually relaxing its COVID-19 health policies because…freedumb, or something.

► Elections matter, and despite what many Republicans and media outlets said for years, there was ALWAYS a looming threat to abortion rights.

► Mesa County Deputy Clerk Belinda Knisley was at one point considered to be a potential successor to current Mesa County Clerk Tina Peters. Knisley’s next office, however, might be inside a jail cell.