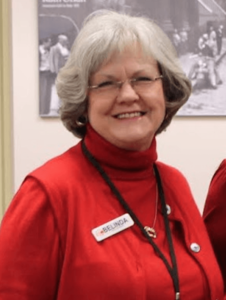 As the Grand Junction Sentinel’s Charles Ashby reports, while the criminal investigation into Mesa County Clerk Tina Peters proceeds over a breach of election system security in her office, Mesa County’s Deputy Clerk Belinda Knisley finds herself in a potentially felonious pickle all her own:

To avoid being arrested and put in jail, Mesa County Deputy Clerk Belinda Knisley turned herself in to Mesa County District Court today and was advised on charges of felony burglary and misdemeanor cyber crimes filed against her in relation to a personnel matter and ongoing investigations of her office.

As a result, Knisley, 66, was ordered not to enter the Mesa County Clerk and Recorder’s Office while state and federal criminal investigations are ongoing into possible felony charges for breaching election security, according to her arrest warrant.

The charges are separate from two criminal investigations against her and Mesa County Clerk Tina Peters by the district attorney’s office and the Federal Bureau of Investigation.

Deputy Clerk Knisley reportedly disregarded instructions to stay away from the office after being placed on administrative leave, and has since behaved “in a manner that is intimidating” to other county employees. Clerk Peters, of course, is taking…unscheduled leave on her own authority while the FBI and DA investigations into the election system breach in her office continue. Knisley was allegedly caught trying to access county computers using Clerk Tina Peters’ passwords after Knisley’s own credentials had been revoked.

In other words, the usual security policy at the Mesa County Clerk’s office! We can’t say it’s exactly surprising to learn that Colorado’s least secure county clerk’s office is also a toxic work environment, since a general state of unhinged incompetence like Clerk Peters appears to have cultivated in Mesa County tends to bring out the worst in people. But these charges aren’t the end of Deputy Clerk Knisley’s problems, being hip-deep in the larger data breach scandal:

The text of the Secretary of State’s lawsuit against Mesa County Clerk Tina Peters (pdf) essentially says Deputy Clerk and Recorder Belinda Knisley lied to State employees with Tina Peters’ knowledge when she told them a non-employee County Elections staff allowed to access voting equipment last May was a County employee, when in fact he was not, and had never been a County employee. Knisley, described in the suit as a “possible successor” to Tina Peters in the Elections Department, is specifically named as a Respondent in the suit in addition to Peters.

Call it a delicious appetizer for the main course yet to be served.