Get More Smarter on Friday (August 27) 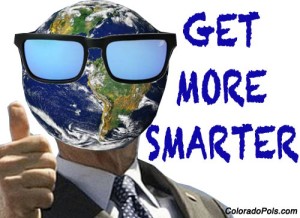 We’re almost three-quarters of the way through 2021. Let’s Get More Smarter. If you think we missed something important, please include the link in the comments below (here’s a good example). If you are more of an audio learner, check out The Get More Smarter Podcast. And don’t forget to find us on Facebook and Twitter.

► One day after a bombing at an airport in Afghanistan that claimed the lives of 13 U.S. service members, Marine Gen. Kenneth “Frank” McKenzie, head of U.S. Central Command, indicated that more attacks are expected to come from “ISIS-K.” The New York Times explains everything you need to know about “ISIS-K,” the different flavor of ISIS that is responsible for the attack in Kabul.

On Thursday, President Biden promised that the U.S. would retaliate against ISIS-K for the suicide bombing attack that killed more than 100 people in total. From The Washington Post:

In emotional comments at the White House, Biden made clear that the attack would not cause him to rethink his strategy. Rather, he said, it reinforced his belief that the war must end and that the evacuation must proceed. He framed the deaths as the sacrifice of heroes performing a noble mission, and he suggested that any move to cut short the evacuation of Americans and their Afghan supporters would amount to caving to the terrorists.

“I bear responsibility for, fundamentally, all that has happened,” Biden said, addressing the nation hours after the deadly attack. His voice broke as he invoked Scripture, history and personal loss to decry the double suicide bombing at the entrance to the Kabul airport, which stands as the last small acreage controlled by the United States in Afghanistan nearly 20 years after the war began.

Biden promised to track down the killers responsible for the massacre, who he suggested were members of the terrorist group ISIS-K. “To those who carried out this attack: We will not forgive,” he said. “We will not forget. We will hunt you down and make you pay.”

► Congressman Jason Crow (D-Aurora) addressed Thursday’s attack in Kabul in an interview with MSNBC. The former Army Ranger who served in Afghanistan reaffirmed his belief that the withdrawal of U.S. forces was the correct decision, but stressed that the U.S. must remember its obligation to Afghanistan allies.

► As The Associated Press reports, the U.S. Supreme court ruled that evictions may resume in this country after a long COVID-related moratorium.

In related news, Federal Reserve Chairman Jerome Powell indicated that it might be time to start thinking about scaling back stimulus efforts as the economy continues to show signs of improvement even amidst another surge of COVID-19 cases.

► As The Colorado Sun reports in its “Unaffiliated” newsletter, the Vice Chair of the Colorado Republican Party, Priscilla Rahn, has come out in support of efforts to cancel the GOP Primary Elections in order to help ensure that only the most strident right-wing candidates can win the Republican nomination for basically every elected office. This is a terrible idea for Republicans that is opposed by many moderates, but supporters such as Rahn believe that the only way forward for the GOP is to lurch ever rightward.

►  The Denver Post asks the same question that has been top of mind for many Colorado politicos lately: WHERE IS TINA PETERS?

The Mesa County Clerk and Recorder has been hiding in an undisclosed location for weeks since being investigated for helping to break in to election computers in order to prove some sort of cockamamie argument about 2020 election fraud. Peters and her supporters have insisted that she is on the lam because of concerns for her personal safety, but a recent review of emails received by the Mesa Clerk’s office indicates that this is complete nonsense.

► Supreme Court Justice Stephen Breyer says he is still considering retiring from the highest court in the land. As POLITICO reports:

In an interview with the New York Times timed to the release of his forthcoming book, Breyer indicated he is still weighing his decision.

“There are a lot of blurred things there, and there are many considerations,” he told the Times’ Adam Liptak. “They form a whole. I’ll make a decision.”

Still, Breyer, who was nominated to the high court by President Bill Clinton in 1994, gave some indications that he is mindful of the dynamics looming over his potential retirement. He cited the late Justice Antonin Scalia, whom he served on the court with, as saying he didn’t want his legacy on the court washed away by an ideologically opposed successor.

“He said, ‘I don’t want somebody appointed who will just reverse everything I’ve done for the last 25 years,’” Breyer said in the interview, which was conducted Thursday.

Breyer also signaled that he did not want to follow in the path of Scalia or Justice Ruth Bader Ginsburg, both of whom died while serving on the Supreme Court in recent years. Those vacancies immediately became bitter political battles that were ultimately won by Republicans and shifted the ideological balance of the court to the right.

► The Denver Post has more on legislation sponsored by Rep. Joe Neguse (D-Boulderish) seeking to close a loophole related to background checks for guns:

A Colorado congressman wants to close the loophole in the federal gun background check system that allowed 18-year-old Sol Pais in 2019 to purchase a shotgun in Littleton, prompting panic and school closures because authorities feared her obsession with the 1999 Columbine shooting would prompt her to commit similar violence.

The bill introduced Wednesday by Rep. Joe Neguse, a Lafayette Democrat, would update the National Instant Criminal Background Check System so that it checks potential gun buyers’ eligibility in their home states as well as their eligibility in the state where they are purchasing the gun. Pais was eligible to purchase the shotgun in Colorado but would not be eligible for the same purchase in her home state of Florida, which bans gun sales to anyone under age 21.

The Secure Background Checks Act would add state-level age requirements to the federal background check so that underage would-be gun buyers can’t simply travel to another state to buy a gun they are prohibited from buying in their home state.

► The Pueblo Chieftain follows up on calls for Rep. Lauren “Q*Bert” Boebert to release tax returns explaining details about her recent revelation that husband Jayson Boebert made a million dollars in the last two years from a previously-undisclosed “consulting” deal with an oil and gas company.

► The tab for the newish VA hospital in Aurora has surpassed $2 billion, making the facility one of the costliest health care facilities IN THE WORLD.

► A statewide proposal seeking to lower property taxes in Colorado has qualified for the November ballot.

► A prominent Denver-area Republican group is refusing to remove a Facebook post praising the Proud Boys and QAnon.

► CBS4 Denver reports on local plans for recognizing the 20th anniversary of the 9/11 attacks.

► The number of hospitalizations related to COVID-19 continues to rise in Colorado.

Meanwhile, Westword reports that more than 20 Douglas County schools could be home to significant outbreaks of COVID-19.

► Axios Denver catches you up on the Colorado State Fair, which you may or may not have remembered is currently taking place in Pueblo.

► The Denver Post reports on plans to distribute $400 million from Colorado’s piece of a settlement with opioid manufacturers.

► In an update that should surprise absolutely nobody, new testing shows elevated levels of air pollution near the Suncor oil refinery in Commerce City.

► Fox 31 Denver prepares you for a new traction requirement for drivers on I-70 that takes effect on Sept. 1.

► Colorado is apparently home to one of the largest wealth gaps in the entire country. 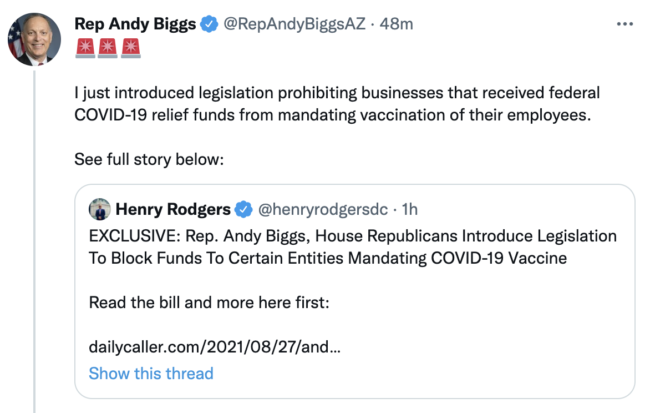 ► Very classy: Rep. Lauren “Q*Bert” Boebert is using the death of 13 U.S. service members in Afghanistan AS A FUNDRAISING TOOL: 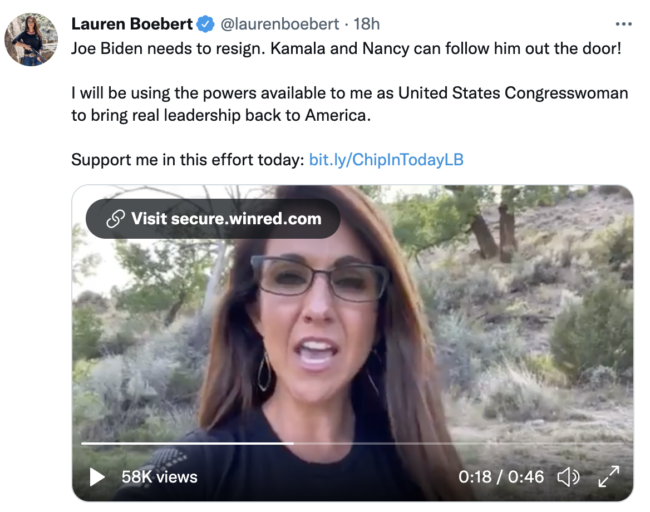 ► It’s becoming harder to argue otherwise: For many Republican politicians, cruelty IS the point.

► You DO NOT have a “constitutional right” to refuse the COVID-19 vaccine.

► Many Republican leaders have backed themselves into a corner on the issue of mandatory COVID-19 vaccines as businesses across the country push requirements for employees.

► Recent polling suggests that “The Democratic Party” is a stronger brand than the “Liberal” or “Progressive” monikers.