Get More Smarter on Tuesday (August 17)

Happy birthday to you if your birthday is today. Let’s Get More Smarter. If you think we missed something important, please include the link in the comments below (here’s a good example). If you are more of an audio learner, check out The Get More Smarter Podcast. And don’t forget to find us on Facebook and Twitter.

► The big political news continues to revolve around the withdrawal of American troops from Afghanistan and the swift takeover of that country by the Taliban. While the Taliban takeover was not unexpected, it did happen quicker than many analysts had suggested.

Congressman Jason Crow (D-Aurora), a former Army Ranger who served two tours in Afghanistan, was among those on Monday who were critical about the process of withdrawal. As The Denver Post reports:

“I’m not going to mince my words on this: We didn’t need to be in this position,” the Centennial Democrat said during a news conference. “We didn’t need to be seeing the scenes we’re seeing at Kabul’s airport with our Afghan friends climbing aboard C-17s.”

“We should have started this evacuation months ago,” Crow added. “Had we done that, tens of thousands of folks could have been brought to safety. It could have been done deliberately and methodically. That was a missed opportunity.”

The collapse of Afghanistan’s government over the weekend has left tens of thousands Afghans who translated for or otherwise helped U.S. soldiers desperate for a way out of the country. Those who remain fear they will be killed by the Taliban, a terror group that controls the country.

Compared to Crow’s criticism of the process of the American withdrawal in Afghanistan, other Colorado Republicans have been busy doing their best to blame the very idea of withdrawal on President Biden — nevermind that this contradicts everything they themselves have said in the previous couple of months.

Denver7 provides a list of resources for military veterans and families impacted by the unfolding situation in Afghanistan.

► If there is a “deep end” to be found in the rhetoric about Afghanistan, you’ll find Rep. Lauren “Q*Bert” Boebert (R-ifle) frantically trying to be the first to reach the very bottom.

► Were it not for the situation in Afghanistan, the big story today would be news that the federal government is for the first time requiring mandatory water reductions for some users of the Colorado River. Arizona will be hit hardest, losing 18% of its allocation of Colorado River water beginning in early 2022.

As Colorado Public Radio explains, Monday’s decision comes at the same time that Gov. Jared Polis and other Western Governors are asking the Biden administration for additional federal resources because of severe drought in 99% of western states.

9News tries to keep up with the various mask requirements for school districts across the state.

► Mesa County Clerk Tina Peters had better find herself one hell of a lawyer:

.@MesaCountyClerk Tina Peters and 2 others entered the elections office late at night in May to make copies of election computer hard drives, the @COSecofState told @DailySentinelGJ in an exclusive. #copolitics #MesaCounty https://t.co/OOYDaV8STs

► As Colorado Newsline reports, a top civil rights official in the Department of Justice is encouraging Congress to move swiftly on protecting voting rights in the United States.

► Senator Michael Bennet is talking up the “once-in-a-generation” opportunity to make major infrastructure improvements in Colorado and throughout the United States.

► Kudos to Colorado native Laura Richardson, who is the second female combatant commander in U.S. Army history. Richardson is being promoted to a four-star general and will assume direction of U.S. Southern Command (Central and South America and nearby areas).

► The Colorado Sun provides a detailed update on the redistricting process in Colorado, including a recent decision to NOT move forward with so-called “prisoner reallocation,” which would have counted inmates in Colorado prisons based on where they are from, and not the location of the penitentiary in which they currently reside.

► Alex Burness of The Denver Post has more on the latest terrible idea from Colorado Republicans:

The Colorado Republican Party is split into two informal factions — Donald Trump loyalists who want to move the party as far right as possible, and everyone else. Now the former group is hoping to create more ideal conditions for far-right candidates to be nominated for office, and its plan could affect millions of voters.

The idea is to get rid of open primaries, removing unaffiliated voters and all but a few thousand Republicans from having any say over which candidates the party nominates for federal offices, the governorship, other statewide offices and seats in the state House and Senate.

Colorado primaries have been open on both sides of the aisle — that is, independent voters receive Democrat and Republican primary ballots and can choose which one to fill out — since voters approved that program via twin ballot measures in 2016.

The fine print of the 2016 ballot proposals left the option to close primaries in the event that 75% of a party’s central committee is so moved. So, on Sept. 18, the state GOP’s central committee will decide on whether to choose candidates through an assembly process that fewer than 1% of party voters participate in.

As readers of Colorado Pols know well, nominating the most right-wing candidate as the Republican Party nominee almost always ends up handing the General Election to a Democrat.

► The Colorado Times Recorder looks at who did, and did not, attend this month’s El Paso County GOP fundraising dinner featuring guest speaker Rep. Marjorie Taylor Greene of Georgia.

► COVID-19 hospitalizations in Colorado have reached their highest point since mid-May. Meanwhile, the federal government will apparently soon recommend a third dose of the COVID-19 vaccine. As The Washington Post explains:

The Biden administration is planning to announce that most Americans who have received the coronavirus vaccine will need booster shots to combat waning immunity and the highly transmissible delta variant that is sparking a surge in covid-19 cases, according to four people familiar with the decision.

The administration’s health and science experts are coalescing around the view that people will need the boosters eight months after being fully vaccinated, according to the people, who spoke on the condition of anonymity to discuss a decision not yet public. The move is likely to be announced as soon as this week.

Administration of boosters would not occur until mid- or late September, after an application from Pfizer-BioNTech for the additional shots is cleared by the Food and Drug Administration, the individuals said.

► The Aurora City Council is sifting through a massive report on how to best reform the Aurora Police Department.

► POLITICO looks at how and why Afghan security forces were persuaded to lay down their arms rather than fight the Taliban.

► As Vox.com explains, Facebook has a huge vaccine misinformation problem…perhaps bigger than anyone can even measure. 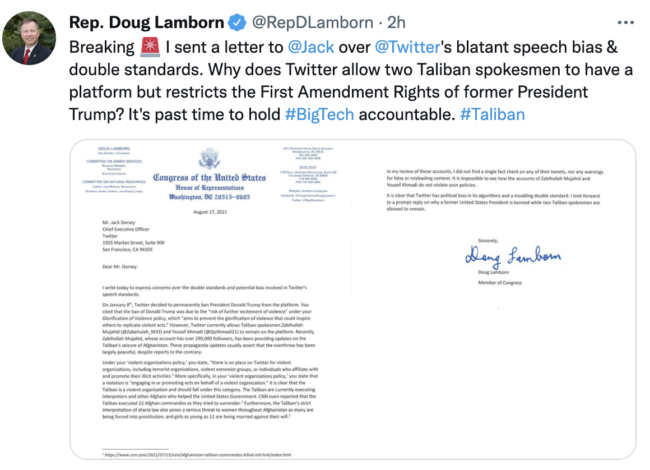 ► The “MyPillow Guy,” Mike Lindell, is shifting his focus to a confrontation with Fox News after last week’s disastrous attempt to demonstrate actual voter fraud in 2020.

► More details are emerging about a lawsuit against Rep. Doug Lamborn (R-Colorado Springs) filed by a former staffer alleging all manner of improprieties. The latest news is that Lamborn apparently believed that the COVID-19 outbreak was an intentional act by (Italians/Chinese/Space Aliens?) to stop the re-election of Donald Trump in 2020.