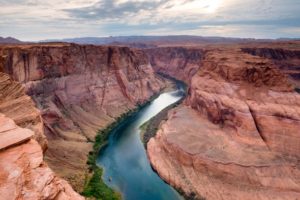 The Colorado River, or what it’s SUPPOSED to look like.

CNN reports today on a story that won’t get as many headlines as Afghanistan but is still a REALLY BIG DEAL:

The federal government on Monday declared a water shortage on the Colorado River for the first time, triggering mandatory water consumption cuts for states in the Southwest, as climate change-fueled drought pushes the level in Lake Mead to unprecedented lows.

Lake Mead, the largest reservoir in the US by volume, has drained at an alarming rate this year. At around 1,067 feet above sea level and 35% full, the Colorado River reservoir is at its lowest since the lake was filled after the Hoover Dam was completed in the 1930s.

Lake Powell, which is also fed by the Colorado River and is the country’s second-largest reservoir, recently sank to a record low and is now 32% full.

CNBC has more on the specific cuts:

Water cuts will go into effect in January for Arizona, Nevada and Mexico, the Bureau of Reclamation said Monday. Arizona will take the biggest hit, with about 18% of the state’s annual apportionment cut.

The Colorado River supplies water and power for more than 40 million people across the West, while also fueling some 2.5 million acres of croplands. Among the cities it supplies is Phoenix, which was the fastest-growing city in the U.S. in the last decade, according to the Arizona Republic, and is now the fifth-largest city in the country.

In related news, Gov. Jared Polis and Western Governors sent a letter to the Biden Administration requesting that President Biden declare a FEMA drought disaster in western states. Roughly 99% of the western United States is under declared drought conditions. Colorado, Utah, Oregon, and Idaho are requesting additional federal money to help farmers across the region.