Get More Smarter on Thursday (July 8)

It’s really hot today. It’s going to be really hot tomorrow, too. Don’t skimp on the sunscreen. Let’s Get More Smarter; if you think we missed something important, please include the link in the comments below (here’s a good example). If you are more of an audio learner, check out The Get More Smarter Podcast. And don’t forget to find us on Facebook and Twitter.

► Western Colorado is very dry and in significant danger of suffering serious wildfires. As Colorado Public Radio reports, the federal government is trying to help:

There’s a confluence of events happening in the West this summer: extreme heat, extreme drought and the possibility of another record-breaking wildfire season, all driven by a long-term drying trend worsened by climate change. It’s so serious that President Joe Biden convened a meeting last week with Western governors to talk about wildfire preparedness and response.

“This is an area that has been under-resourced. But that’s going to change, if we have anything to do with it,” Biden said. “We can’t cut corners when it comes to managing our wildfires or supporting our firefighters.”

Members of Colorado’s Congressional delegation have their own ideas for how to deal with the twin problems of drought and wildfires.

[Cattle rancher Mark] Roeber says he’s talked to Democratic Sens. Michael Bennet and John Hickenlooper, as well as his local representative, Republican Lauren Boebert, about the need for financial assistance for the ag industry, in particular flexibility in some existing programs, as well as better water efficiency policies and water infrastructure — from storage to piping.

Boebert backs increasing water storage capacity, something she hit on during a recent hearing.

“I support efforts to streamline cumbersome and bureaucratic policies in order to allow the construction of new water storage projects,” she said.

Boebert sits on a water subcommittee in the House, but when it held a public hearing on the subject, she did not ask any drought-related questions. Instead, she focused on potential conflicts of interest by Elizabeth Klein, the Interior official testifying at the hearing.

As CPR notes, supporting more water storage isn’t an idea that’s going to do much to help with severe drought conditions NOW.

► Congressman Ken Buck (R-Greeley) is worried enough about a potential Republican Primary opponent that he’s gone full “election truther.” Buck is spinning a strange tale about Google somehow manipulating search engine results to allow Democrat Joe Biden to defeat Republican Donald Trump, or something like that. This doesn’t make a lot of sense, but then, that isn’t the point, is it?

► The Denver Post reports on a law signed by Gov. Jared Polis — inspired by the death of Elijah McClain in Aurora — that restricts the use of ketamine by first responders.

In related news, a Colorado mother of four is the final winner of a $1 million lottery for receiving her COVID-19 vaccination.

► Bumbling right-wing talk show host Dan Caplis might want to run for U.S. Senate in 2022, so he’s looking around for Trumpian wackos to embrace.

► A school district in Colorado Springs is looking to become the first in the state to pre-emptively ban the teaching of “Critical Race Theory.” CNN has more on the completely manufactured outrage about something that isn’t even being taught in schools.

► The man known as the “Q-Anon Shaman,” one of hundreds of people charged with a crime for taking part in the January 6 insurrection, is undergoing mental competency testing at a federal prison in Southwest Denver.

► Donald Trump continues to gouge taxpayers for rooms required by the Secret Service as part of his post-administration protective detail.

► As CNN reports, a slew of Congressional candidates across the country have launched campaigns despite having no idea what their district might actually look like:

Loretta Smith and Wesley Hunt are members of different parties, separated by both distance and policy.

And yet, Smith, an Oregon Democrat, and Hunt, a Texas Republican, find themselves in similar positions headed into the 2022 midterms: Both have announced plans to run for Congress, but neither know what the district they plan to run in will look like.

Smith and Hunt are among a growing group of politicians from both parties who, because of a delayed release of the district-level data from the 2020 US Census needed for each state to complete the redistricting process, have announced congressional bids without knowing which district they will be running in. The delay has created a unique set of announcements across the country, with people like Hunt announcing the area they plan to represent, but not the district or opponent they could face. Although many politicians are impacted by this delay, the feeling is particularly acute for first-time candidates and those challenging incumbents.

► POLITICO looks at whether Eric Adams, the former police officer who is likely to become the next Mayor of New York City, could provide a campaign blueprint for certain Democrats around the country:

The theory that moderates are the future of the Democratic Party will be tested soon both in the midterm congressional elections and mayoral races from Seattle to Boston where the dynamics that drove New York City’s race will play out amid a national surge in gun violence and local economies sputtering toward recovery.

Adams ran as a moderate and the central argument of his campaign was that he’s uniquely positioned to balance police reform while reversing a surge in crime. He excoriated rivals to the left he deemed “fancy candidates” for tiptoeing around gun violence with academic and untried solutions. It proved a winning message in one of the most liberal cities in America where self-styled progressive Bill de Blasio has been mayor for nearly eight years.

► Colorado is cracking down on off-shore tax havens and giving Coloradans more of a choice in deciding how their online data is tracked.

► Spectators will be barred from attending the Summer Olympics in Tokyo because of an outbreak of COVID-19.

Mesa County in Colorado is one of the hardest-hit areas of the state for COVID-19 infections with the rise of the “Delta Variant.” Congressperson Lauren “Q*Bert” Boebert is more interested in firing off Tweets than on dealing with the issue: 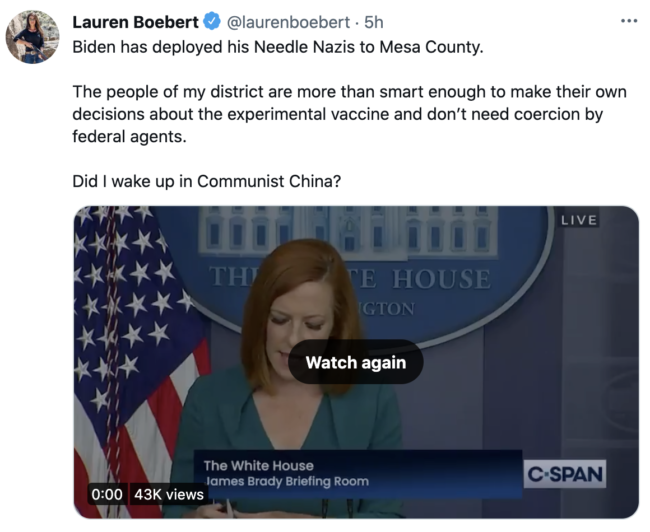 Kinda wild that Juvenile is doing more to save lives right now than every single House Republican pic.twitter.com/37tK968JCc

If you haven’t had a chance to watch the video for “Vaxx That Thang Up,” stop what you’re doing and check this out:

► If you are regularly confused by the Twitter rants of Rep. Lauren “Q*Bert” Boebert, just know that you are not alone.

Also, you know you’ve gone too far when even Marianne Williamson can’t follow your logic.

► At least one-third of the 700 Republican candidates who have filed to run for Congress in 2022 have directly agreed with The Big Lie that the 2020 election was stolen from President Trump.

► Check out the latest episode of The Get More Smarter Podcast, featuring an interview with Jon Murray of The Denver Post about his big profile story on the Libertarian Party and its Colorado founding: