A Tale Of Two Headlines: When Somebody Is BSing You

The release over the past week of preliminary draft redistricting maps for Colorado’s congressional, state legislative, and state senate districts ahead of a summer of hearings by the state’s new independent redistricting commissions has produced a huge volume of speculation of…varying quality, which we in this space have tried hard to avoid, recognizing as the commission’s staff took pains to remind anxious politicos that these are mere starting points for the discussion that will produce the actual maps we’ll live and die by in Colorado politics for the next decade. Colorado’s oft-second-guessed attempt to de-politicize the redistricting process in 2018 with the passage of Amendments Y & Z will now face its ultimate test, and rather than stepping on the established process we’re watching to see how it unfolds.

While enforcing this temporary neutrality, however, we are allowed to take note when local mainstream media outlets commit to analysis of these preliminary maps. This is especially true when, as is the case between the Denver Post and Denver Gazette’s headlines on the new state legislative maps today, somebody must by definition be wrong: 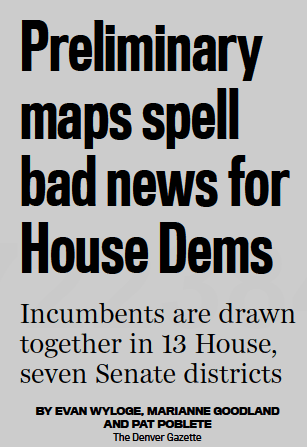 As you can see, the Denver Post’s analysis concludes that the preliminary redistricting map “keeps Statehouse Dems in control,” while the Gazette claims the exact same preliminary proposed map “spell bad news for House Dems!” It’s not often that two pieces of hard news analysis come to such diametrically opposite conclusions about the same subject matter, but here’s an example of exactly that. There are lots of ways to evaluate this conflict, taking into account for example the perceived biases of the two outlets, in which the Gazette is by the House GOP Minority’s own estimate the more “GOP friendly” of the two.

For ourselves, we’re stopping at the word “preliminary” and that’s where we still advise all of you to hold up too. There’s just no reason to get worked up about maps that are not intended to be final, and it’s the hearings and commission work ahead that will make all the difference–making knee-jerk speculation over these preliminary drafts not only needless but actually harmful to the process.

While the commission does its work, our best advice is don’t believe the hype either way. Instead, get involved in the process–and when the time comes to put your desired spin on the final map, you’ll know what to say.

And with that, we’ll let our readers fight this one out.