Get More Smarter on Wednesday (June 30)

Peace out, June. Let’s Get More Smarter; if you think we missed something important, please include the link in the comments below (here’s a good example). If you are more of an audio learner, check out The Get More Smarter Podcast. And don’t forget to find us on Facebook and Twitter.

► We’re not done with the coronavirus just yet, friends. As The Washington Post reports:

Los Angeles County public health authorities are urging unvaccinated and vaccinated people alike to don masks again inside restaurants, stores and other public indoor spaces because of the growing threat posed by the more contagious delta variant of the novel coronavirus.

The high-profile move by the county of 10 million marks an abrupt shift in tone after states and localities have dropped most mask mandates and social distancing requirements in recent weeks. The Centers for Disease Control and Prevention in mid-May rescinded almost all masking recommendations for fully vaccinated people.

But the Los Angeles County Department of Public Health cited a growing share of new cases linked to the delta variant, which was first detected during India’s catastrophic surge of infections and has upended reopening plans across the globe, in “strongly recommending” a return to masking. Los Angeles dropped its mask mandate for vaccinated people with the rest of California on June 15, with limited exceptions for public transportation, hospitals and schools.

Here in Colorado, 35 counties are still below a vaccination rate of 50%. Axios looks at how Colorado is adjusting its vaccination rollout.

President Joe Biden will announce measures to expand the federal government’s wildfire response and mitigation efforts and increase pay for wildland firefighters during a meeting with Western governors and Cabinet officials on Wednesday, a senior administration official said.

Fueled by climate change, extreme heat and drought across much of the West have led to a highly active start to the 2021 wildfire season, with more than 1 million acres already burned across 12 states, according to the National Interagency Fire Center. In Arizona, the Telegraph Fire has burned more than 193,000 acres since igniting on June 4, while officials in northern California on Tuesday issued evacuation orders amid the rapid growth of several fires in the Mount Shasta area.

Biden will meet virtually on Wednesday with governors from Western states, who are gathering for the annual meeting of the bipartisan Western Governors’ Association, based in Denver. He is expected to announce a series of actions aimed at expanding the Federal Emergency Management Agency’s wildfire response capabilities, as well as “critical new investments” in federal grant programs that help communities mitigate fire risks, a senior administration official said in a call with reporters Tuesday.

► Multiple news outlets are reporting that the Trump organization will be charged with tax-related crimes as soon as this week. From The Huffington Post:

News of the looming criminal charges, reported by NBC News and The Wall Street Journal, come after prosecutors reportedly gave former President Donald Trump’s attorneys until this past Monday to convince them not to file the charges over the company’s financial dealings.

It has been previously reported that the investigation relates to non-monetary corporate perks and gifts awarded to the company’s longtime chief financial officer, Allen Weisselberg. The WSJ and The Associated Press reported he is also expected to be charged.

► Nonpartisan staff from Colorado’s Independent Legislative Redistricting Commission released a PRELIMINARY set of maps for redrawing State House and Senate districts. Justin Wingerter of The Denver Post has more on the map release, including this very important quote:

The proposed maps are only preliminary and are certain to change.

“These will never be approved by anyone,” Jessika Shipley, the legislative redistricting commission’s staff director, told commissioners. “They are merely a baseline starting point for conversations across the state.”

► The New York Times published an exhaustive look into the January 6 insurrection at the U.S. Capitol.

► The Colorado State Patrol and AAA Colorado are working together to provide anti-vehicle theft devices to Coloradans. From a press release:

Amid a staggering surge in automotive theft and related crimes, AAA Colorado will join with the Colorado State Patrol, the Colorado Auto Theft Prevention Authority, the Colorado Department of Public Health & Environment, the City of Sheridan Police Department, and other key law enforcement partners to roll out free, effective devices for Coloradans to protect their cars. This is the first anti-theft partnership of its kind in the United States.

In related news, gas prices are rising in Colorado and some shortages are expected, but it has nothing to do with a lack of supply. Skyler McKinley of AAA Colorado calls it “COVID-19 weirdness.”

► Governor Jared Polis signed legislation that is intended to provide residents with more information about local metro districts, which are prevalent in Colorado.

The publication formerly known as the Colorado Statesman has more on some other bills signed into law by Polis. 9News focuses its attention on new laws affecting agricultural workers.

► Congressman Ed Perlmutter (D-Jefferson County) will chair a hearing today on the connection between climate change and economic disruptions. From a press release:

On June 30th, U.S. Rep. Ed Perlmutter (CO-07), Chair of the Subcommittee on Consumer Protection and Financial Institutions, will hold a hearing entitled, “Addressing Climate as a Systemic Risk: The Need to Build Resilience within Our Banking and Financial System”. This hearing will explore recent developments and current legislative proposals to identify and mitigate climate risks that affect the U.S. financial system. The hearing comes on the heels of Perlmutter’s recent introduction of the Green Neighborhoods Act – a bill aimed at making the housing sector more energy efficient and ensuring workers can get trained for green jobs. This is one example of how Congress can help facilitate an orderly transition of our economy and make the housing sector greener.

► Colorado and Oklahoma are fighting over the National Western Stock Show.

► CDOT is warning of more potential road closures in Glenwood Canyon because of the likelihood of flash flooding.

► Data shows that the number of unsheltered homeless people in Denver has TRIPLED since 2014.

► The Washington Post reports on a truly bizarre proposal from South Dakota:

South Dakota Gov. Kristi Noem may seek the 2024 Republican presidential nomination. Immigration — specifically, across the U.S.-Mexico border — inflames the party’s base. Now, a GOP megadonor has made “a private donation” to facilitate sending up to 50 South Dakota National Guard troops to our southern doorstep.

Noem announced the deployment yesterday in a statement that blistered President Biden’s handling of illegal border crossings, as U.S. and Customs and Border Protection reported intercepting 180,034 migrants in May — a new 20-year high.

The unusual financing caught pretty much everyone’s eye, generating a lot of “can they do that?” responses to the prospect of a Republican donor greasing the way for a Republican officeholder to use her official powers in a manner that lines up neatly with her potential future political interests.

This bizarre deal may actually be legal, though it is plenty concerning to military leaders.

► Of course Rep. Lauren “Q*Bert” Boebert wants to be included on a commission that will look into the January 6 insurrection.

► The Governor of Maine vetoed a bill that would have partially decriminalized prostitution as part of an effort to fight sex trafficking.

► As Dana Milbank writes for The Washington Post, Democrats appear to have much better records than Republicans when it comes to supporting police officers, despite the rhetoric you hear from the GOP:

How, then, to explain the latest “legislative scorecard” from the National Association of Police Officers, a group claiming to represent a quarter-million officers who endorsed President Donald Trump’s reelection?

McCarthy, Stefanik and Banks all scored 57 percent, and some of the back-benchers piling on Tuesday — Reps. Ken Buck (Colo.), Jody Hice (Ga.), Mo Brooks (Ala.) — scored a paltry 43 percent on NAPO’s pro-police scorecard.

Milbank is right when he says this is an example of “Blue Lies Matter.” Congressman Ken Buck (R-Greeley) is a bit touchy about this.

Anti-semantic, you say? Is that like someone who opposes languages? 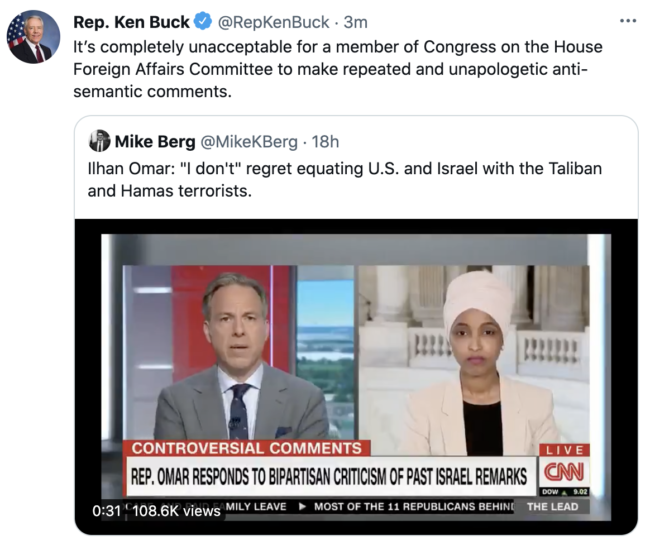 ► Former President Trump was scheduled to appear at an event in Alabama on Saturday before some geniuses decided to cancel out of concern that it might become a “partisan political event.”

► Check out the new episode of The Get More Smarter Podcast, featuring an interview with Jon Murray of The Denver Post about his big profile story on the Libertarian Party and its Colorado founding: