(Not shady at all – Promoted by Colorado Pols)

Calling itself a “Political Union” and claiming that “the real enemy of conservatism is Globalism,” PRC PAC says its mission is to “expose ruling class politicians and (focusing on the Republican party) replace them in primary elections.”

PRC’s website is rife with conspiratorial language about “Globalist elites,” and references the “Great Reset,” a conspiracy theory claiming that the coronavirus pandemic is a tool of the World Economic Forum to establish a new global government.

In a recent podcast, PRC PAC founder Bill Luznicky floats the conspiracy that not only was COVID created by a Chinese lab as a bioweapon, but that the United States and Dr. Anthony Fauci funded the project on behalf of the “globalist ruling class.”

Luznicky concluded by laughing and saying,:

“Everyone says ‘oh now you’re getting into conspiracy areas, Bill.’ Well, it’s not a conspiracy if it’s true.”

PRC also promises that it will adhere to standard non-profit best practices of directing 80% of contributions to its mission of replacing establishment Republicans with “America First Patriots.”

“Because the operational model for PRC PAC is somewhat unique, the ‘business model’ will be more reminiscent of a charity than a traditional Super PAC,” states the PRC website. “Good Practice Standards for charitable organizations are generally accepted as 80/20 (80% of revenues going towards the cause with 20% used for fundraising and overhead).”

However, Federal Election Commission records show that PRC PAC hasn’t made a single independent expenditure or donation to another committee since its inception in 2018. That doesn’t mean it hasn’t been spending donors’ money, however. The group classifies all of its spending as “Other Expenditures.”

According to FEC records, nearly all of the money raised by PRC PAC has been paid out to a single company, Medsabi LLC, which is owned by Luznicky.

Judging from the first report of this year, PRC PAC is growing. Through May, it’s raised about $44,000 and spent nearly half of that on Medsabi.

In all of these reports, the expenditures are listed variously as “digital services,” “custom coding,” and “welcome packs.”

Since the Supreme Court’s Citizens United decision legalized super PACs, shady so-called “scamPACs” have exploded in popularity. These entities typically use outrageous scare tactics to raise money from gullible donors and then spend most of those dollars paying consultants rather than supporting candidates.

At first glance, PRC PAC’s pattern of spending most of its money on a for-profit company owned by its founder appears to fit the mold, but PRC PAC is different.

Documents on its website indicate that the PRC PAC structure is inspired by, and possibly operates as, a “multilevel marketing business,” such Mary Kay or Avon.

Donors are considered “Independent Affiliate Members” who are encouraged to recruit other members below them and who receive commissions based on the donations and purchases made by any members they’ve recruited to their “downline” team.

7.1 – Sales Goals The foundation of a successful enterprise can be found on two platforms, developing and expanding donations by individuals who will become repeat donors and the development (enrollment, encouragement and continued coaching) of a downline team. IAMs receive bonuses and commissions based on the actual donations from personally sponsored new members and downline IAMs.” From a since-removed disclaimer page of the PRC PAC website.

Reached for comment Luznicky denies that the PAC function like a multi-level or “network marketing” business. He expressed surprise that the document quoted above was on the website.

Following the Colorado Times Recorder’s inquiry, the “Sales Goals” page was removed from the PRC website. But numerous other documents and videos remain on the site, all indicating that members can receive compensation.

A blog post titled, “What is a Political Union? It’s An Idea Whose Times Has Come,” claims that “internal financial incentives will replace expenditures on consultants.

“We will form a Super PAC that operates as a Political Union. To stay independent from Big Money, we will collect dues from membership to build a war chest that can be used to fund campaign ads… Instead of paying establishment consultants millions of dollars to ‘guide us’ through the political process, we will offer internal financial incentives to members willing to help us organize and grow.”

Whether or not commissions are paid, PRC PAC still models its recruitment and growth strategy after a multi-level marketing format. Members can become group, or “cell” leaders by generating $600 in donations in a single month from those new members they’ve recruited. 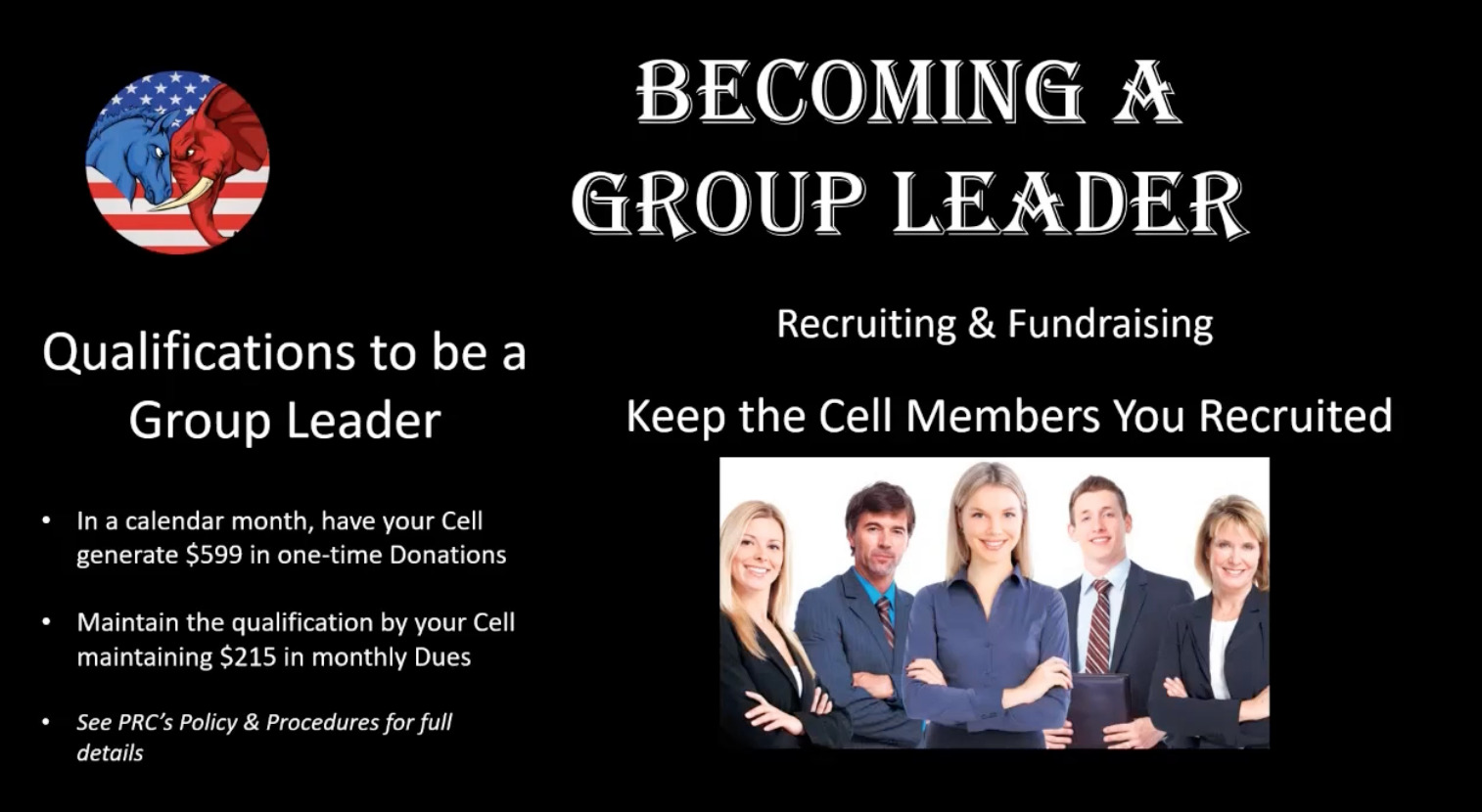 Political contributions are an esoteric means of supporting a cause. People give money to a candidate or cause they support, and hope the campaign or organization uses their funds wisely. PRC PAC encourages its supporters to take action themselves and offers them the tools to do so…for a price.

A PRC PAC yard sign will set you back $35, plus another $4 for the stand. How about a pack of 50 PRC PAC brochures? That’ll be $66. The brochures are available under the “Membership Aids” section of the store, with the intention of being purchased by members to recruit new members to their “cell.”

The PRC webpage offering the brochure reads, “This ‘third-party credibility’ piece helps you exercise influence with a powerful professional presence.”

Another page offers new members tips for recruiting their own first two members:

“See below for suggestions on contacting prospects in-person…They need to view PRC PAC as a large growing movement. It needs to be bigger in their eyes than just a couple of people. You accomplish this by using Leave-Behind materials. By far, the most effective is the tri-fold brochure.”

Since the FEC considers all members’ donations and “dues” to be political contributions, the flyers, signs, t-shirts available in the PRC PAC store are all technically gifts in exchange for non-deductible political donations.

PRC PAC did make one significant expenditure recently. It spent $5,000 to sponsor KNUS’ booth at the Western Conservative Summit. Luznicky and another PRC PAC founder, Coloradan Todd Workman, have both appeared on air with KNUS’ Corporon and also had the RNC Committeeman on their own podcast. The pair discussed their partnership with Corporon in another podcast episode:

“They’re going to be giving us love on the radio,” said Workman. “We’re going to have exposure like we’ve never had before. Randy Corporon is going to be doing some advertisements for us. He loves what we’re doing and he wants to help us any way he can.”

Corporon has not responded to a request for comment. This article will be updated with any response received.

Whether or not PRC PAC is functioning as an actual multi-level marketing operation or just using network marketing recruiting tools and sales language to solicit repeat donations, its claim of focusing on “primarying RINOs” combined with the conspiratorial nature of its content — the election was stolen, the coronavirus is a bioweapon, etc — reflect two well-documented national trends: far-right activists, including conspiracists, “taking over” the Republican party from the inside, and conspiracies being promoted by top multi-level marketers via their social networks.