On Wednesday, the nonpartisan staff of the Colorado Independent Congressional Redistricting Commission released its first look at a potential new map for 2022. Colorado Pols readers had a lot to say about the new proposed map (click here for a better browsing version), and with good reason.

After spending more time looking at the new map and the associated data, we thought it might be helpful to publish a short Q&A in which we provide both the questions and the answers. Let’s get to it…

A: Well, sort of. But before we go any further, you must understand that this is a PRELIMINARY map drawn by the nonpartisan staff of Colorado’s Independent Congressional Redistricting Commission. Every redistricting process eventually has to start somewhere, and that’s what we have here — a start. The final map approved for the 2022 election cycle will look different than this; the question is more about HOW different it will be.

THIS IS A PRELIMINARY MAP!!! Breathe, people. Breathe. #copolitics

This initial map has not been endorsed or rejected by the Redistricting Commission, members of which will travel around the state in July and August to hear comments and concerns about various options for re-drawing the districts. If members of the public, especially ones waking up to see Golden/Lakewood and Douglas County in the same district (see below) have a chance to weigh in on some of these proposals, it’s hard to imagine how this map doesn’t change.

Q: At first glance, which political party comes out ahead in this map?

A: Oh, the Republicans, and it’s not even close. As Kyle Clark explained Wednesday evening on 9News (“Next with Kyle Clark”):

“The preliminary map for eight congressional districts in Colorado is a dream for Republicans.”

Again, this map will undoubtedly change. But if it didn’t — or if the final one looks similar — this is a really, really good map for Republicans.

It’s quite possible there would be a 4-4 split in Colorado’s U.S. House delegation with this map. In a Democratic state. #copolitics

This is not at all reflective of Colorado’s actual electorate, which chose Democrat Joe Biden for President in 2020 by a 13-point margin and Democrat John Hickenlooper by a 9-point margin. Go back another cycle, to 2018, and you see that Democrats won EVERY statewide race on the ballot, including Governor (Democrat Jared Polis won by 11 points).

Colorado’s current Congressional makeup includes four Democrats and three Republicans. Democrats have consistently gained ground in Colorado over the last decade, while Republicans have declined; in that context, giving Republicans another seat is hard to defend.

Q: But Republicans are saying that this map favors Democrats…

A: Of course they are. It’s in the interests of Republicans to attempt to spin things differently than they appear. Here’s a good example of that narrative attempt:

The only way you can explain this as a 5-3 Democratic map is if you base new district lines SOLELY on Democrat Joe Biden’s 13-point margin of victory in Colorado from 2020. The last election cycle was very good for Democrats in Colorado in a year with an incredibly-unpopular incumbent Republican President on the ballot. The new map could be considered a 5-3 Democratic advantage in only this scenario, which would ignore the other nine years that are supposed to be included in the redistricting discussion.

The redistricting process that takes place every 10 years should account for population changes and demographic shifts from the entire previous decade. Focusing on the 2020 presidential race in Colorado only serves people with an agenda to skew the map to the left, or to help lazy political analysts construct a superficial reading of the state’s politics.

Q: Some of these districts combine areas that are not very similar. Is this supposed to happen?

A: One of the major factors that must be considered in the drawing of new maps is about maintaining so-called “Communities of Interest,” which seems to have gotten overlooked in many places. Look at the proposed lines for CD-7, for example: 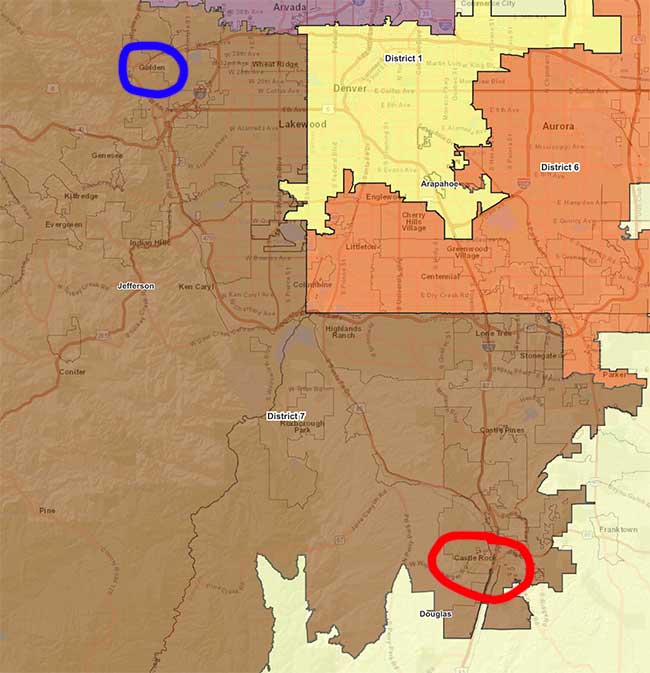 The proposed boundaries of CD-7 are shaded in a lovely puke-brown color.

Golden and Castle Rock are communities of DIS-interest. It defies common sense to draw a city in Northwest Jefferson County into the same district as a city in far Southeast Douglas County. This is like trying to make an edible sandwich out of peanut butter and bologna.

The problems with CD-7 in the preliminary plan show what happens when you’re too focused on “balancing” a map between two unequal political parties at the expense of rational district boundaries.

Q: What are some of the other notable changes in this new map?

A: We discussed some of the irregularities with CD-7 above, so we’ll focus elsewhere in answering this question.

♦ CD8: Everybody was excited to see where Colorado’s newest Congressional district might end up. As we noted a few weeks ago, a proposal from the Colorado Hispanic Chamber of Commerce creating a new district north of Denver seems to be gaining traction. 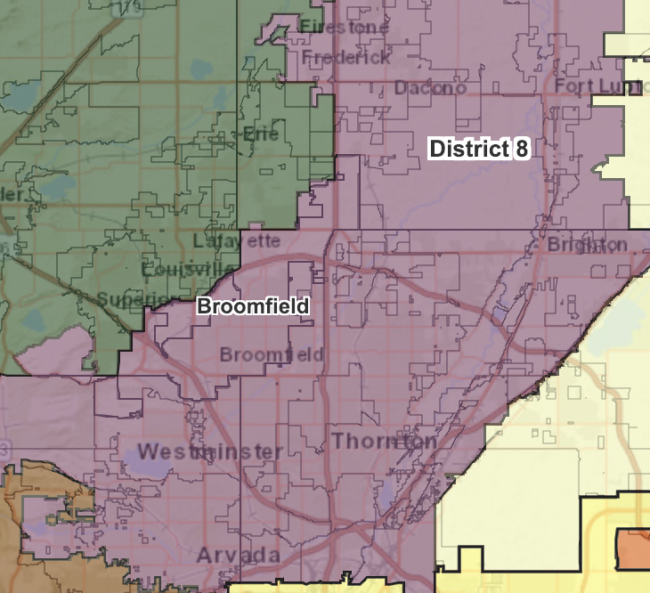 ♦ Pueblo: In the new map, Pueblo is drawn completely out of CD-3 and moved into a CD-4 that encompasses most of Eastern Colorado, from Wyoming to the North and New Mexico to the South. 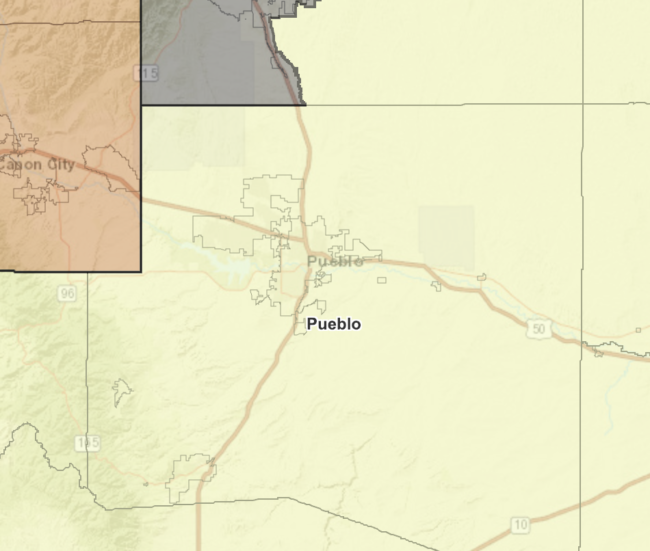 ♦ Western Boulder: Under this map, the western half of one of Colorado’s most liberal counties ends up in CD-3, which has traditionally been one of the most conservative areas in the state. 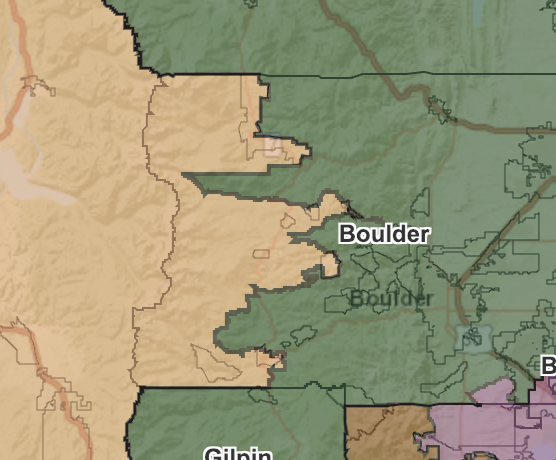 ♦ Dirt: The current boundaries for CD-3 encompass most of the land in Colorado, stretching from the Western Slope to Southern Colorado. In the new map, CD-4 takes some of the CD-3 landmass to create two districts that would seem to be more geographically-manageable. 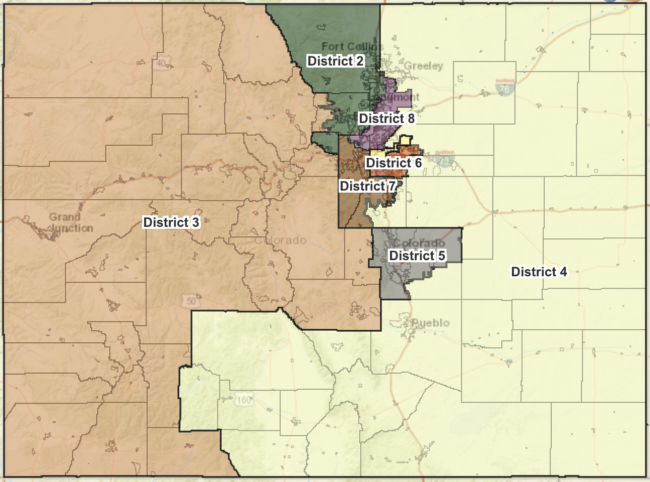 A: More public feedback and discussion. Check out the Redistricting website for more information on how you can make your voice heard.

Next week (June 28) the nonpartisan staff will release an initial map for state legislative seats, which will be considerably more complicated than the Congressional map.