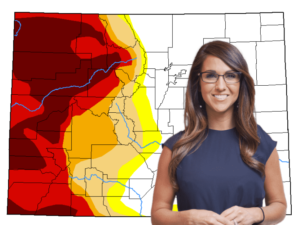 Denver7’s Blair Miller reported late last week about the growing disparity between an unusually wet spring’s worth of rain along the Front Range of Colorado and on the Eastern Plains, while areas of the state west of the Continental Divide remain in historic drought:

Colorado’s drought situation continues to be a tale of two halves of the state, with the eastern half nearly entirely drought-free as of this week and the western half under moderate-to-exceptional drought conditions…

Because the area of the state suffering from drought is almost entirely west of the Continental Divide, most of the affected area is represented in Congress by freshman GOP Rep. Lauren Boebert, who sits on the House Energy and Natural Resources Committee. At a hearing late last month on the drought crisis affecting much of the western United States including western Colorado, Boebert had a chance to contribute intelligently to the discussion–or at least keep focused on the subject, which was the drought.

As Gizmodo’s Molly Taft reported Friday, Boebert didn’t take it. Instead, Boebert spent her allotted question time berating an Interior Department official for her supposed “ethics problems” due to environmental advocacy work before the Biden administration–an axe Boebert is grinding along with two of the hardest-right western Republicans in Congress:

As Boebert demonstrated in last month’s committee hearing, uncovering Elizabeth Klein’s supposedly nefarious agenda to be a big meanie in court to the oil and gas industry is the more pressing issue than the drought gripping almost all of Boebert’s district:

After Klein’s testimony, which mostly covered the scientific facts of the water shitstorm the West is in right now, Boebert used her five minutes of questioning to badger Klein about her ethics obligations, including accusing her of “help[ing] infiltrate state governments with Green New Deal extremists for the sole purposes of suing the federal government on environmental policies you all disagreed with.” Boebert was chastised by the hearing’s chairman, Rep. Jared Huffman, for not sticking to the issue (you know, the catastrophic drought that we all need to figure out a way to deal with), but she nevertheless used her closing arguments to accuse Klein of “slither[ing] her way into a high-level position at the department that doesn’t require the scrutiny of a public confirmation process” while calling her an “extremist partisan hack,” which is honestly pretty incredible coming from Boebert.

After Boebert appeared at a virtual hearing of the Energy and Natural Resources Committee with numerous firearms precariously jumbled together on the shelves behind her back in February, it became evident that her work on the committee would not be substantive as much as, you know, performative. As for staying on the issue, it looks like even on a matter of dire importance to Boebert’s constituents she cannot be expected to remain on task. Because Boebert knows nothing about the issues, she simply has nothing useful to contribute. The off-topic bombast is a deflection from Boebert’s lack of comprehension.

On a practical level beyond her long record of pre-congressional outrages, this is why Marjorie Taylor Greene lost her committee posts in a vote by the House earlier this year. It was an easy guess that every committee meeting in which MTG participated would devolve into a circus. If Lauren Boebert can’t participate in a single hearing without making a distraction of herself and embarrassing the voters who put her in office, maybe it’s time for Boebert to join MTG on the light duty roster?

It doesn’t seem like CD-3 would be losing much.